02) Even Better Than the Real Thing

09) Tryin' to Throw Your Arms Around the World 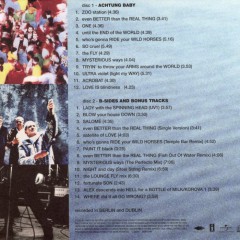 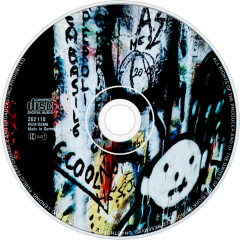 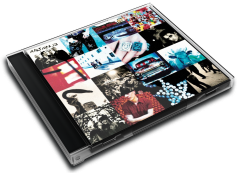 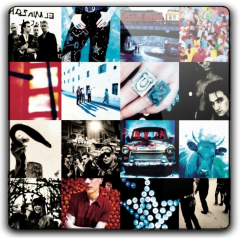 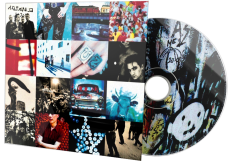 Achtung Baby is the seventh studio album by Irish rock band U2. It was produced by Daniel Lanois and Brian Eno, and was released on 19 November 1991 on Island Records. Stung by the criticism of their 1988 release Rattle and Hum, U2 shifted their musical direction to incorporate alternative rock, industrial, and electronic dance music influences into their sound. Thematically, the album is darker, more introspective, and at times more flippant than their previous work. Achtung Baby and the subsequent multimedia-intensive Zoo TV Tour were central to the group's 1990s reinvention, which replaced their earnest public image with a more lighthearted and self-deprecating one.
Seeking inspiration on the eve of German reunification, U2 began recording Achtung Baby at Berlin's Hansa Studios in October 1990. The sessions were fraught with conflict, as the band argued over their musical direction and the quality of their material. After tensions and slow progress nearly prompted the group to break up, they made a breakthrough with the improvised writing of the song "One". Morale and productivity improved during subsequent recording sessions in Dublin, where the album was completed in 1991. To confound the public's expectations of the band and their music, U2 chose the record's facetious title and colourful multi-image sleeve.
Achtung Baby is one of U2's most successful records. It received favourable reviews and debuted at number one on the US Billboard 200 Top Albums, while topping the charts in many other countries. Five songs were released as commercial singles, all of which were chart successes, including "One", "Mysterious Ways", and "The Fly". The album has sold 18 million copies worldwide and won a Grammy Award in 1993 for Best Rock Performance by a Duo or Group with Vocal. One of the most acclaimed records of the 1990s, Achtung Baby has regularly been featured on critics' lists of the greatest albums of all time. The record was reissued in October 2011 to commemorate the 20th anniversary of its original release.

User Album Review
Or how U2 reinvented themselves into something deliciously post-modern. After taking being earnest to new levels with their part-studio, part-live homage to America, Rattle & Hum in 1988, U2 realised that to keep their exalted position as 'Greatest Rock Band In The World' from up-and-coming whippersnappers such as REM, they needed to do something radically different. So, glitter, glam and irreverence replaced large hats, furrowed brows and facial hair. Working again with their production team of Brian Eno and Daniel Lanois, they created a noise that was irresistibly modern yet absolutely classic. And for a while in rock, it was impossible to escape from the spell and influence of Achtung Baby.
Recorded in Berlin and Dublin, the album feels similar in many respects to David Bowie’s Low and “Heroes”, and, in Eno, they had a direct link with the period. Opening with The Edge’s guitar squall and electronics, this dense sound is irresistible; sometimes, this creates moods rather than hummable tunes, such as on “The Fly”, “Zoo Station”, Acrobat”, yet it also contains the grandstanding stadium-sized “Even Better Than the Real Thing”, the baggy-influenced “Mysterious Ways” and arguably the greatest U2 anthem, “One”. The relentless playing down of their previous seriousness (the title was a line from Mel Brooks’ The Producers) actually made U2 even more unassailable
Later, lots of other lesser groups donned make-up and went po-mo (INXS, Deacon Blue) poorly, but under the pretence of not caring very much, U2 painstakingly crafted an album of incredible depth and texture.