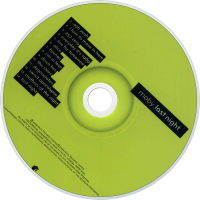 Last Night is the eight studio album by American electronica musician Moby, released on 29 March 2008. The first single in the UK was "Alice", and in Europe was "Disco Lies" and the second single is "I Love to Move in Here" followed by "Ooh Yeah".
On his official website, Moby stated that this album is "a lot more dance-oriented and electronic than my last few albums, probably as a result of all of the DJ'ing I've been doing lately". He also wrote that:
Last Night is basically a love letter to dance music in New York City. What I love about the New York approach to dance music is the eclecticism and the open minded-ness on the part of the musicians, the DJ's, and the people in the bars and clubs. In making Last Night, I essentially tried to take a long 8 hour night out in New York City and condense it into a 65 minute long album.
The album was recorded in Moby's home studio in Manhattan, New York and features a number of guest vocalists, including Wendy Starland, MC Grandmaster Caz (one of the writers of "Rapper's Delight", which boosted the popularity of sampling, a common method to make the music on Moby's 1999 blockbuster Play), Sylvia from the band Kudu, British MC Aynzli, and the Nigerian 419 Squad.
On November 3, 2008 in the UK and November 25, 2008 in the U.S., a remix album of Last Night entitled Last Night Remixed was released.

User Album Review
So, after the rock dabblings of 18 and the like, Moby returns with...what? Has the 42-year old friend of advertisers the world over made a mid-life crisis album? Is that 'last' in the title a literal reference to a night out on the New York club scene, or is it the bald one's elegy to his last ever clubbing forays? Certainly Last Night, stuffed as it is with old-skool house and hedonistic club bangers, has more than a certain whiff of nostalgia about it.
Supposedly chronicling a night out on the tiles in the Big Apple, LN is a bold return from wrong-headed experimentation. However those who only know of his return through the single, Alice may be wrong-footed. Alice itself, a low-end rumble of electronica and hip hop, is a killer track, but the rest of the album covers quite a diferent spectrum of sound. At least half of it is day-glo rave in nature, from opener, Ooh yeah, to I'm In Love and I Love To Move In Here.. It's all sequencers and glow sticks As the song title says Everyday It's 1989. So is Moby recalling his youth or is he genuinely interested in reintroducing the world to his own smiley face? The fact is that he has obviously updated his sounds to match current trends as well. Disco Lies and The Stars are equal parts Black Box and Justice. Whether this is a good thing all depends on where you are when you hear it. On the dance floor it's going to be unstoppable. It's on the more monumental, ad-friendly tracks that he comes a cropper. Mothers Of The Night and Hyenas are the kind of coffee table fare that got him hated by so many in the first place.
Naturally, as the night's story arc peters out the vibe gets more languid. Degenerates is a slo-mo dredge through the chemical afterburn; post indutrial and a little creepy, while hidden track Lucy Vida is a gorgeous spill through jazzy exhaustion. If you're a child of the late '80s then these thumping pianos and retro synths will make you glad again. But as a template for longevity, Last Night doesn't auger well. It may just be Moby's final fanfare.