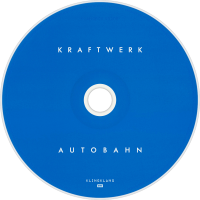 Autobahn is the fourth studio album by German electronic band Kraftwerk, released in November 1974. The 22-minute title track "Autobahn" was edited to 3:27 for single release and reached number 25 on the US Billboard Hot 100 chart and number 22 in the Australian chart, and performed even higher around Europe, including number 11 in the UK. This commercial success came after the band had released three experimental and purely instrumental albums. The single was believed to be Vertigo Records' only ever international hit.

Album Review
Autobahn is an iconic record made up of several essential elements: the graphic motorway symbol on the cover, the slamming of a car door and starting of an engine that precede the music, the rasping vocals and the whoosh that imitates the approach and passing of cars. It’s a 22-minute synthetic symphony to the possibilities of road travel that combines seemingly innocent enthusiasm with a note of deep caution.
Its melodic progress and the sheer pleasure taken in exploring the sonic possibilities of the newly available synthesizer make it as accessible to an eight-year-old as the most wizened critic. Although the lyrics of the title track hint briefly at the presence of nature in the sun’s glittering rays and the green edge of the motorway, it’s roundly addressed by the suite on the original b side of the record. Although less familiar, the four instrumentals represent a counterbalance to the harsh industrial daylight of Autobahn. They trace a journey that takes in night-time comets, an eerie midnight and ends with a morning walk serenaded by flutes and acoustic piano.
The motorway is an all-too-familiar presence in our lives, but listen to parts of the title track – for example, the passage that begins 10 minutes in – and it’s clear that Kraftwerk are holding up a mirror to the world to reveal its strangeness. Although the group have occasionally been chastised for failing to present a more critical perspective, Autobahn’s deliberate ambiguity is an essential aspect of art and has ensured its longevity 35 years after its original release.
Autobahn is the first of eight albums that Kraftwerk have chosen to re-master and re-release. Although a controversial decision in some quarters, its predecessors Kraftwerk 1 and 2 are lesser works that lack the thematic unity and musical distinction of the rest of the group’s oeuvre. As with the other reissues, much effort has clearly been devoted to the remastering and presentation of the work and the uniting of Emil Schult’s illustrations with the UK motorway symbol is particularly satisfying. Absolutely essential.