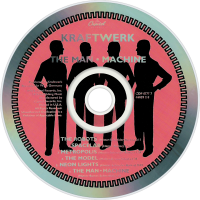 The Man-Machine (German Language Edition: Die Mensch-Maschine) is the seventh studio album by German electronic band Kraftwerk, released in May 1978. It contains the song "The Model" which was a chart-topping single in the UK in 1982.

Album Review
The opening passage of The Man Machine, released in 1978, is a very particular vision of the future. It's the chatter of servo-motors, the slow whine of monorails, of control signals manipulating remote machines. It's the sound of abstracted production. Over six tracks and 36 minutes, Kraftwerk thoroughly and succinctly explore the impact of technology upon humanity. It's their defining theme and one which makes the group arguably the most important in the canon of popular music.
Opening track The Robots is a remarkably confident statement which sounds contemporary more than 30 years later. It's difficult to imagine a world before the synthetic sounds essayed here became so influential. The words themselves are a manifesto: “we're full of energy / we're dancing mechanic". Kraftwerk embrace the repetition inherent in dance music and equate it with the automation of industry.
Spacelab and Metropolis are instrumentals full of pathos and wonder. Their references to science fiction made fact and Fritz Lang’s vision of a future dystopia highlight cultural references that provide extra context for the album’s themes. The Model became a UK number one on its reissue in 1981 and as a result is probably the group’s best-known song. It identifies an object of desire, a female counterpart for the man machine.
Neon Lights may be Kraftwerk’s most beautiful composition. It’s a hymn to the unintended beauty of modern life whose synthesizer melodies evoke the neon glow of the city. Once again the music is utterly consistent with the lyrical subject. The album ends with its title track echoing and haunted, gliding effortlessly into a future that is now well on its way to arriving.
The Man Machine is remarkable for its consistency, elegance and absolute deliberation. It’s made all the more powerful by the marriage of Karl Klefisch’s El Lissitzky-quoting design and the group’s appearance as minor variations on a single theme. The remastering and inclusion of previously unavailable photography make this reissue the definitive edition.