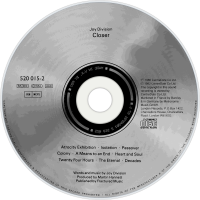 Closer is the second and final studio album by the English post-punk band Joy Division, released on 18 July 1980, following the suicide of lead singer Ian Curtis two months earlier. When Closer came out, Sounds' Dave McCullough remarked that there were "dark strokes of gothic rock".
The record was released on the Factory Records label as a 12" LP and reached #6 on the UK Albums Chart. It also peaked at #3 in New Zealand in September 1981. It claimed the number one slot on NME Album of the Year, and was included in the book 1001 Albums You Must Hear Before You Die.
The album cover was designed by Martyn Atkins and Peter Saville, with photography from Bernard Pierre Wolff. The photograph on the cover is of the Appiani family tomb in the Cimitero Monumentale di Staglieno in Genoa, Italy, by Demetrio Paernio.