Leaders of the Free World 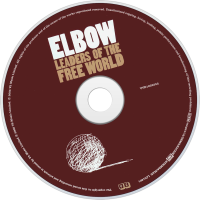 Leaders of the Free World is the third studio album from the British alternative rock band Elbow, released on 12 September 2005 in the UK and 21 February 2006 in the US on the V2 record label. The Japanese version of the album (released on 7 September 2005) features two bonus tracks, "McGreggor" and "The Good Day", which were both B-sides to the first single "Forget Myself". Leaders of the Free World was entirely self-produced at Blueprint Studios in Salford, Manchester, a space the band hired for the duration of their recording sessions. The album reached number 12 on the British albums chart.
The band teamed up with video artists The Soup Collective to produce an integrated music and video DVD to accompany the album. In the UK, there was a limited edition release of the CD and the DVD in a gatefold sleeve. When released in the US, initial limited copies contained the bonus DVD (with alternatively-colored green artwork).
The song "Mexican Standoff" was also recorded in Spanish. This version appears as a B-side to the "Leaders of the Free World" single.
The album was certified gold (sales of 100,000) in the UK by the BPI on 24 April 2009.