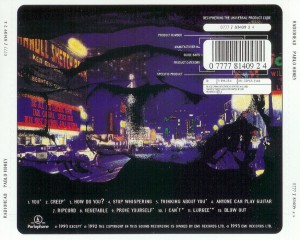 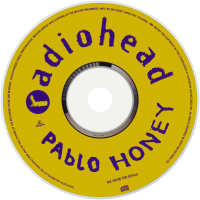 Pablo Honey is the debut studio album by the English alternative rock band Radiohead, released in February 1993. The album was produced by Sean Slade and Paul Q. Kolderie and was recorded at Chipping Norton Recording Studios and Courtyard Studio, Oxfordshire from September to November 1992. It features three charting singles: "Anyone Can Play Guitar", "Stop Whispering" and perhaps the band's most well-known hit on mainstream radio, "Creep". Pablo Honey peaked at #22 in the United Kingdom charts and went platinum there and in other countries. The album title comes from a Jerky Boys prank call skit in which the prank caller says, "Pablo, honey? Please come to Florida!" to his victim. This snippet is sampled by the band on the track "How Do You?".

Following the release of Pablo Honey, Radiohead would digress from its alternative rock influences toward more expansive and experimental works. The album received a generally favourable critical reaction, but was criticised for its derivative sound and inclusion of underdeveloped songs, and has been unfavourably compared to the band's subsequent albums. It has, nonetheless, been cited by listeners and critics as one of the best debut albums of recent years.

User Album Review
Oxfordshire's best-known musical export have been voicing the angst of an inarticulate generation for the last fifteen years, kicking off with Pablo Honey, their exploration of suburban, adolescent self-awareness. Released when the boys still glistened with the sheen of an expensive private education and set against the more mature redneck, white bread, blue-collar roar of Nirvana, Radiohead's intelligent, delicate take on the loud/soft, quick/slow language of grunge appeared spineless and effete until Creep was released and set the record straight.

Massively backed by UK 'indie' radio, the single became a hit in the slacker student community, and simultaneously established the band as serious musicians, with interesting points to make and hefty musical skills with which to drive them home.

The band's apparent overnight success came after years of dedication (even keeping in touch while away at various universities) and endless free time spent in rehearsal. They'd toughened up and tightened their sound on the road before setting out to make the album, and had grown the confidence to expand ideas across lengthy instrumental breaks that other new kids in the studio might fear to try.

It all resulted in a stunning blend that combined the best aspects of prog rock (challenging lyrics, deft chord changes, novelty time signatures and so forth) with the plaintiveness of bedsit singer song-writing and the sound of expensive equipment thrashed at by experts. Though later albums were better received, this remains one of rock's most impressive debuts.