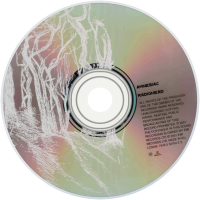 Destaques para "Life In A Glass House", "Like Spinning Plates", "Knives Out", "Pyramid Song" e "I Might Be Wrong".

Album Review
Amnesiac was recorded at the same sessions as the expectation-defying (read: not many tunes) Kid A. This fifth album from the Oxford boys came out nine months later and, at the time of its release, Thom Yorke spouted a lot of nonsense about gnosticism and the fact that it was, like, an explanation of Kid A's voguish electronica-as-misanthropy. The fact was: this was the offcuts and the stuff that didn't quite fit. Lucky for us that it was still bloody marvellous.
Amnesiac is a simpler album than Kid A. Understandably, being less worried over, the pieces are easier to digest. The self-loathing and general railing about modern existence is still there, but at times the band relax enough to let in some exquisite tunes. Pyramid Song's jazzy slouch backed by strings-to-swoon-by is the album's rightful centrepiece, but the delights are many. There's edgy urban paranoia. ("I'm a reasonable man, get off my case" mutters Yorke on Packt Like Sardines In A Crushd Tin Box), political pugnaciousness (You And Whose Army?) and sheer post rock misery (Knives Out).

There's a good case to argue that Amnesiac and Kid A - born out of the same writer's block and new methodology - should never have been separated. Much as Beatles fans will tell you that the White Album has the kernel of one classic at its heart, so do these twins. Of course there's a whole other school that revel in the less comfortable chunks of this sonic feast. To them this melange of dissonance, clicks and backwards voices only adds to the mystique, the dislocation and the overall sense that somehow Radiohead UNDERSTAND what's going on more than us poor sheep.

The truth, one suspects, lies somewhere in between. Yorke's anger and confusion has weathered well. These slices of prog electronica created dismay amongst the critics at the time. Now, in the light of civilisation's continual decline, they seem like the reasonable musings of someone perfectly sane. "Cut the kids in half", indeed...