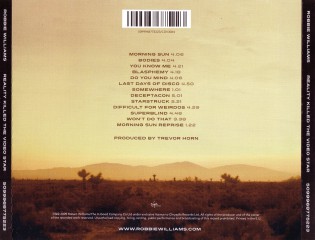 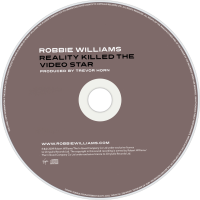 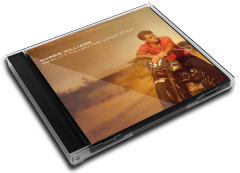 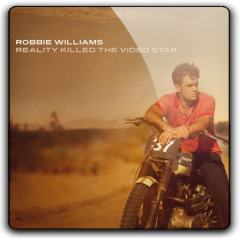 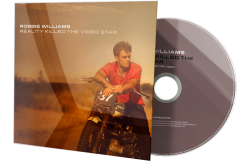 Reality Killed the Video Star is the eighth solo studio album by the British singer-songwriter Robbie Williams, released in November 2009. The album was produced by Trevor Horn and recorded between September 2008 and August 2009 in London and Los Angeles. It debuted in the top ten of 22 national album charts worldwide, and has received varying reviews from music critics. It incorporates elements of pop rock, dance-rock, alternative rock and adult contemporary music. Reality Killed the Video Star was viewed by critics and fans as being Williams' "comeback album" after the relative failure of his 2006 release, Rudebox.
The album was preceded by lead single "Bodies" released in October 2009. Other single releases include "You Know Me" and "Morning Sun". The album has been certified platinum in Europe for sales of over one million copies, including 900,000 copies sold in the UK alone. Despite this, it was Williams' first studio album not to reach number one on the UK Albums Chart, beaten to the top spot by a margin of less than 1% by the UK boy band JLS's self-titled debut album.Reality Killed The Video Star was Williams' first studio album in three years. In that period, he worked with many producers, including Guy Chambers, Soul Mekanik, Mark Ronson, and Trevor Horn. However, the British singer confirmed in August 2009 on his official website that the entire album was produced by Trevor Horn, and added that it was recorded in London.
Rumours of a new studio album co-written with Chambers had surfaced in early 2007, along with known commitments required by Williams to complete his EMI contract. British singer-songwriter Laura Critchley commented that she had sung vocals for three songs, and said that the LP would not be released until 2009. At first it was believed that Williams had reunited with Chambers, but it was later confirmed that the song "Blasphemy" was co-written by the pair during the recording sessions of Williams' 2002 album Escapology.
In February 2009, it was confirmed that Williams had written material with Soul Mekanik, Chambers and Ronson. The singer's spokesman, Tim Clark, said that the artist was planning to begin recording sessions in March and that the new album would be released in late 2009.[22] The album was mostly written in Williams' home studio and was recorded in London. Amongst those who collaborated in the songwriting were Danny Spencer and Kelvin Andrews, Brandon Christy, Craig Russo, Richard Scott and Scott Ralph, Chas Jankel and Fil Eisler.
On his official website, Williams wrote that he was working with producer Trevor Horn on his new album; he described himself as "buzzing" and went on to call the album's sound "Very, very big". Williams revealed that the new album would be titled Reality Killed the Video Star, a reference to the song "Video Killed the Radio Star" by Horn's former band The Buggles. The album was originally planned to be named Il Protagonista (Italian for The Protagonist) until Williams' management told him to change the title as it was "too pretentious".[24] In July 2009 Williams wrote on his official blog about the album: "My album's a killer: old Robbie, new Robbie and a Robbie that neither of us have met...". The A.V. Club has also reported that during 2007, Williams had recorded an unreleased experimental album that, he later said, would have amounted to "career suicide".
Before the album's release, Williams spoke about his hopes for the album: "I want people to feel elated, I want them to dance, I want them to forget about who they are and where they are for 50 minutes - and, within those 50 minutes of forgetting who they are, I also hope people relate to the songs. This is a record that I’m very proud of - I think it’s fucking brilliant. I want it to be the record that, if people think of Robbie Williams, they go, Yeah, Reality Killed the Video Star." He also talked about his collaboration with producer Trevor Horn: "He’s added something to the record that I haven’t had on previous records - his genius".
In the wake of Michael Jackson's death on 25 June 2009, Williams was reported to have written and recorded a last minute tribute song to Jackson that would be included on the album. The track, "Morning Sun", was co-written by James Bond lyricist Don Black. During his BBC Electric Proms concert at The Roundhouse in London on 20 October 2009 Williams said about the song: "I thought it was about Michael Jackson [...] but it’s actually about me again."

User Album Review
Reality Killed the Video Star marks Robbie Williams’ overdue return to the pop world, exuding a coolness and consistency absent on 2006’s Rudebox. It finds him working alongside producer Trevor Horn, whose catalogue of hits is substantial enough to turn even a sometime egocentric like Williams green with envy. And the pairing largely works well, with Reality”¦ featuring a wealth of strong, single-worthy tracks.
The first song to be released as a single, Bodies, isn’t the most immediate number on this 13-track affair, but acts as a valuable bridge between the swagger-and-strut front of Rudebox and the introverted, understated highlights to be found here. A strange brew of string flourishes, rumbling low end, oriental undertones and even an Enigma-style break into Gregorian territory, Bodies is superb on radio, sitting between so many sound-alike offerings, but seems a little bloated here. Nevertheless, it’s very much that wonderful clichÃ©: a return to form.
Last Days of Disco is a track that clicks on the very first listen ”“ reminiscent of Eurhythmics and featuring the inevitable line “don’t call it a comeback”, it’s a far better tribute to the synth sounds of the 1980s than anything from the hot-right-now La Roux. This is partly down to Horn’s involvement ”“ he produced much of his best-loved fare during the decade, and worked with the similarly styled Pet Shop Boys in 2006 ”“ but Williams’ half-whispered vocals suit the icy beats superbly. It’s not as recognisably Robbie as Bodies, but there’s no doubt it’s a far superior song.
Deceptacon ”“ unlikely to ever be confused with the Le Tigre song of the same name given its slow-motion build and luscious orchestral peak ”“ Blasphemy and Superblind are skilfully arranged tracks which find Williams in his comfort zone vocally, the music around him instead given license to soar. And it’s this balance between the star of the show and the necessary material he’s at the centre of that makes Reality”¦ his finest album since I’ve Been Expecting You. It’s got its share of hits in waiting, but the flow of the record is excellent when heard as a whole.
It’s not without its faults ”“ Williams’ lyricism still leaves much to be desired, especially on Won’t Do That ”“ but Reality”¦ is a record its makers can be very proud of indeed. The ego has landed, again, but he’s a lot more endearing this time around.