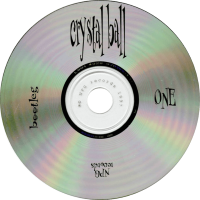 Crystal Ball is a four-disc box set by American recording artist Prince. It contains three compilation albums of "previously bootlegged" material, along with The Truth, a bonus disc of 12 new acoustic songs. Internet pre-orders included an instrumental album, Kamasutra.
Prince once planned to release a 3-LP album around 1986, also called Crystal Ball. That album was edited down to a 2-LP and renamed Sign "O" the Times. Its title track became the title track for this compilation, 10 years later.

Album Review
After clearing out his new stuff for Emancipation Prince began returned into the vault for the less commercial material he could put on his newly launched NPG Music Club website. Rather than look for B-sides and music owned by Warner Brothers, Prince cobbled together a triple album chock full of unreleased tracks, versions and demos, known only to bootleggers. Everything is out of vault, even the album’s title Crystal Ball is the original name earmarked for the Sign O’ The Times album. The best here is what was snipped from Come: Interactive, Days Of Wild and Acknowledge Me. There is reworked stuff too in the form of Love Sign and So Dark. But there is more to keep interest up across three disks – Dream Factory, Hide The Bone and The Ride. Great bass lines of 18 And Over and Poom Poom give this album a great mix. It all makes enviable hearing for most bands, if they had outtakes half as good as these at their disposal they would be delighted. If anything Crystal Ball demonstrates how good even Prince’s second rate music is. More releases like these will put the bootleggers out of business – let’s hope he will take note.