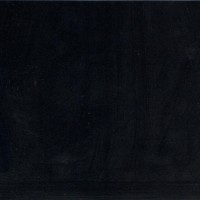 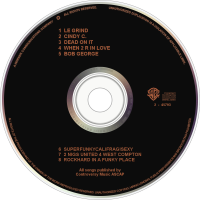 The untitled sixteenth studio album by Prince that was released on November 22, 1994. The album was originally planned for release on December 7, 1987, as the follow-up to Sign o' the Times and was to appear in a entirely black sleeve with no title or even a credit to Prince; hence it was referred to as The Black Album. Dubbed The Funk Bible by preceding press releases, and in a hidden message within the album itself, the work seemed to be a reaction to criticism that Prince had become too pop-oriented. It was his attempt to regain his African-American audience.
The 1987 promo-only release had no printed title, artist name, production credits or photography printed; a simple black sleeve accompanied the disc. On promotional copies, only a song listing and catalog number—25677—were printed on the disc itself. The commercial version was to only have the catalog number printed in the color pink on the spine. The original compact disc pressing was made by Sony DADC rather than WEA Manufacturing. The album was withdrawn a week before its release date, and was replaced with the album Lovesexy, a brighter pop-oriented album with elements of religious affirmation.

Album Review
Originally recorded for Sheila E’s birthday it later evolved into a release Prince intended as a club album. It was dubbed The Black Album because no cover nor name was ever given to it.

The songs were originally written in 1987 after the Sign O’ The Times sessions, but pulled from sale days before their intended release (8 December 1987) – Prince citing their excessive eroticism and violent lyrics (Warner Bros. fearing it’s sales potential). Prince hastily wrote a more enlightened replacement album, Lovesexy (When 2 R In Love is the sole survivor from The Black Album and transferring to Lovesexy). Prince still performed several songs from the withdrawn album during the Lovesexy Tour. A reference to the album is made in the video for Alphabet St. where the caption “Don’t buy The Black Album” is seen for a few frames scrolling in the background. With approximately 100 promotional copies in circulation following the withdrawal The Black Album became one of the most bootlegged albums in history, but got its eventual official release in November 1994 as The Legendary Black Album (packaged accordingly to retain its legendary forbidden mystique) albeit only to fulfill Prince’s contractual output for Warner Brothers which the label paid $1m to suede him to sanction the release.