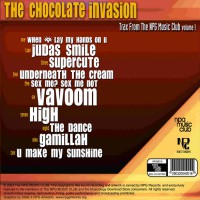 The Chocolate Invasion is the twenty-eighth studio album by Prince released only through his website, NPG Music Club. All the tracks except "The Dance" were previously available on the same website in 2001, although some may have rearrangements in music and/or lyrics. "U Make My Sun Shine", a duet with Angie Stone, was released as a single in 2001. Three more tracks had a limited release as CD singles during Prince's 2001 "Hit'N'Run" Tour: "Supercute", "Underneath The Cream", and "Gamillah". The album's title comes from a line in "Judas Smile". "The Dance" was later re-recorded and included on the 2006 album, 3121. All the tracks except "Judas Smile" and "The Dance" were at one point included on the aborted album project High.

Album Review
Volume one of what was supposed to be a seven disk set The Chocolate Invasion was only to be released with volume two, The Slaughterhouse. Comprising ten tracks (or for the sake of correct terminology, “trax”) these are the cream of the crop of the MP3s available separately over the life of the NPG Music Club before Prince lost his interest in that by 2004. The Chocolate Invasion is therefore excluded by many from Prince’s studio album discography but it is in all essence a compilation of previously unreleased and studio-finished music, and if Crystal Ball is always readily included then so should this. So is there anything good on it? Six songs are from Prince’s aborted High album, which was skipped in favour of the more worthwhile The Rainbow Children. The Dance is the only track to receive a full commercial release, via 3121, a fact that underlines this track as the best of the collection here. Others worthy of seeking out are When Eye Lay My Hands On U, Underneath The Cream and Vavoom. But because The Chocolate Invasion is a compilation rather than a collection of songs conceived for one album it’s makes quite an eclectic listening experience.