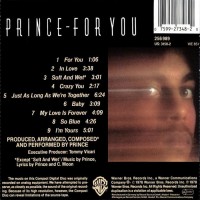 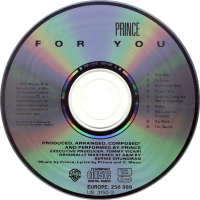 For You is the debut studio album by Prince. Released on April 7, 1978 (two months shy of his 20th birthday) and bearing the soon-to-be classic tag "Produced, arranged, composed, and performed by Prince", it is generally regarded as a promising but somewhat insubstantial early effort. The album peaked at #163 on the US Pop Charts (#21 R&B), and would go on to sell 430,000 copies domestically (983,000 copies worldwide).

Album Review
Prince was aged just 18 at time of the release of For You his debut album, and was the youngest all-in-one, producer, composer, and performer, in the history of major music labels. Like many of his later albums Prince not only wrote, provided all vocals, but played every instrument on the entire album.

For You contains mostly re-recorded songs from earlier demos dating from 1976/7 and the shortlist of the 20 tracks Prince had written to put on it. The album was recorded at Record Plant in Sausalito, California between October and December 1977 and went on to sell 150,000 copies in the US. Patrice Rushen plays the keyboards on Baby, more famous for her 1982 hit single Forget Me Nots. For You peaked in Billboard’s charts at 163 and although is subsequent albums improved, Prince would not find true chart success until his fifth album 1999. Warner Brothers felt Prince and his band were not ready to tour this album, his first tour, therefore, began with his second album.