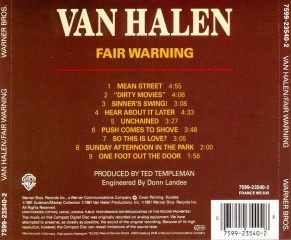 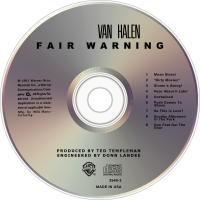 Fair Warning is the fourth studio album by American hard rock band Van Halen. Released in 1981, it sold more than two million copies, but was still the band's slowest-selling album of the David Lee Roth era. Despite the album's commercially disappointing sales, Fair Warning was met with mostly positive reviews from critics.

The cover artwork features a detail from "The Maze", a painting by the Canadian artist William Kurelek which depicts his tortured youth. The album was listed by Esquire as one of the 75 Albums Every Man Should Own.

Fair Warning was one of the first albums to reflect the rift in the Van Halen power structure; David Lee Roth wished to emphasize the pop influence that emerged on the previous two albums (which brought the band increased attention and a wider appeal), while Eddie Van Halen preferred to explore darker, longer and generally more complex song-structures that emphasized his innovative guitar work. Eddie clearly prevailed, as the album in fact featured longer, darker, more aggressive guitar-oriented material. Unchained can be heard frequently on rock radio stations.

The album's cover artwork is accompanied by an insert of a black-and-white picture of the band, as well as a view of a ghetto drywall. This drywall has a wire running across it, cracked windows at the top and a Roth-era Van Halen logo with plaster cracked over the left wing. Also on the wall is a lyric from the album's opening song, "Mean Street".