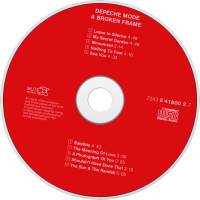 A Broken Frame is the second studio album by the British electronic band Depeche Mode, released in 1982. The album was written entirely by Martin Gore and recorded after the departure of Vince Clarke, who had left the band to form Yazoo with singer Alison Moyet. Alan Wilder was part of a second tour in the United Kingdom occurring prior to the release of this album, but he had not officially joined the band, and thus, does not appear on the album.
In the documentary that appears on the DVD that came with the 2006 reissue, Gore describes the record as "our worst album". None of the singles had long-term success compared to most of Depeche Mode's other albums' singles. A Broken Frame was the only album not represented on 101 and Remixes 81 - 04. Prior to 2006, the last song from the album to be performed live was "Leave In Silence" in 1986. "Leave in Silence" finally made its return (as an acoustic rendition) in a 2006 concert in Paris.
The song "Monument" was covered by GusGus for the Depeche Mode tribute album For the Masses.
A special limited edition live album based on A Broken Frame recorded at the Hammersmith Odeon on 25 October 1982 was also released early in 1983 which also included a special 12" version of Get The Balance Right on the B-Side. These editions were limited and had a edition number.