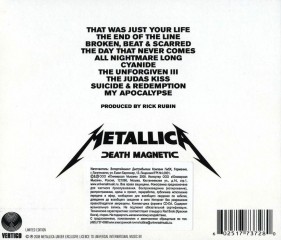 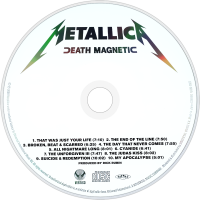 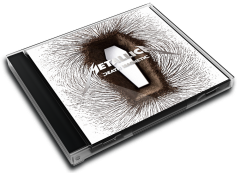 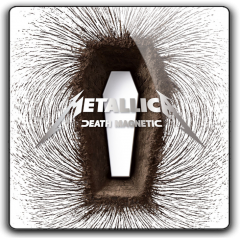 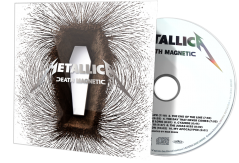 Death Magnetic is the ninth studio album by American heavy metal band Metallica, released on September 12, 2008 through Warner Bros. Records. It was the band's first album to be produced by Rick Rubin, making this Metallica's first album since 1988's ...And Justice for All that was not produced by Bob Rock. The album received mostly positive reviews upon release, with critics describing it as a return to the musical style of their early albums.
Musically, the album is a radical departure from Metallica's previous album, St. Anger, which featured no guitar solos and a more modern sound. Death Magnetic, on the other hand, features very long, technical guitar solos from both Kirk Hammett and James Hetfield, marking a return to the band's thrash metal roots. The album was also the band's first album released through Warner Bros. Records, although they still remain with Warner Music Group, which also owns their previous label, Elektra Records. Outside of North America, they are distributed through Universal Music Group as they remain signed to Vertigo Records in the UK. The album is also the band's fifth consecutive studio album to debut at number 1 on the Billboard 200 in the U.S., making Metallica the first band ever to do so.

User Album Review
It begins with a heartbeat...it could very well be the heartbeat of your average Metallica fan, scared to death, not by the spooky coffin made of iron filings on the cover (see what they did there?) but by the thought that this supposed 'return to form' by the world's once-greatest thrash metal merchants will be lame. Well worry not. After the solo-free St Anger way back in 2003 this is, well, most outstanding.

Never let it be said that Metallica aren't a band of the people, just not the people who file share their back catalogue. You can imagine Death Magnetic blasting out of some tank's soundsystem in the middle east. The closest thing to a ballad is single, The Day That Never Comes, though after a few minutes it descends back into the abyss of raw power. And the only low point comes with the penultimate instrumental, Suicide And Redemption which meanders and has a 'sensitive' solo line at its core that's at odds with the brutality on offer elsewhere.

James Hetfield's lyrics now seem to have become the channel of his post-therapy angst. More cyphers than actual narratives, they come direct from the big book of heavy metal words. Take this example from The End Of The Line, "Need..more and more/Tainted misery/Bleed...battlescars/Chemical affinity/Reign...legacy/Innocence corrode/Stain...rot away/Catatonic overload/Choke...asphyxia/Snuff reality/Scorch...kill the light/Incinerate celebrity/Reaper... butchery/Karma amputee". You get the idea.

But words aren't the major force at work here. It's the irresistible maelstrom of guitars. Kirk Hammett's back to shredding triplets or chiming with Hetfield in Thin Lizzy-esque duels. Balancing vertiginous prog time shifts with chugging power chords, it's amazing how raw and hungry producer Rick Rubin (himself, a thrash connoiseur with Slayer and Wolfsbane albums under his belt) has made the band sound. His greatest contribution is in bringing out the crunch in 'new' boy. Robert Trujillo's bass. On Cyanide he's unstoppable. And, of course, leading the changes is the mighty Lars Ulrich. Possibly the single most erudite expression of metal's paradoxical mix of intelligence matched with dumb, awesome power.

If there's a nagging sensation that the drums sound weird, it's because they're REAL. Say what you will about their psychodramas or political leanings, but this is a band that really can play.
Death Magnetic is the sound of a band giving both themselves and their fans exactly what they need. And nothing else matters...