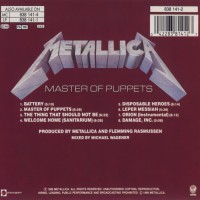 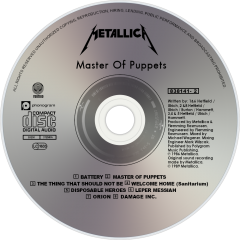 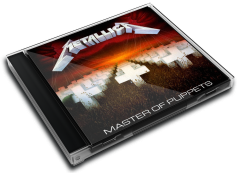 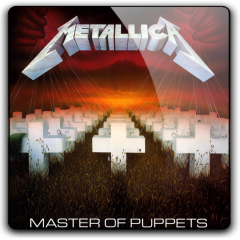 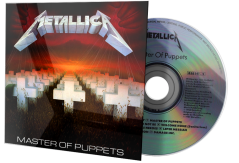 Master of Puppets is the third studio album by the American thrash metal band Metallica. It was released on March 3, 1986, through Vertigo Records, Music for Nations and Elektra Records, making it the group's major label debut. The album peaked at number 29 on the Billboard 200 chart[2 and was the group's first record to be certified gold for sales of over 500,000 copies. This was done without any radio airplay or the release of a music video. The album was certified six times platinum by the RIAA. Master of Puppets received positive reviews. Master of Puppets marks the last Metallica album with bassist Cliff Burton, who died in a bus accident while touring to promote the album.

User Album Review
Master Of Puppets, was their third album, released after their move to major label Elektra Records in 1986, in spite of not containing any singles it was the breakthrough to US rock radio airplay that they'd been looking for.

It’s hard, fast, rock with substance that doesn’t require the listener to wear eye-liner or big fire-hazard hair to enjoy. It also features more serious themes (albeit expressed in a particularly aggressive and direct way) and more complex arrangements than similar acts of the same era. And, praise the Lord, they’re not singing about hotels, or lost summers, or convertibles, or goblins or lipstick and eye-liner and especially, absolutely, definitely not GIRLS.

The lazy, “thrash” the tag doesn’t do the album justice. This is probably among the slowest thrash you'll ever hear, what it is is a very heavy, joyously aggressive record, packed with melody, that feels genuinely inclusive, and is superbly written and performed. Hetfield’s a master of establishing; maintaining and manipulating musical tension and mood, creating songs that really suck you in. This is hard rock as high drama (without the opera).

At this stage in their careers Metallica weren't even doing songs (unless they were covers). They were telling stories; every song is an event, parables of almost biblical proportions that you ignore at your peril. They also happen to rock really hard. Manipulation, deadly sea-monsters, mental breakdown, teenage conscription and subsequent transformation into cannon fodder, corrupt authority, scientology and, err, being a puppet (well there has to be some light relief) – all fine subjects for this band.
After listening to "The Thing That Should Not Be" you'll be sure that you’ve just survived a shark attack and convinced you smell a bit salty. “Welcome Home (Sanitarium)” will make you question your sanity, “Disposable Heroes” will convince you to quit the army (even if you're not a member)...that's the power of the stories on this album.

Roll up and enjoy Metallica, before they became slightly introverted and then went soft altogether.