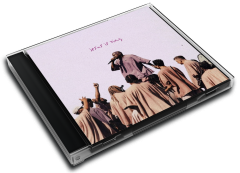 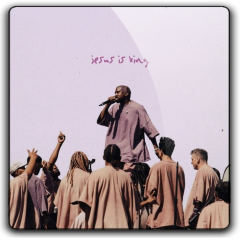 Jesus Is King is the ninth studio album by American rapper Kanye West, released on October 25, 2019, through GOOD Music and Def Jam. The album follows a Christian theme, with West describing it as "an expression of the gospel." West had formed his Sunday Service group in January 2019, performing gospel songs and covers of songs from his discography. Sunday Service performed the songs "Water" and "Everything We Need" live prior to release. The album features guest appearances from Clipse, Ty Dolla Sign, Kenny G, Fred Hammond, Ant Clemons, and Sunday Service. The album features production from West, Benny Blanco, E*vax, Finatik N Zac, Francis Starlite, Labrinth, Mike Dean, Pi'erre Bourne, Ronny J, Timbaland, and Warryn Campbell, among others.

West began recording in August 2018, originally announcing the album as Yandhi. The album missed two initial release dates in September and November 2018 under its original title, before being delayed indefinitely. In August 2019, West's wife Kim Kardashian reannounced the album as Jesus Is King but it missed two planned release dates for late September 2019. The album's release was simultaneous with that of a concert film of the same name. Upon release, Jesus Is King received mixed reviews from music critics. Some noted the consistency throughout and praised it in comparison to West's previous solo album, while other critics expressed negative feelings towards the lyrical content.

Jesus Is King debuted at number one on the US Billboard 200 and became the first ever to take all top ten spots on both the "Hot Christian Songs" and "Hot Gospel Songs" charts. The album broke another record by simultaneously topping five separate charts in the United States: the Billboard 200, Top R&B/Hip-Hop Albums, Top Rap Albums, Top Christian Albums and Top Gospel Albums.

Album Review
Kanye West has found God, and it turns out it is not himself. A producer-rapper who can be as divisively arrogant as he is dazzlingly brilliant, West has confounded expectations once again with a set of dramatic, evangelical hip hop testimonials.

Packed with gospel choirs, church organs and soulful ululations condensed into a typically bravura tableaux of obscure samples, warped synths and spooky slabs of vocoder harmonies, Jesus Is King sounds as scintillating as anything in West’s considerable canon. Frankly, the full-on scripture-quoting love-the-lord lyrics may not quite be what you expect from a man who once proclaimed I Am A God on an album irreverently titled Yeezus. Nevertheless, here we find the world’s most controversial rapper contritely proclaiming that he "Told the devil that I’m going on strike" whilst effusively dedicating himself to the Christian church.

On the subdued, confessional Hands On, West offers up such admissions as “Nothing worse than a hypocrite” and “I deserve all the criticism you got” against a gripping musical wash of strange sounds and muttered voices, evoking tension about the reception for his transformation. “To sing of change, you think I’m joking / To praise his name, you ask what I’m smoking” he croons in unison with the tender soul vocals of Fred Hammond. “I understand your reluctancy / But I have a request you see / Don’t throw me up, lay your hands on me/ Please, pray for me,” West pleads. It would be a hard heart that would remain unmoved.

West’s conversion does not arrive out of the blue. His 2004 single Jesus Walks (from debut album The College Dropout) was one of the songs that announced his genius, with children’s choirs and classical elements colliding with a lyric brilliantly illuminating the tensions between secular temptation and spiritual exaltation. A rapper of rare musical depths, West has been one of the key pop figures of our times, consistently introducing new sonic ideas and unexpected stylistic juxtapositions allied to witty, provocative wordplay on a wide range of subject matters. Unfortunately, he has found it impossible to keep his instinct for provocation inside the recording studio.

Although undoubtedly fuelled by mental health issues, his tendency towards absurd pronouncements and unapologetically egomaniacal persona have made him one of pop’s most exasperating characters. As recently as last week, he proclaimed himself “undoubtedly the greatest human artist of all time,” which suggests West’s new found humility only goes so far (though I wonder if his odd use of the phrase “human artist” was intended to leave room for a more divine artistry beyond his own?). West alienated his core black American fan base last year when he described slavery as a lifestyle choice then turned up at the White House to endorse President Trump. Yet rapping over wild synth arpeggios on new track On God, West proclaims allegiance to a different higher power, “the new commander and the chief”, with his mission to “love thy neighbour, not divide.”

I suspect divisions will remain. Jesus Is King is dazzling but too narrowly focussed to be of much interest to anyone sceptical of either West’s appeal or evangelical Christianity itself. As a pivotal pop cultural figure, there hasn’t been a shift like this since Bob Dylan’s 1979 born again album Slow Train Coming inspired angry denouncements from lifelong fans and presaged a decade in which Dylan struggled to recover artistic focus and momentum. Like Dylan at his most preachy, West has effectively restricted much of his lyrical scope by honing in so intently on scripture, and treading so carefully around anything that might offend fellow believers.

Jesus Is King is short (only 27 minutes long), punchy and breathtaking at times, reaching for qualities of transcendent beauty inherent in Gospel music whilst gaining a thrilling edginess from West’s production. Stand out track Use This Gospel evokes a beautifully strung out atmosphere, utilising breathy vocal synths and an unexpected sample from Northern Irish indie rock band Two Door Cinema Club. There are clever, supportive verses from veteran hip hop duo Clipse before everything falls away for a lilting saxophone solo from Eighties easy-listening legend Kenny G. Yet the most surprising thing may be hearing a man who once rapped that he’d "rather be a d--k than a swallower" proclaiming “Jesus Is Lord” over and over again.

The narrow didacticism of evangelical Christianity does not lend itself well to the interrogatory, argumentative nature of rap, a genre whose greatest proponents often sound like they are debating with their own inner voices. The worshipful tone strips away most of West’s humour, with little space for the kind of lateral connections and outrageous images that can shock listeners to attention. The blend of pious proclamations, heavenly choirs and edgy beats have more than whiff of a hip pastor trying to get down with the kids. This short album may work on its own terms but there is a question of whether it will represent an equally short phase of West career. I am not sure the world will find Kanye West’s piety as interesting as his former pompousness.