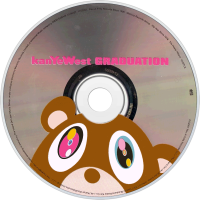 Graduation is the third studio album by American hip hop artist Kanye West, released September 11, 2007 on Roc-A-Fella Records. Recording sessions for the album took place during 2005 to 2007 at Chung King Studios and Sony Music Studios in New York City and at Chalice Studios and The Record Plant in Los Angeles. It was primarily produced by West and DJ Toomp, and features guest contributions from artists including Mos Def, Dwele, T-Pain, Lil Wayne, and Chris Martin of Coldplay. The album's cover artwork was designed by Japanese artist Takashi Murakami.
Inspired by Irish rock band U2 and other musical groups to make more inspirational, anthemic hip hop music, West incorporated synthesizer sounds into his production and dabbled with electronic music, while sampling a wider spectrum of musical genres. Lyrically, Graduation is more introspective in comparison to its predecessors, as West dedicated much of the album towards analyzing himself and conveying his ambivalent outlook on his newfound fame. It continues the education theme of West's previous two studio albums, The College Dropout (2004) and Late Registration (2005).
The album debuted at number one on the US Billboard 200 chart, selling 957,000 copies in its first week. The coinciding release dates of Graduation and rapper 50 Cent's Curtis generated much publicity over the idea of a sales competition, resulting in record-breaking sales performances by both albums. Graduation received generally positive reviews from most music critics and earned West several accolades, including a Grammy Award for Best Rap Album. The album has sold 2,166,000 copies in the US and has been certified double platinum by the Recording Industry Association of America.

Album Review
To many outsiders, Kanye West’s work may, on the surface still resemble the more generic bling and bragging of his contemporaries. Yet it’s undeniable that he’s introduced a distinctly more palatable sense of humour and self-effacement into an arena where those who shout the loudest get the spoils. But let’s not get too carried away. Graduation, his first studio album since 2005’s Late Registration, still name-checks the material rewards of being a modern R&B superstar as well as having a fair slice of sweary booty action.
But this is hip hop as pure pop. Kanye’s savvy enough (as he loves to remind us ad nauseum) to know that this music’s place in mainstream culture has changed. Hence the ‘new’ threads and the unrelenting self-promotion. It also demands an approach that‘s easier on the ear. It’s his skill as producer (see also his work with Common earlier this year) that really pushes him above the crowd. His judicious sampleology has just the right amount of guilty pleasures-style cheese to ironically make this sound as up-to-date as tonight’s episode of East Enders. From Elton John to Steely Dan, he knows his history even if his flow really isn’t as special as he probably thinks it is. Too often the sample rules the roost, as on the single "Stronger" where it’s really only Daft Punk’s gorgeous electronica that carries the song.
But that’s the contradiction with West. He knows he’s bragging, he knows that lyrically he’s still mirroring the dream life of young America, but on a song like “Drunk And Hot Girls” it’s always tempered with just enough irony and self-knowledge to make you grin. A little. But on the whole it’s the easy wins of tune-heavy songs like "Flashing Lights" that stick in the mind after the album’s over.
While Kanye West’s reconstructed, (slightly more) politically correct shtick may not be the seismic shift that many fans and critics would love it to be, he does represent a significant move in the right direction, and for this we must continue to be grateful. Just don’t tell him. His head’s big enough as it is”¦