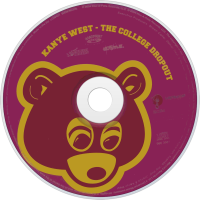 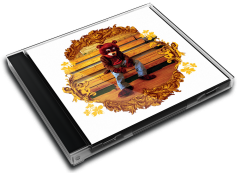 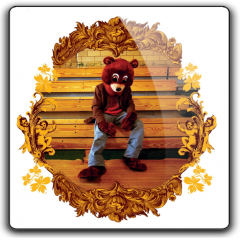 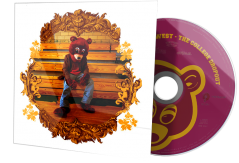 The College Dropout is the debut album by American hip hop artist Kanye West, released February 10, 2004, on Roc-A-Fella Records. It was recorded over a period of four years, beginning in 1999. Prior to the album's release, West had worked on rapper Jay-Z's The Blueprint (2001), which showcased his melodic and soulful style of hip hop production. Produced entirely by West, The College Dropout features musical contributions from Jay-Z, John Legend, Ervin "EP" Pope, Miri Ben-Ari, and Syleena Johnson. Diverging from the then-dominant gangster persona in hip hop, West's lyrics on the album concern themes of family, religion, self-consciousness, materialism, and personal struggles.
The album debuted at number two on the US Billboard 200 chart, selling 441,000 copies in its first week. It was a massive commercial success, producing five singles that achieved chart success. Upon its release, The College Dropout received general acclaim from music critics and earned West several accolades, including a Grammy Award for Best Rap Album at the 47th Grammy Awards. It is West's best-selling album in the United States, with domestic sales of over 3.1 million copies and worldwide sales of over four million copies. It has been named by Time and Rolling Stone as one of the greatest albums of all time.

Album Review
Hard to believe, but there was a time before Kanye West ”“ an age where we had to make do without this unshakably confident MC/producer, with his grand media pronouncements, goofy Twitter philosophy, and reliably excellent hip hop records. That Kanye today is perhaps hip hop’s most high-profile face is a lot to do with 2004’s The College Dropout.
At the time of its release, Kanye was probably best known as a producer, his pitched-up soul samples and gleaming synths gracing numerous records from Jay-Z’s Roc-A-Fella label (most notably, Hova’s own career high water mark, The Blueprint). Here, though, Kanye pulled off an audacious stunt that only one with his towering ego would dare attempt: to transform himself not just into a rapper, but a mainstream hit-maker, with a career plan ”“ from dropout to graduate, and beyond ”“ sketched out in front of him.
That he pulls it off is a lot to do with his peculiar proximity to mainstream hip hop culture. Sure, the opening We Don’t Care boasts a chorus that nods to the hard-knock ghetto narrative ”“ “Drug-dealing just to get by / Stacking money ‘til it gets sky high” ”“ but it does it with bright horns and a sunny, sing-song hook. As a couple of School Spirit skits make crystal-clear, Kanye is no thug: he’s preppy, God-fearing, a lover not a fighter, and his ingenious rhymes and easy charm come like a breath of fresh air.
So, Jesus Walks and Through the Wire balance laid-back beats with frightening confidence; the latter finds Kanye relating the aftermath of a near-fatal car crash over a helium-treated Chaka Khan hook, as if convinced of his own invincibility. Slow Jamz, with Twista and Jamie Foxx, pays tribute to the boudoir-friendly tunes of Marvin Gaye and Luther Vandross. And while West himself shows little sign of flagging, guest spots from the likes of Jay-Z, Ludacris, Common and Mos Def ensure it’s a treat from start to close.