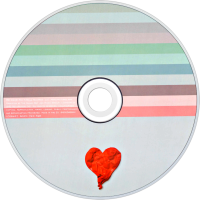 808s & Heartbreak is the fourth studio album by American recording artist and producer Kanye West, released November 24, 2008 on Roc-A-Fella Records in the United States. Recording sessions for the album took place at Glenwood Studios in Burbank, California and Avex Recording Studio in Honolulu, Hawaii during September to October 2008. It was produced primarily by West, No I.D., and Jeff Bhasker. Conceived in the wake of multiple events that distressed him in the previous year, the album marked a major musical departure for West from his previous work, lyrically, vocally, and production-wise.
Classified by West as a pop album, 808s & Heartbreak incorporates elements of synthpop, electronica, R&B, and electropop, while its tracks are primarily sung rather than rapped by West and contain lyrical themes such as love, loneliness, and heartache. The album also contains extensive use of the Auto-Tune voice processor and the Roland TR-808 drum machine, which was utilized and manipulated by West to produce a distorted, electronic sound. Approaching the album's production in a minimalist fashion, West intended to contravene the typical sound of hip hop beat and instead evoke a presence of tribal drums.
The album debuted at number one on the U.S. Billboard 200 chart, selling 450,145 copies in its first week. It produced four singles, including the hit singles "Love Lockdown" and "Heartless". Despite a divided reaction from music audiences towards West's stylistic change, 808s & Heartbreak received generally positive reviews from music critics upon its release. It impacted hip hop music stylistically, as a new wave of rappers adopted the album's aesthetic. 808s & Heartbreak has been certified platinum by the Recording Industry Association of America and has sold 1.63 million copies in the United States.

Album Review
When is a rapper not a rapper? When he's Kanye West! It's been a busy year for Mr West touring his Glow In The Dark show as well as producing a host of talent. Recorded in Hawaii, 808s & Heartbreak was originally pencilled in as having the wonderful title of A Good A** Job. Thankfully it's emerged as something that does exactly what it says on the tin. Insisting on a minimalism, with the titular drum machine providing the motorised beats, a wash of synth strings and some other keys and a voice that SINGS (not raps) through an autotuner, West completed this album in record time. The man obviously had something to get off his chest in a hurry. Yes, in years to come this album will be known as 'that one with the drum machine and all the songs about his ex'.
It's an ingenious turn of events. Listen to the mechanical grind of Robo Cop or single Love Lockdown where he may be toughing it out, but the solitary voice does have a deeply bleak effect on the senses. It's polished, perfect, mechanical; like the soul's been ripped out and replaced with something utterly efficient but devoid of hope.
The autotune IS liable to drag over the entire album. After about five tracks it can be a little like being locked in a padded cell with Sparky's magic piano, but it certainly gets across the sad little robot feel which marks this album as personal. West himself claims this to be the birth of a new genre: 'Pop Art' (someone may want to tell him about Andy Warhol, but never mind...). Bless his modesty, it's not as radical as that. But what WILL be interesting is how this album divides his fans.
He hasn't entirely denied his heritage - there's a duet with Lil' Wayne (See You In My Nightmare), but overall what is apparent is that Kanye has a gift for melody that extends his forte beyond mere bragging and busting rhymes. With another album already in the pipeline for next year one suspects that this may be a sideline that proves to be more cathartic for him than the rest of us. But it's kind of reassuring to see that an ego so huge is as susceptible to heartache as the rest of us mere mortals. And somehow this makes 808s & Heartbreak even more affecting. It certainly won't do his reputation as one of the top figures in popular music today any harm.