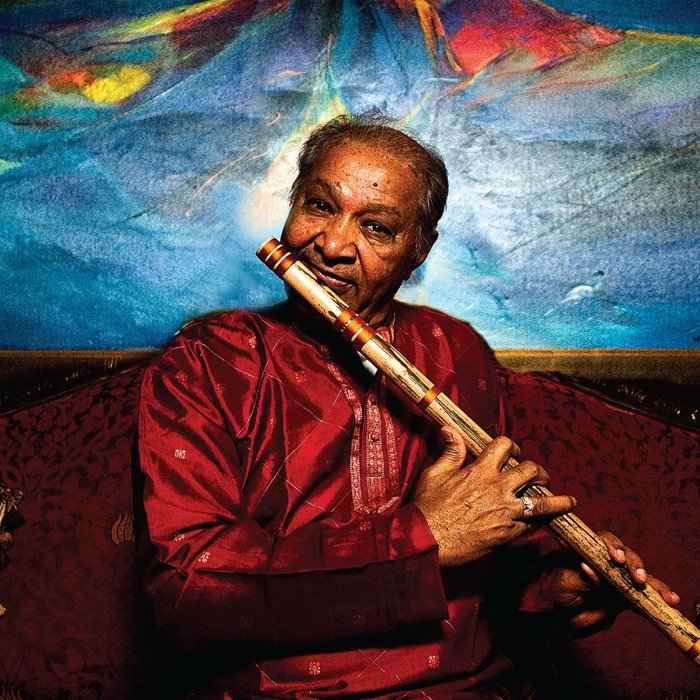 Hari-Krishna: In Praise Of Janmashtami (1999)

Flying Beyond: Improvisations on Bamboo (1995)

Hariprasad Chaurasia (born 1 July 1938) is an Indian music director and classical flautist, who plays the bansuri, an Indian bamboo flute, in the Hindustani classical tradition.
Chaurasia was born in Allahabad in the Indian state of Uttar Pradesh. His mother died when he was 6. He had to learn music without his father's knowledge, as his father wanted him to become a wrestler. He did go to the Akhada and trained with his father for some time, although he also started learning music and practising at his friend's house.
Chaurasia started learning vocal music from his neighbour, Rajaram, at the age of 15. Later, he switched to playing the flute under the tutelage of Bholanath Prasanna of Varanasi for eight years. He joined the All India Radio, Cuttack, Odisha in 1957 and worked as a composer and performer. Much later, while working for All India Radio, he received guidance from the reclusive Annapurna Devi, daughter of Baba Allaudin Khan. She only agreed to teach him if he was willing to unlearn all that he had learnt until then. Another version is that she only agreed to teach him after he took the decision to switch from right-handed to left-handed playing to show her his commitment. In any case Chaurasia plays left-handed to this day.
Apart from classical music, Hariprasad has collaborated with Shivkumar Sharma, forming a group called Shiv-Hari. The pair composed music for many popular movies, including Silsila and Chandni, and created some highly popular songs. Pandit Chaurasia also collaborated with Odia musician Bhubaneswar Mishra, forming the pair "Bhuban-Hari" (in line with Shiv-Hari), and the pair composed music for many Odia movies, creating numerous songs that were hugely popular in the state. These include Muje janena kaha baata (sung by Suman Kalyanpur; movie: Gapa helebi Sata); and all songs from Maa o Mamata, and many more.
Pandit Chaurasia's nephew and pupil Rakesh Chaurasia is a highly accomplished flautist now, and has been performing globally with such eminent maestros as Ustad Zakir Hussain.
He serves as the artistic director of the World Music Department at the Rotterdam Music Conservatory in the Netherlands. He was also the founder of the Vrindavan Gurukul in Mumbai (opened 2006) and Vrindavan Gurukul in Bhubaneshwar (opened 2010). Both of these institutes are schools dedicated to training students in bansuri in the Guru-shishya tradition.
He has collaborated with several western musicians, including John McLaughlin, Jan Garbarek, and Ken Lauber, and has composed music for Indian films. Chaurasia also played on The Beatles' 1968 B-side "The Inner Light", which was written by George Harrison. He also played with George Harrison on the Beatle’s first solo release, Wonderwall, and with Harrison, Ravi Shankar and others on the Dark Horse Records release Shankar Family & Friends. 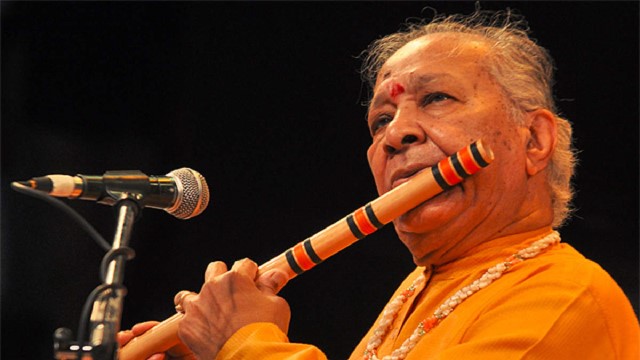