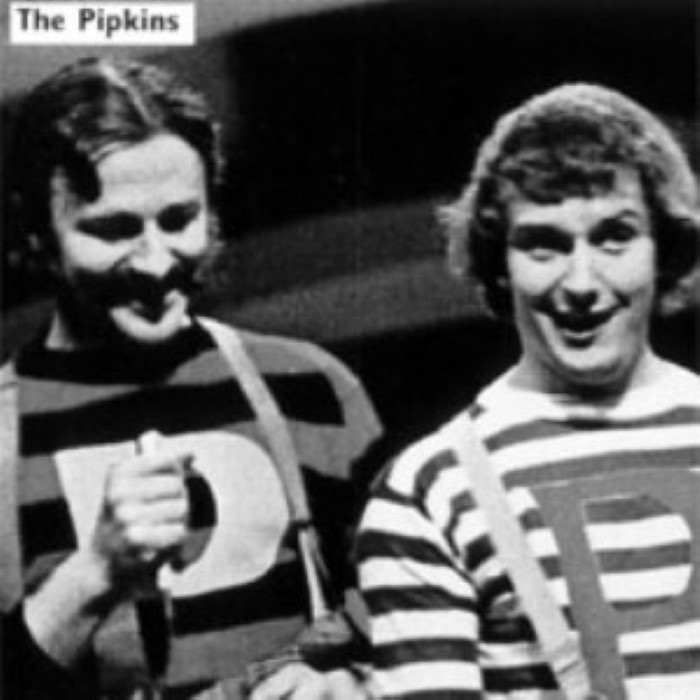 The Pipkins were a short-lived British novelty duo, best known for their hit single "Gimme Dat Ding" (written by Albert Hammond and Mike Hazlewood), which reached No. 6 in the UK Singles Charts, No. 7 in Canada (RPM Top Singles), and No. 9 on the US Billboard Hot 100 chart in 1970. They were Roger Greenaway, best known as a member of several songwriting teams, and Tony Burrows, a singer who had fronted several groups (often simultaneously) such as Edison Lighthouse, The Flower Pot Men, White Plains, The First Class and Brotherhood of Man.
The Pipkins also released two follow-ups as singles, "Yakety Yak" and "Are You Cooking, Goose?", but without success. "My Baby Loves Lovin'" had been a hit for White Plains, whilst "Sunny Honey Girl" was a Top 20 hit for Cliff Richard in 1971 on the UK Singles Chart.
According to the CD booklet for The Sweet And The Pipkins, "Gimme Dat Ding" is considered "the first rap record".
In the US, The Pipkins released their own album in 1970. Called Gimme Dat Ding, it was on Capitol ST-483 and peaked at No. 132 on the Billboard 200. It was a concept album in that the first song on it introduced the Pipkins, and the last song on it has them falling through the "little hole" on the album.