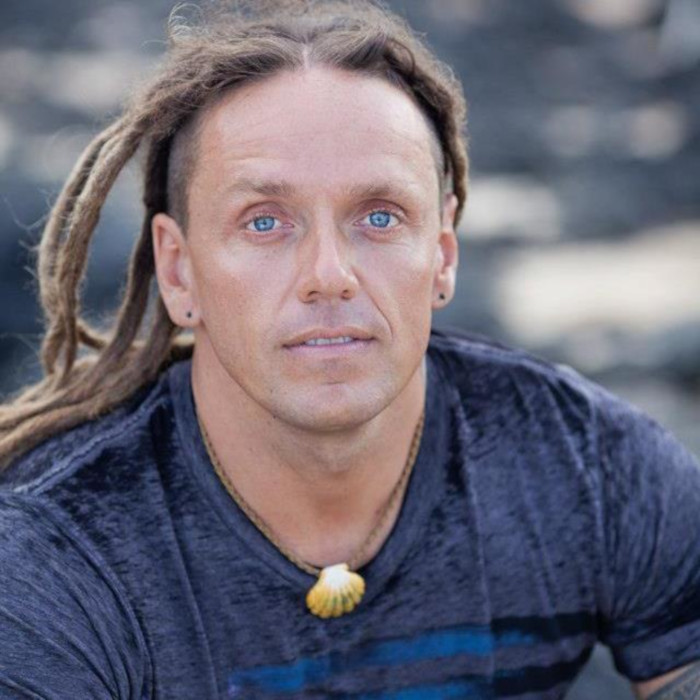 From 1994 through 1997, the young man later to call himself O-shen, was in the Washington State Prison at Walla Walla serving time for a burglary. It was there that he taught himself Tahitian. He carries a PNG passport, and a U.S. one.

Until age 15,O-shen was raised in the village of Butaweng in northern Papua New Guinea by his American medical missionary parents. There, living among the Yabim people, he learned the language, customs and hard, gardening work that was expected of any young Yabim man. He knows how to plant, and when to harvest, sweet potatoes, taro and kava. He did not speak English as his daily language until moving back to the U.S. at age 15.

Music was always a presence in his life. From the age of 4, he says, "I was beating on boxes with the other village kids while we pretended we were rock stars." This pattern continued at his high school in Spokane, Washington, where he was a drummer in the school band.

After serving his time in Washington, he moved to Hawai‘i, where he found work as a beach boy in Waikiki and began developing his music. "I was tired of bubble gum reggae and the ‘ooh, baby I love you’ songs that everyone was doing," he says. One day, he looked up the address of the record company producing CDs for recording artist Fiji.

"I sent Fiji a demo tape and a four-page letter telling him what I was trying to do with my music. A few days later, he called me up." O-shen’s first break was doing a Niugini pidgin rap introduction to a cut on Fiji’s album, Gratitude. His own first album, O-shen’s Iron Youth, won the Hawaiian musicians’ coveted Hoku award in 2001. His music is hard to characterize, but he likes to call it "urban Island music." His lyrics are serious. "I like to hit issues in my lyrics. I want people in the Islands to be proud of their cultures and languages and lifestyles."

O-shen loves and worries about Papua New Guinea. "There’re too many guns and robberies there. The kids get Western-style educations, then they drift to the cities where there are no jobs for them and they feel useless."

O-shen has done concerts in Tahiti and Guam—as well as on the U.S. mainland and in Papua New Guinea, where he is virtually mobbed by fans whenever he arrives at the airport. A concert he did in Palau drew the largest gathering of humans ever on that island.