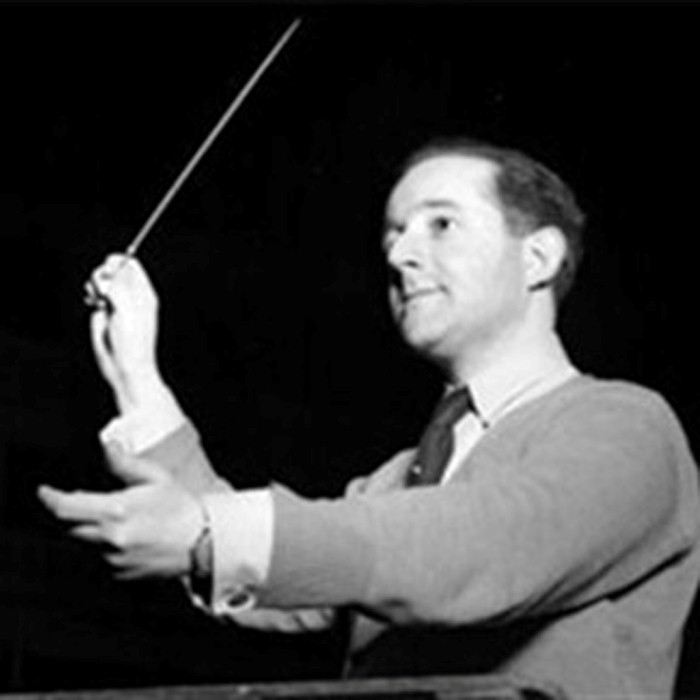 Anatole Fistoulari (20 August 1907 – 21 August 1995) was a Ukrainian conductor.
He was born in Kiev, Ukraine into a musical family. His father, Gregor Fistoulari, also a conductor, had studied with Rimsky-Korsakov and Anton Rubinstein. Anatole conducted for the first time at the age of seven, on the program Tchaikovsky's 6th Symphony, the Pathetique.
In 1931, he conducted several seasons in Paris for the Russian bass Fyodor Chaliapin. In 1933, he began his collaboration with Léonide Massine's Ballets Russes in Paris, touring in London and all over the United States in 1937.
In 1939 he joined the French army, and after the Fall of France escaped to England and found himself in London for the rest of World War II. In 1943, he was appointed principal conductor of the London Philharmonic Orchestra. During this period, he had a contract for 120 concerts, a great responsibility for the youthful conductor. His repertoire widened to include items like his father-in-law's Fourth Symphony in his busy concert schedule. In 1948, he became a British citizen. He conducted opera and concert schedules especially with either the London Philharmonic or London Symphony Orchestras. He conducted operas in New York and was a guest conductor in many countries. In 1956, he toured France and the USSR with the London Philharmonic Orchestra.
He made a number of studio recordings from the late 1940s through the mid-1960s. Fistoulari specialised in the interpretation of ballet music. He was also a noted conductor of Tchaikovsky and the Russian School, as well as romantic and impressionistic French music. In the 1950s his recordings were mostly for MGM, Decca, EMI, RCA and Mercury. Of special note, the Mercury performances of Sylvia by Léo Delibes and Giselle by Adolphe Adam. He recorded all three Tchaikovsky ballets, recording Swan Lake for Decca three times—once, in 1952, (slightly abridged) with the London Symphony—a second performance (of highlights), in stereo with the Concertgebouw Orchestra of Amsterdam in February 1961; and (uncut) in 1973, a Decca Phase 4 three disc set, featuring Ruggiero Ricci as violin soloist. Fistoulari made his last recordings with Decca Phase 4 in the early 1970s, including Tchaikovsky's 4th Symphony.
Besides his ballet recordings, Fistoulari conducted many well-known singers on record including Jan Peerce, Inge Borkh, Victoria de los Ángeles, and Boris Christoff, pianists like Edwin Fischer, Vladimir Ashkenazy, Clifford Curzon, Wilhelm Kempff, Earl Wild and Shura Cherkassky, as well as violinists such as Yehudi Menuhin and Nathan Milstein.