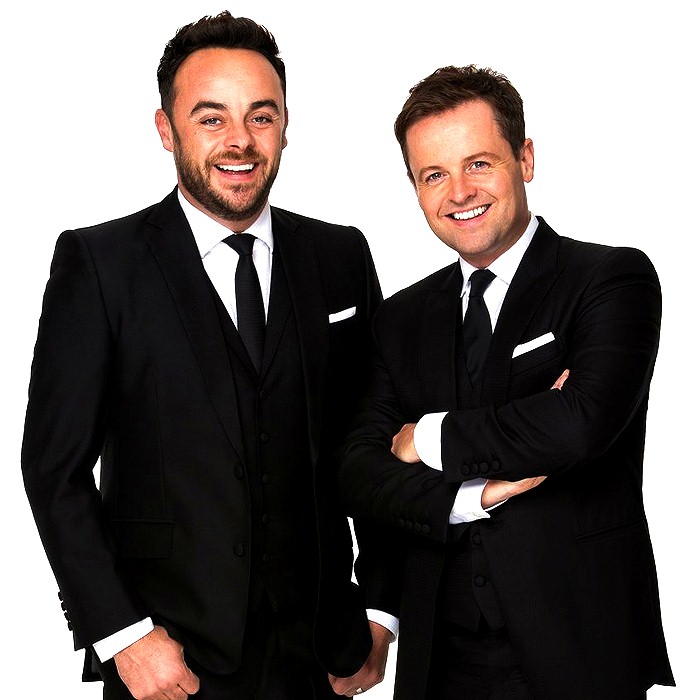 Ant & Dec are an English TV presenting duo, consisting of Anthony McPartlin OBE (born 18 November 1975) and Declan Donnelly OBE (born 25 September 1975), from Newcastle upon Tyne, England. Formed after their meeting as actors on CBBC's drama, Byker Grove, they performed together as pop musicians PJ & Duncan, the names of their characters from Byker Grove. The duo have since led successful careers as television presenters, best-known for currently hosting Ant & Dec's Saturday Night Takeaway, I'm a Celebrity...Get Me Out of Here!, and Britain's Got Talent. Previous hosting credits include SMTV Live, CD:UK, Friends Like These, Pop Idol, PokerFace, Push the Button, Red or Black?, and Text Santa. They presented the annual Brit Awards in 2001, 2015 and 2016.
In addition to presenting, the duo are actors and both had leading roles in the 2006 film Alien Autopsy. They have been television producers, and have their own production company, Mitre Television. When appearing together, they normally position themselves so that Ant is on the viewer's left, and Dec on the right.
In a 2004 poll for the BBC, Ant & Dec were named the eighteenth most influential people in British culture.
After leaving television, the duo turned their hand to pop music. Their first single was a song they performed while part of Byker Grove, entitled Tonight I'm Free. The single had some success, and the duo went on to record two albums under their character names of PJ & Duncan. Their most famous hit during this period was the BRIT Award nominated Let's Get Ready To Rhumble, for which the video and moves were choreographed by Mark Short, who had previously worked with Tina Turner and Peter Andre. For their third album, the duo reinvented themselves under their real names of Ant & Dec. The album featured their signature single "Shout".
During their time, the pair released sixteen singles and three studio albums; however, none of their releases managed to reach number one, with their highest UK chart position being number three. The duo did, however, reach the top ten in Germany and Japan, and even had a number-one single in Germany, with their cover of the Everly Brothers' All I Have to Do Is Dream. Success also struck in other European countries. The duo had a short lived revival in the music industry, releasing a song for the 2002 FIFA World Cup, entitled We're on the Ball. The track peaked at No. 3, being beaten by Will Young and Gareth Gates. On 23 March 2013 Ant and Dec performed Let's Get Ready To Rhumble as part of their show Ant and Dec's Saturday Night Takeaway which powered the song to number one on the UK iTunes chart and on Sunday 31 March 2013 the track was revealed as the Official UK Number 1 single on The Official Chart on BBC Radio 1. All money made from the re-release was donated to charity.