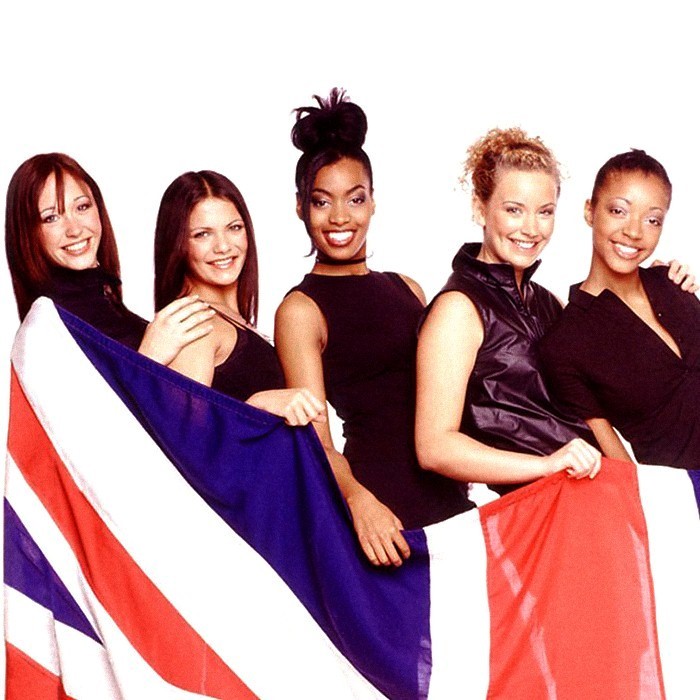 Precious were a British girl group, consisting of Louise Rose, Anya Lahiri, Sophie McDonnell, Kalli Clark-Sternberg and Jenny Frost. They first achieved fame as the UK's entry for the Eurovision Song Contest and went on to become a moderately popular act until the group disbanded in 2000.
Precious were established in late 1998 by friends Sophie McDonnell and Jenny Frost. A set of auditions saw the remaining members join: Anya Lahiri, Kalli Clark-Sternberg and Louise Rose. Rose took up lead vocals.
The following year saw things take off rapidly for the group. In May 1999, Precious were voted in to represent the UK at the Eurovision Song Contest. Their song "Say It Again" proved popular and the group were able to sign with EMI to release the song as a single on the 17 May. It debuted at No. 6 in the UK singles chart. In the Eurovision Song Contest, Precious did not carry off the grand prix with "Say It Again", sharing 12th position, but this was not to stop them from pursuing a pop career.
Precious went on to put together their debut album self-titled Precious. It featured a number of tracks, including "Say It Again", with songwriters and producers such as the Danish, Cutfather, and Joe and Chris Porter. The debut album was released 20 November 2000. As the group went public, promoting widely through 1999 and into 2000, the next single was due. On the 20 March 2000 they released their second single "Rewind", which reached No. 11 in the UK. Precious released their third single, "It's Gonna Be My Way", on 26 June 2000 and it reached No. 27. Their last single was "New Beginning", with a video clip set in an industrial warehouse showing the group acting like tough girls. The song failed to make an impact on the UK Singles Chart; it reached No. 50, becoming their only single not to reach the top 40. One of the songs from their debut album, "I Count the Minutes", was originally recorded by Puerto Rican artist Ricky Martin from his 1999 self-titled debut English album.
By the end of 2000, Precious as a group came under scrutiny. The group's success diminished after their debut album failed to chart, selling fewer than 600 copies. The group were dropped by their label and it was decided that the individual members should pursue separate careers. It would not be the last that the public would hear from members of the group, with McDonnell presenting for BBC TV and Radio including their CBBC brand; Frost replacing Kerry Katona in the group Atomic Kitten; and Lahiri returning to her modelling activities. Lahiri was one of the FHM Pit Girls in 2003, and she started a new career as an actress, performing with Jacqueline Bisset and Daniel Bernhardt. Lead singer Rose has also become an actress; her credits include the 2008 mini-series "Diamonds". Clark-Sternberg has since become a session singer.