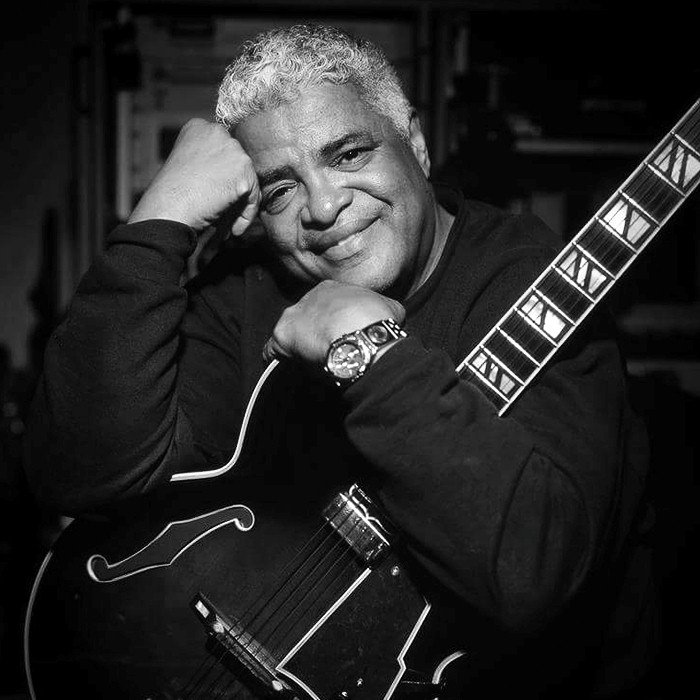 Philip Upchurch (born July 19, 1941, Chicago, Illinois) is an American blues, jazz and R&B guitarist and bassist.
Upchurch started his career working with the Kool Gents, the Dells, and the Spaniels before going on to work with Curtis Mayfield, Otis Rush, and Jimmy Reed. (His association with Kool Gents member Dee Clark would continue, including playing guitar on Clark's 1961 solo hit "Raindrops".) He then returned to Chicago to play and record with Woody Herman, Stan Getz, Groove Holmes, B.B. King, and Dizzy Gillespie.
In 1961, his record "You Can't Sit Down" by the Philip Upchurch Combo sold over one million copies and was awarded a gold disc. "You Can't Sit Down, Part 2" peaked at No. 29 on the Billboard charts in the US. And he released first album. In the 1960s he toured with Oscar Brown, appearing on the 1965 live album, Mr. Oscar Brown, Jr. Goes to Washington. In the mid-'60s he was house guitarist of Chess Records and he played with The Dells, Howlin' Wolf, Muddy Waters and Gene Chandler. He also played with John Lee Hooker, Grover Washington, Jr. and Cannonball Adderley. Upchurch was part of a group called the Soulful Strings during the 1960s, prior to working with Rotary Connection on Chess's Cadet label.
In the 1970s he worked with Donny Hathaway, Harvey Mason, Ramsey Lewis, Quincy Jones and led his own quartet with Tennyson Stephens. He met Bob Krasnow and Tommy LiPuma, the founders of Blue Thumb Records, and he released "Darkness Darkness". Upchurch played on Donny Hathaway's "This Christmas" and "The Ghetto". He also played guitar on Hathaway's "Live" album (1972). In the mid 1970s and 1980s, he performed with George Benson, Mose Allison, Gary Burton, Lenny Breau, Joe Williams, Chaka Kahn, Natalie Cole, Carmen McRae, Cat Stevens, David Sanborn, and Michael Jackson. In the 1990s he worked with Jimmy Smith and Jack McDuff.
His son is the drummer, Sean Rickman. His wife, his seventh, is the actress Sonya Maddox.