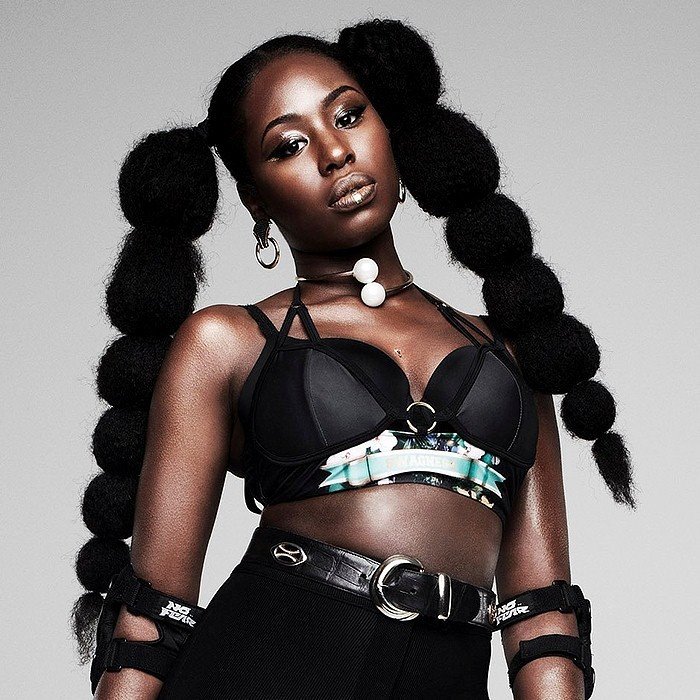 Diane Nadia Adu-Gyamfi (born 1991), better known by her stage name Moko, is a Ghanaian-British soul singer. She rose to fame after featuring on the Chase & Status single "Count on Me". Moko has released two EPs, Black (2013) and Gold (2014), on MTA and Virgin EMI.
Moko was born and raised in New Cross, London. Her mother is of Ghanaian descent and her grandmother is Chinese. She began singing in her local church choir as a child. She enrolled on a music scheme at Goldsmiths, University of London when she was 15 years old, and later returned to the university to study English literature, practising in the institution's music facilities in her spare time.
During her studies at Goldsmiths, Moko began recording music with two of her fellow students, a production duo called the Impostors. She debuted the song "Summon the Strength" online in February 2013, followed by "Hand on Heart" in May 2013. The same month, Moko performed with Rocket Number Nine and Neneh Cherry on the internet channel Boiler Room TV. She subsequently headlined the BBC Introducing stage at that year's Glastonbury Festival.
Dance producers Chase & Status featured Moko on two tracks on their album Brand New Machine (released in October 2013): "Count on Me" and "Like That". The former track was released as a single in September 2013 and peaked at number five on the UK Singles Chart. Moko signed to the duo's own label, MTA Records (part of Virgin EMI Records), and in October 2013 she released her debut EP, Black (produced in its entirety by the Impostors), and a video for its track "Freeze". During October and November 2013, she supported Chase & Status on their Brand New Machine UK arena tour.
In 2014, Moko collaborated with singer-producer MNEK on the track "Judgement Day", which is scheduled for release as a single from his upcoming debut album. Moko released her second EP, Gold, in August 2014, preceded by the single "Your Love". Gold features production from Chase & Status, Kwes, and Two Inch Punch. She was working on a full-length album by early 2015.