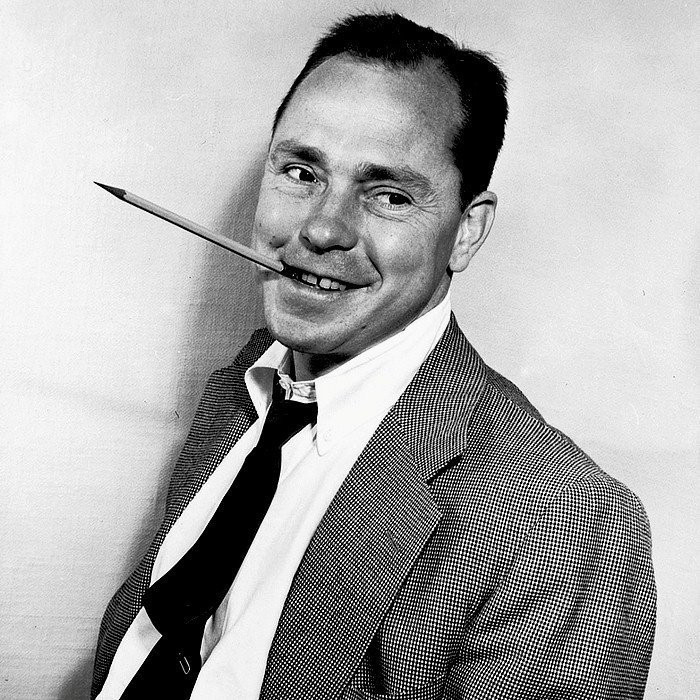 John Herndon Mercer (November 18, 1909 – June 25, 1976) was an American lyricist, songwriter, and singer. He was also a record label executive who co-founded Capitol Records with music industry businessman Buddy DeSylva and Glenn E. Wallichs.
He is best known as a Tin Pan Alley lyricist, but he also composed music. He was also a popular singer who recorded his own songs as well as songs written by others. From the mid-1930s through the mid-1950s, many of the songs Mercer wrote and performed were among the most popular hits of the time. He wrote the lyrics to more than 1,500 songs, including compositions for movies and Broadway shows. He received nineteen Academy Award nominations, and won four Best Original Song Oscars.
Mercer moved to New York in 1928, when he was 19. The music he loved, jazz and blues, was booming in Harlem and Broadway was bursting with musicals and revues from George Gershwin, Cole Porter, and Irving Berlin. Vaudeville, though beginning to fade, was still a strong musical presence. Mercer's first few jobs were as a bit actor (billed as John Mercer). Holed up in a Greenwich Village apartment with plenty of time on his hands and a beat-up piano to play, Mercer soon returned to singing and lyric writing. He secured a day job at a brokerage house and sang at night. Pooling his meager income with that of his roommates, Mercer managed to keep going, sometimes on little more than oatmeal. One night he dropped in on Eddie Cantor backstage to offer a comic song, but although Cantor didn't use the song, he began encouraging Mercer's career. Mercer's first lyric, for the song "Out of Breath (and Scared to Death of You)", composed by friend Everett Miller, appeared in a musical revue The Garrick Gaieties in 1930. Mercer met his future wife at the show, chorus girl Ginger Meehan. She had earlier been one of the many chorus girls pursued by the young crooner Bing Crosby. Through Miller's father, an executive at the prominent music publisher T. B. Harms, Mercer's first song was published. It was recorded by Joe Venuti and his New Yorkers.
The 20-year-old Mercer began to hang out with other songwriters and to learn the trade. He traveled to California to undertake a lyric writing assignment for the musical Paris in the Spring and met his idols Bing Crosby and Louis Armstrong. Mercer found the experience sobering and realized that he much preferred free-standing lyric writing to writing on demand for musicals. Upon his return, he got a job as staff lyricist for Miller Music for a $25-a-week draw which give him a base income and enough prospects to win over and marry Ginger in 1931. The new Mrs. Mercer quit the chorus line and became a seamstress, and to save money the newlyweds moved in with Ginger's mother in Brooklyn. Johnny did not inform his own parents of his marriage until after the fact, perhaps in part because he knew that Ginger being Jewish would not sit comfortably with some members of his family, and he worried they would try to talk him out of marrying her. In 1932, Mercer won a contest to sing with the Paul Whiteman orchestra, but it did not help his situation significantly. He made his recording debut, singing with Frank Trumbauer's Orchestra, on April 5 of that year. Mercer then apprenticed with Yip Harburg on the score for Americana, a Depression-flavored revue famous for "Brother, Can You Spare a Dime?" (not a Mercer composition), which gave Mercer invaluable training. After several songs which didn't catch fire, during his time with Whiteman, he wrote and sang "Pardon My Southern Accent". Mercer's fortunes improved dramatically with a chance pairing with Indiana-born Hoagy Carmichael, already famous for the standard "Stardust", who was intrigued by the "young, bouncy butterball of a man from Georgia." The two spent a year laboring over "Lazybones", which became a hit one week after its first radio broadcast, and each received a large royalty check of $1250. A regional song in pseudo-black dialect, it captured the mood of the times, especially in rural America. Mercer became a member of ASCAP and a recognized "brother" in the Tin Pan Alley fraternity, receiving congratulations from Irving Berlin, George Gershwin, and Cole Porter among others. Paul Whiteman lured Mercer back to his orchestra (to sing, write comic skits and compose songs), temporarily breaking up the working team with Carmichael.
During the golden age of sophisticated popular song of the late Twenties and early Thirties, songs were put into revues with minimal regard for plot integration. The 1930s saw a shift from revues to stage and movie musicals using song to further the plot. Demand diminished accordingly for the pure stand-alone songs that Mercer preferred. Thus, although he had established himself in the New York music world, when he was offered a job in Hollywood to compose songs and perform in low-budget musicals for RKO, he accepted and followed idol Bing Crosby west