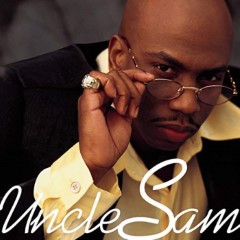 There is more than one band or artist called Uncle Sam:

1) Uncle Sam (Di Foreign Man), Nominated for Best Male Soca Artist, Released a Number one Remix hit in the UK, Worked with Byron Lee and the Dragonaires, Released 3 albums and working on finishing his 4th album, travels all over the world with his band performing, has people scratching their heads saying,” This white boy is wicked now who and where did he come from?”

Ryan” Uncle Sam” , born in Florida was immersed into the music scene as a young child and in the 80’s landed a reoccurring gig at a skating rink as a house DJ. Sam got a call from a Local Sound System looking for a Selector, which he took Djing alongside the likes of Renaissance, Bodyguard, Stone Love, Lees Unlimited, Black Chiney etc., until he went back to school finishing his BA at University Of Central Florida. Years Passed and the sound Business took a side step when Sam was at a show. The Dj Flipped over the record to the instrumental and passed him the microphone. When he began to sing a song the crowd went into a frenzy. Uncle Sam took it a step further and worked with a few local bands landing a residential job at Bob Marley’s at Universal at City Walk in Orlando. Sam put his own band together while taking the stage along side artists like Lady Saw, Macka Diamond, Rupee, Allison Hinds, T Vice, and the list goes on and on. One particular event was at the FIU Angostura Fete 2005 when Byron Lee and the Dragonaires spotted his performance with Leon Coldero. Uncle Sam Traveled with Byron Lee performing at Miami Jerk Fest 2005-2009, Batabano Cayman Islands Carnival, Dominica Creole Festival, Jamaica Carnival 2006-2007, Richmond Estates Carnival, and up and down the North East Coast hitting all Carnivals and Festivals from New York To Miami. In 2005 He released His first unofficial album “Dem Ting Deh” Which got rave reviews on his singing abilities. Uncle Sam worked Extensively in the UK market with the Biggest Producers and In 2007 Uncle Sam Put out the number one Dubstep Remix Hit,” Round The World Girls (Tes La Rok Remix)” which is the Foundation for all singing Dubstep songs and continued writing and releasing songs like, London City, and Up In the VIP on Dub Police Records UK. Uncle Sam was nominated for Best Male Vocalist in the International Soca Division and in 2008 Uncle Sam teamed up with De Red Boyz out of Barbados Writing and Releasing his Cropover hits, “We Love You Carnival” with Jamesy P and,” Wine in Di Place” With Allison Hinds. Sam teamed up with Adam “King Bubba” Elias in 2009 releasing Multiple Bangers for Barbados Cropover like, “Waist Line Round, Big Money, Mad Outta Road” and “Serves A Purpose” Which was a HUGE St.Vincent Hit playing all over every Carnival Commercial and Radio Airwave. 2010 Uncle Sam released two albums,” Di Foreign Man” and,” Uncle Sam Mixtape” which is available on his website or Itunes. Uncle Sam is an artist you will never forget, with his exceptional singing skills he incorporates Reggae, Soca, Dubstep, and Hip Hop influences making people scratch their head in thought,” This boy is wicked so where did he come from!”