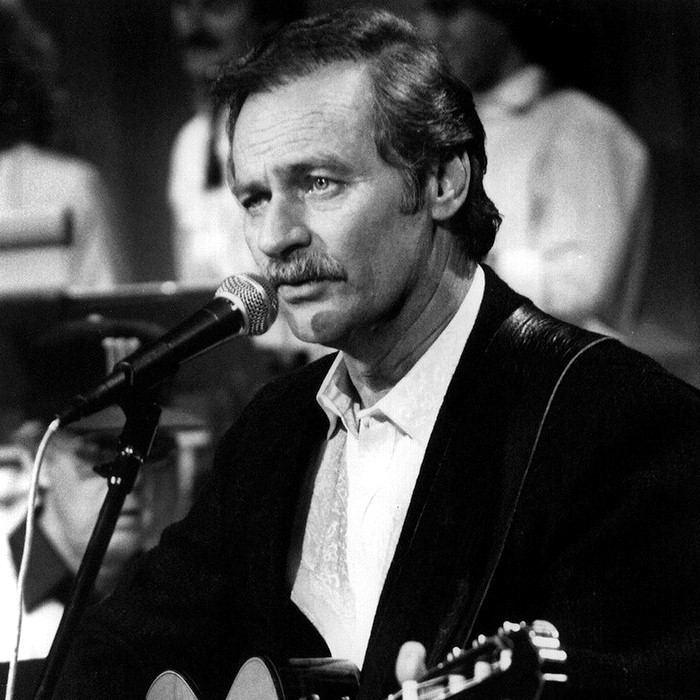 Vern Gosdin (August 5, 1934 – April 28, 2009) was a traditional country singer with a strong country voice. Some of his best material were not #1 hits.
As country music swung back toward traditional styles in the 1980s, an inheritor of the soulful honky tonk style of Lefty Frizzell and Merle Haggard rose to the top of the business and notched hit after barroom hit. Sometimes he was known simply as "the Voice." Born in Woodland, AL, Vern Gosdin idolized the Louvin Brothers and the Blue Sky Boys as a young man and sang in a gospel quartet called the Gosdin Brothers.

When he was in his late teens, his family moved to Birmingham and began hosting The Gosdin Family Gospel Show on a local radio station. Gosdin and his brother, Rex, moved to Long Beach, CA, in 1961.

They began performing bluegrass music in the milieu that gave birth to country-rock, joining a group called the Golden State Boys which evolved into The Blue Diamond Boys in 1962 when future Byrds member Chris Hillman joined them on the mandoline. Shorty after they would rename again to The Hillmen which disbanded in the summer of 1964, when Chris Hillman left to join the BYRDS. During this time the group recorded an album, which was released by Together Records in 1970 as "Don Parmley And The Five String Banjo". Vern and Rex teamed up to sing country music as the Gosdin Brothers once again, had a Top 40 country hit in 1967 with "Hangin' On," and opened for the Byrds on occasion.

Gosdin moved to Atlanta in 1972, raising a family and running a retail shop. But he never gave up on music completely. He performed at local clubs and began to gravitate toward Nashville, where Emmylou Harris, a friend of Gosdin's from his California days, was laying the foundation for a neo-traditionalist style of country music. Around 1976 Gosdin and Harris cut a demo single consisting of "Hangin' On" backed with a newly written song, "Yesterday's Gone." The demo got Gosdin signed to the Elektra label, and both songs cracked the country Top 20. In the late '70s he notched several major hits, including "Till the End" (with Janie Fricke), "Mother Country Music," and a remake of the Association's "Never My Love."

In 1980, after the demise of Elektra's country division, Gosdin quickly moved through several contracts and landed with the independent Nashville label Compleat. He made the Top Ten consistently in the early '80s, really hitting his stride when he teamed with Max D. Barnes as a songwriting collaborator. The pair specialized in songs of cheating and barroom romance, often delivering an over-the-top emotionalism that got Gosdin compared to the ultimate legend of honky tonk vocals, George Jones. In 1983, Gosdin had two Top Five hits — "If You're Gonna Do Me Wrong (Do It Right)" and "Way Down Deep." The following year he had his first number one single with "I Can Tell by the Way You Dance (You're Gonna Love Me Tonight)" and had two additional Top Ten hits. His career hit a lull in the mid-'80s, but in 1987, with the new traditionalist movement in full swing and Warner Bros. artist Randy Travis roosting at the top of the charts, he was tapped by the Columbia label. He bounced back into the Top Ten that year with the tortured "Do You Believe Me Now," and in 1988 he hit number one once again with the perennially popular Ernest Tubb tribute "Set 'Em Up Joe." Gosdin's "Chiseled in Stone," co-written with Barnes, won the Country Music Association's Song of the Year award in 1989. His 1989 album Alone was a rarity: a concept album in a traditional country style. It chronicled the dissolution of Gosdin's marriage. Vern's popularity is again on the rise as 2008 sees the release of his life's works on a 101 song Box Set titled 40 Years of The Voice. This living legend continues to represent pure traditional country.