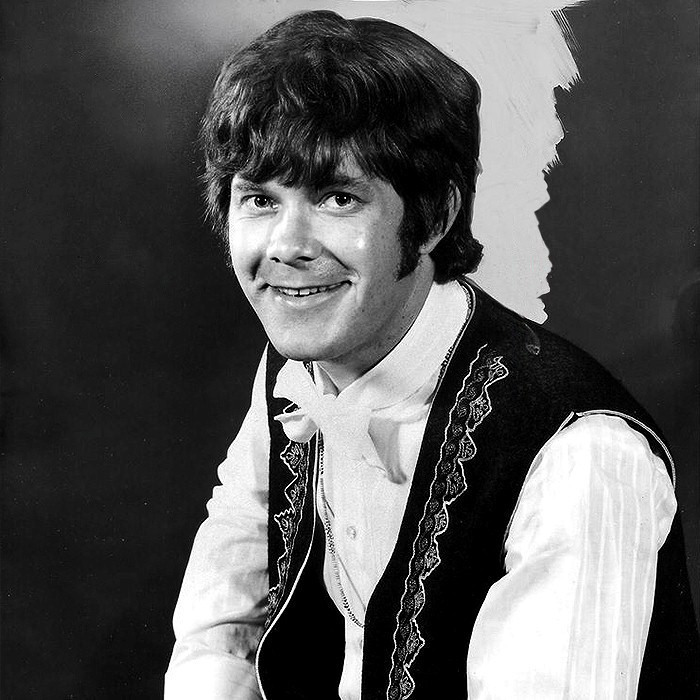 William Oliver Swofford (February 22, 1945 – February 12, 2000), known professionally as Oliver, was an American pop singer, best known for his 1969 song "Good Morning Starshine" from the musical Hair as well as "Jean" (the theme from the film The Prime of Miss Jean Brodie).
William Oliver Swofford was born on February 22, 1945, in North Wilkesboro, North Carolina, to Jack and Helen Swofford. He was a recipient of the prestigious Morehead Scholarship and attended the University of North Carolina at Chapel Hill starting in 1963 and began singing as an undergraduate. He was a member of two popular music groups — The Virginians and, later, The Good Earth — and was then known as Bill Swofford.
His clean-cut good looks and soaring tenor voice were the perfect vehicle for the uptempo single titled "Good Morning Starshine" from the pop/rock musical Hair, which reached No. 3 on the Billboard Hot 100 in July 1969, sold over one million copies, and was awarded a gold disc by the R.I.A.A. a month later. Later that fall, a softer, ballad single titled "Jean" (the theme from the Oscar-winning film The Prime of Miss Jean Brodie) bested his previous effort by one, reaching No. 2 on the Hot 100 and No. 1 on the Billboard Easy Listening chart. Written by poet Rod McKuen, "Jean" also sold over one million copies, garnering Oliver his second gold disc in as many months. Performing both hits on a number of television variety shows and specials in the late 1960s, including The Ed Sullivan Show, helped both songs.
Bill "Oliver" Swofford had more modest commercial success, however, with the cover of "Sunday Mornin'", which peaked at No. 35 in December 1969, and "Angelica", which stalled at No. 97 four months later. In addition, his cover of "I Can Remember", the 1968 James & Bobby Purify hit, missed the Hot 100 but climbed into the top 25 of the Billboard Easy Listening chart in the mid summer of 1970. Late that fall, Oliver also had one inspirational recording titled "Light the Way", composed by Eric Carmen. Oliver's last single to enter the pop music charts was his 1971 cover of "Early Morning Rain" by Canadian singer-songwriter Gordon Lightfoot. The song "Bubbled Under" at No. 124 on May 1, 1971 and also reached No. 38 on the Easy Listening chart a few weeks later.
Producer Bob Crewe also recorded with The Rays, Diane Renay, Mitch Ryder and the Detroit Wheels, Freddy Cannon, Lesley Gore, Michael Jackson, Bobby Darin, Roberta Flack, Peabo Bryson, Patti LaBelle, and Frankie Valli and The Four Seasons as well as his own The Bob Crewe Generation.
As Crewe preferred elaborately orchestrated musical arrangements and Oliver preferred a simpler folk sound, these "creative differences" led them to part ways in 1971. Resuming the name Bill "Oliver" Swofford, the singer toured hundreds of college campuses in the eastern and southern United States in 1976 and 1977. He was recorded on numerous albums of his friends including Steve Goodman and is credited with guitar, and vocals on several of Steve's albums. He and Goodman wrote one of the songs together (Jessie's Jig (Rob's Romp, Beth's Bounce)) which was released on the album Jessie's Jig and Other Favorites and dedicated it to their children. His natural talent and vocal range made him one who was called often for recording sessions.