Free from any museum nostalgia, the four musicians take their inspiration from the gigantic treasury of swinging jazz, from Bix to Bop, from Getz to Gershwin, while constantly searching for the hidden, the unexpected, the exquisite. The Great American Song book and the immeasurable recordings of great Jazz pioneers form the humus for the creativity of the combo, with astonishing arrangements, virtuoso solos and expressive compositions of their own.
Two horns, drums and piano. This unique, compact formation permits the greatest in harmony and flexibility and allows freedom for an agile, exact ensemble. The group thrives on a mixture of clever arrangements and interaction of improvised dialogue, performing for, and with one another.
The contemporary interpretation of an enormously varied repertoire and not last the humorous moderation and spontaneous stage presence, has helped gain ECHOES OF SWING great popularity and made the ensemble a much renowned and celebrated attraction on the international jazz scene.
Sixteen years of touring have led the ECHOES all across Europe and the USA, to Japan, New Zealand and even the Fiji Islands. The exceedingly diverse musical development of the band is in the meantime impressively documented on five CDs. The last ECHOES OF SWING album ‘Message from Mars’ received the ‘Prix de l’Académie du Jazz’ in Paris, and in Germany was awarded the ‘German Record Critics' Award’.
In 2013 ECHOES OF SWING signed a contract with 'ACT Music & Vision'. The eagerly anticipated album is now due for release. 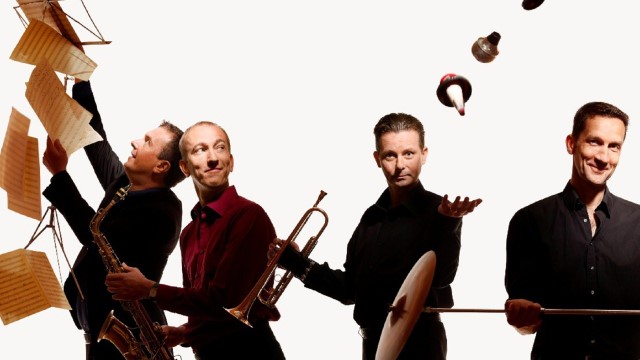