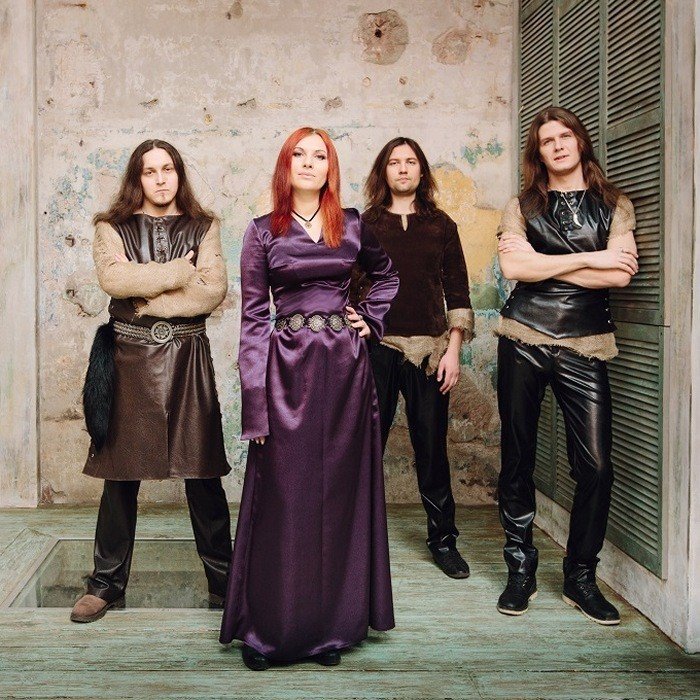 Kalevala (Калевала) is a folk metal band from Russia that formed in 2007 Kseniya - vocal, lyrics Nikita Andriyanov - guitar, music Aleksej Mitrofanov - bass Denis Zolotov - drums Ivan Andriyanov - session musician, balalayka on acoustic shows Discography : "Kudel' Belosnezhnogo L'na" ( 2008) - Sound Age Production "Kolokol'chik" (single 2009) "Cookushkiny Deti" (2009) - Metalism Records "Tausen-rada" (single 2010) "Vedma" ( 2010) - - Sound Age Production "Luna I grosh'' - 2013 "Dohu ja kupila" EP - 2014 "Volchij zov" single - 2014 "Kalevala" was established in spring 2007, after Ksenya?s leaving Russian group "Nevid". On the 15th of April,2007 after performance in Penza, it was clear, that Ksenya's and Lesyar's staying in "Nevid" was impossible, so there, in Penza, Ksenya had a talk about creation joint project with guitarist Nikita, as he had some folk music material which was insufficiently rigid for Nevid, but quite interesting. "Nevid" returned home without Ksenya, as she had left the city by train before. The time had passed and Ksenia had first lyrics for Nikita's music :"Darling", "River to river" and "Goy, Dear! "etc. at the same time they were searching for musicians for the band. Nikita invited his bosom-friend - accordionist Olen' (Deer) with whom he had been participated in the Russian folk orchestra at music school. Ksenya made an acquaintance with Bumblebee - a bass player and vocalist of "Rarog" and he willingly took an invitation to play with the unnamed for that time folk-metal band. The place at the drums was taken by Bumblebee's acquaintance - Mark, the drummer of the band "Krakatau", but it was only for one jam, on the 2nd his place took Vasiliy from trash-death band "Reborn in chaos". So the structure was finally approved and since July 2007 constant jams have started. The name of the band wasn't chosen accidentally. First of all Ksenya's Finnish nature. The 2nd thing is that All songs were written under the influence of Finnish folklore music and famous Finnish bands such as "Korpiklaani", "Finntroll", etc. though the influence of Russian national folklore is great too. And The third, Bumblebee had a T-shirt which bore an inscription "Kalevala", which gave no rest for all band's members. So, they decided to name The band "Kalevala", but naturally it spelled in Russian like «Калевала». So the group was ready to appear before the general public on the 27th of September, 2007 and demo of 2 songs were recorded. "Goy,dear" (music -Nikita/lyrics - Kseniya) - Goy, olen! "The cowboy" (music Nikita/lyrics A. Ahmatova) - Pastushok The Demo made a success on the internet and many affirmative replies. At the same time There wasn?t deserved substitute in Nevid, therefore Nikita decided to leave the band and concentrated on "Kalevala". On the 5th of October there was The first concert, and on the 5th of April the band released their Album "Tow of Snow-white Flax" in Russian Rock club "Relax"