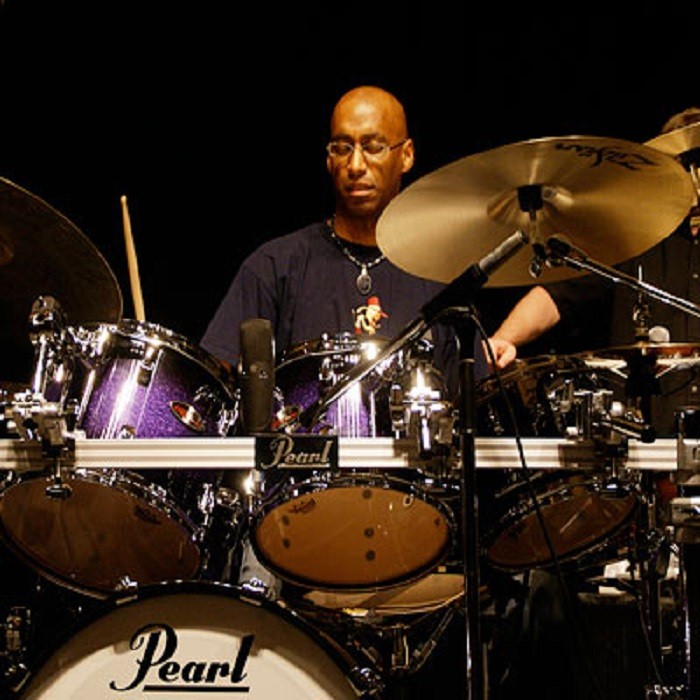 The legendary Omar Hakim takes advantage of every hot, new percussion option out there, from acoustic drums, to Roland's electronic V-Drums--which he MIDIs into his Power Mac--when he plays drums for and produces the greats of pop and jazz fusion. A well-recognized percussionist and producer in these two distinct worlds of music, Hakim may be the only person who can say he's played drums for David Bowie, Madonna, Sting and Miles Davis. "I had a natural affinity for drums and rhythm very young," says Hakim. "I started playing drums at about age five, when I got a toy drum as a Christmas gift from an uncle. They strapped that thing around my neck and I immediately started playing one of those marching cadence kind of beats." By the time he turned ten, Hakim was playing in his father's band. At age 15, he did his first tour. Music in the Tree Granted, music flowed through the genes of the Hakim family. His father, Hasan Hakim, played trombone for Duke Ellington and Count Basie. This heavy jazz influence helped to warm the younger Hakim's ear up for a part he would later play in one of the most famous jazz fusion acts ever, Weather Report. "My career really took off in 1980," recalls Hakim. "I met a guy named Mike Mainieri, an award-winning jazz vibraphonist, who also produced Carly Simon. Carly needed a drummer, so he hired me to play in her band." "When you get out there and people see you play, the word of mouth starts spreading pretty quickly," he adds. Electronics Shake the Drum World But in the 80s, the world changed for drummers. Roger Linn built the first commercially available drum machine, giving any non-percussionist with a few bucks the ability to easily create drum loops using samples of real drums. "This changed drummers' lives all over," explains Hakim. "But instead of feeling defeated by the whole trend, I decided to go my local music store, purchase a drum machine and learn how to use it." Like his first drum, Hakim learned to master the Linn Drum Machine very quickly. Suddenly, he found he could market himself around New York City as both a drummer and a programmer. From that point on, he got into electronic music. "I've pretty much followed the changes with electronic drumming from the 80s up until now," he says. "You've gotta stay on top of these technological changes. It's very important if you're a professional musician." When Hakim's friend Nile Rodgers started producing tracks for David Bowie, Rodgers referred Hakim to play drums on Bowie's "Let's Dance" album. Around the same time, Miles Davis introduced him to the band Weather Report. "I was the last drummer in that band, but that band turned my career around," says Hakim. "Sting and Dire Straits' Mark Knopfler were fans of Weather Report and they saw me playing with the group." Then in 1983, while he was on tour with Weather Report, Bowie's "Let's Dance" album came out, and suddenly Hakim found himself recognized as a key player in both the worlds of jazz and pop music. Striving Against Typecasting "Sometimes, if people know you from rock, they think of you as a rock drummer and don't expect you to play anything else. Or, if they know you in jazz, then they typecast you as a jazz drummer," explains Hakim. "I was conscious of the fact that I didn't want people to know me as a rock drummer or a jazz drummer, but as a total musician. So I always made sure I let people know that I was about music." "I knew that setting up my career in his way was going to make my life very interesting and would keep me open-minded musically," explains Hakim. "It was always very important to me that I expose myself to everything so that I could grow as a musician."