Half Man Half Biscuit 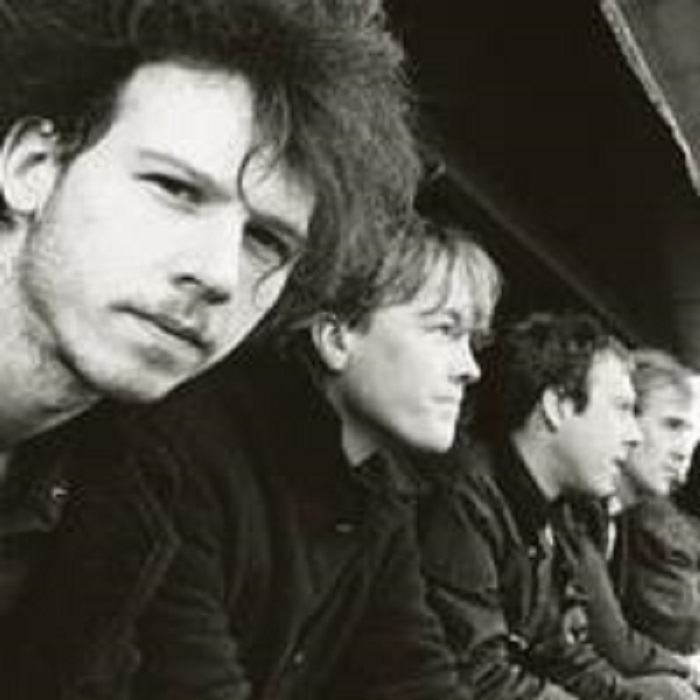 Half Man Half Biscuit, often abbreviated to "HMHB", are an indie rock band from Birkenhead, England, active sporadically since the 1984, known for its satirical, sardonic, and sometimes surreal songs. The group consists of Nigel Blackwell (lead vocals, guitar), Neil Crossley (bass), Ken Hancock (lead guitar), and Carl Henry (drums). Throughout their career they have been signed to Probe Plus records. The band's first single, The Trumpton Riots, topped the British Independent Chart in 1986, and they went on to perform a set at the Glastonbury Festival, rapidly becoming tipped as the 'next big thing'. Their sound at the time was very much in the post-punk tradition, with similarities to Josef K or The Fall. After the first record, someone in the band learnt to tune a guitar, which some feel removed something of the particular character of the music. So, as their second single "Dickie Davies Eyes" entered the national top 40, lead singer Nigel Blackwell announced his retirement claiming that rock and roll success had led to him missing too much daytime television. 1986 saw the release of a compilation album and Nigel's return to the dole. The band reformed in 1990, beginning to tour and give interviews. Their third album, McIntyre, Treadmore And Davitt, showed a move forwards in terms of musical technique, and a wider musical palette. Since then, the band have produced a new album every two or three years, and remain a much loved fixture on the British music scene. Half Man Half Biscuit were long championed by DJ John Peel, for whom they recorded twelve sessions before Peel's death in 2004, and it was on his programme in 1990 that the band announced their return. The band played live more and more infrequently, preferring one-off gigs to tours, driving home each night to sleep in their own beds and arranging concerts to coincide with Tranmere Rovers' away fixtures, a football team supported by Neil and Nigel. Half Man Half Biscuit famously turned down the chance to appear on seminal 80s rock show The Tube, as Tranmere were playing that night, even though Channel Four offered to fly them by helicopter to the game following their take in the studio. The band's musical styles often parody popular genres, while their lyrics are dense with cultural allusions, usually to UK popular culture and geography (Blackwell often refers to North Wales, often in the context of hillwalking in Snowdonia; he also appears fond of Shropshire, East Anglia and Oxfordshire) or to the more obscure backwaters of the lower divisions of British or international football. Blackwell's enthusiasm does not only encompass popular culture; to give just a few examples, explicit references to Sylvia Plath, the works of Thomas Hardy, and the Bible are all to be found in his lyrics. In the context of HMHB's enthusiasm for football, Blackwell's close resemblance to footballer Jaap Stam has been frequently commented upon. As the nineties progressed Nigel's love of blues and folk became more and more apparent both in musical style and lyrical references, as befits a group who perhaps more than any other record the minutiae of everyday life and culture. In 2002 Andy Kershaw dubbed them "the most authentic English folk group since The Clash". Bassist Crossley's musical tastes include many late-70s/early-80s new wave or post-punk bands, and at gigs HMHB have been heard to perform covers of tracks by acts as diverse as Joy Division, Tim Buckley, The Beach Boys and Tiffany. Blackwell has also started making references to various fictional bands who appear not only on the sleeves of HMHB releases (for example "Joe Public And The General Consensus") but also in the songs -- a long essay on "Evil Gazebo" (and that band's relationship to "Pankhurst") appears on the liner notes of Trouble Over Bridgwater and both bands are mentioned in the songs. Assorted fake cover version acts have also been mentioned in HMHB songs such as "I Can't Believe It's Not Focus". In interviews Nigel has alluded to the possibility of there being an HMHB tribute band called "It Ain't Half Man, Mum", most recently in a BBC Radio 3 interview with Andy Kershaw prior to summer 2007's appearance at the Brampton Live folk festival, where they headlined on Saturday night. However as yet no one has come forward with any evidence to support the existence of said tribute act, and the likelihood is that the whole thing is one of Nigel's own creations to amuse or confuse journalists and fans. The tribute band Half Arsed Half Biscuit do exist. In 2001, Nigel Blackwell provided the voice over for a BP television advert. The band's first release since 2005's album Achtung Bono is titled Csi:Ambleside, and was released on April 28, 2008. In April 2010, the band's 2005 song "Joy Division Oven Gloves" from Achtung Bono was the subject of a Facebook campaign to get it to #6 on the chart for 12 April 2010, in response to the rumoured closure of indie station BBC 6 Music. The song only peaked at #56 on 11 April 2010, but this was the first UK Top 75 chart appearance for the band in their history. It also reached No.3 in the Official Independent Singles chart the same week and was No.1 in the HMV UK Digital Downloads Top 40 Tracks on Friday 16 April, knocking Ultravox's Vienna off the top - itself part of a separate Facebook campaign the previous week. Lyrics are steadily being transcribed and argued over at The Half Man Half Biscuit Lyrics Project.