Agrotóxico is a Hardcore group from the poor neighborhood Cidade Ademar, São Paulo, Brazil. Formed in 1993, the original line-up was Mauro (Bass/Vocal), Marcos(Guitars) and Edu (Drums). After many line-up changes, the current line-up is Marcos (Guitars/Vocals), Jeferson (Bass/Vocals), Arthur (Guitars/Vocals) and Pedro(Drums). With lyrics talking about anarchism, political and social subjects, war, ecology, animal rights and songs about reality of the suburbs from Brazil, together with a fast drum beat, very powerfull guitar riffs, strong bass lines and shouted chorus, they're good example of how hardcore should sounds like. The first demo tapes named "Decadência" and "Sindicato do Crime" was released at 1995 with Mauro/Marcos/Jeferson/Silvio. In 1998, came the first album, Caos 1998, now with André in the drums. The songs "Marcas da Revolta", "Lei da Vingança" and "Não Quero Ouvir Mais Nada" may have your attention. The songs of this album retreat the life of band members in his environment, with struggles, police violence and poverty. After receive a invite from Fabio Sampaio from Olho Seco to "reborn" Olho Seco, Marcos, Jeferson and Andre accepted the invite and started a European Tour, making gigs at Amsterdam, Utrecht e Haia (Netherlands), Bilbao e Burgos (Spain), Lisboa e Loulé (Portugal ), Lubjiana (Slovenia), Berlim, Leipzig, Hannover e Hamburgo (Germany), Estocolmo (Sweden), etc. After touring europe playing in Olho Seco, Mauro left the band being replaced by Renato at the vocals. In 2002, the line-up was: Renato(Voc), Marcos(Guitars), Jeferson(Bass) and André(Drums), but André decided to left the band but before he leaves, they've recorded the second studio album, Estado de Guerra Civil. At this album, the lyrics changed, taking place the global situation, about G7 and multinationals that decide the future of the entire world. This album also contains the portuguese version of "Kuitenkin Kuolemme" from the finnish band Appendix and a cover version of "Psykiskt Instabil" from the swedish band Asta Kask. Without a dummer, the band started audictions and after 3 months, they picked up Pedro, drummer of the punk band Kaos 64. With the brand new drummer, they made a european tour across Germany, Netherlands, Portugal and Hungary, always being supported by Rasta Knast. As result of this partnership, they released a split album in 2003, in which Agrotóxico played classic punk songs from german bands (Slime, Canal Terror, Recharge, Molotov Soda and obviously, Rasta Knast) and Rasta Knast played brazilian punk songs (Ratos de Porão, Zumbis do Espaço, Cólera, Inocentes and Agrotóxico). In 2004, they made another european tour with another brazilian band Flicts, 27 gigs in 30 days, 8 different countries and as result of this tour, a split album with Flicts. The last album from Agrotóxico until now came in 2007, Libertação, and Arthur (from Flicts) joined the band as base guitar/vocals. The songs remain fast, strong and the second guitar added angry and fury to it, showing their strong influences from finnish/swedish from the 80's and the english hardcore from Varukers/Exploited, etc. You can hear Arthur singing the song "Ateus nas Trincheiras". 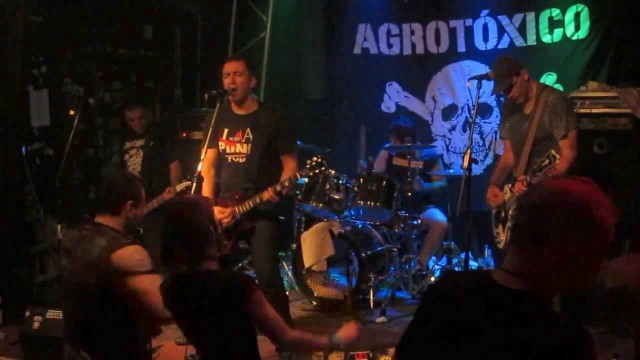