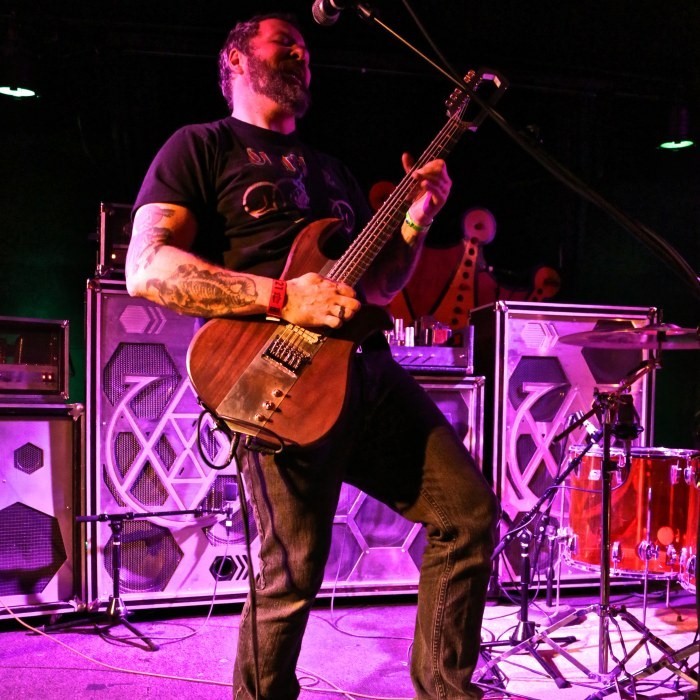 The Feather Tipped the Serpent's Scale (2012)

Eagle Twin is a two-man experimental/drone doom/sludge metal outfit from Salt Lake City, Utah, United States formed in 2007 featuring Gentry Densley (Ascend, Iceburn) on baritone guitar/vocals and Tyler Smith (Form of Rocket) on drums. Although Eagle Twin is a very new entity its helmsman, Gentry Densley is no stranger to innovative, heavy music. He was the musical visionary and leader of the legendary Jazz/Prog/Math Rock group Iceburn (aka The Iceburn Collective) from 1991 to 2001. Iceburn has been called the greatest and most important musical offering from Salt Lake City since the Osmonds! Gentrys' playing has been very influential to a lot of successful modern music groups such as Isis, Pelican, Sunn O))), etc. In order to disseminate his majestic and mountainous riffs in the present day he enlisted massively behemoth skinsman Tyler Smith. The drums are not only a driving force that efficiently steam rolls over you they conjure a repetitious mantra that is eerily infectious. Iceburn was primarily a instrumental force, but with Eagle Twin Gentry is much more vocal and the depth of his lyrics is endless. His vocal evocations bring to mind the hoarse rasp of Tom Waits and Howlin' Wolf but possibly channeled through Tuvan throat singers. His voice, is used much like an instrument and often times creates a unique drone of its own. The riffs and music definitely have familiar reference points (Caspar Brötzmann Massaker, Earth, Sunn O))), Melvins, etc) but are crafted in a way that stands miles beyond the others. "The Unkindness of Crows" was recorded to tape in Seattle by Randall Dunn (Earth, Sunn O))), Kinski, Ascend) and released in July 2009 by Southern Lord Records. Their second album, "The Feather Tipped The Serpent's Scale", was released, again by Southern Lord, on August 28, 2012. http://www.myspace.com/eagletwin