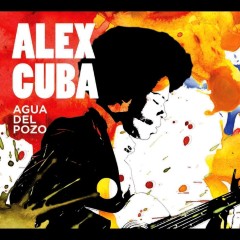 Alexis Puentes (born 1974), better known by his stage name Alex Cuba, is a Cuban-Canadian singer-songwriter who sings in Spanish and English. He has won two Juno Awards for World Music Album of the Year: in 2006 for Humo De Tabaco, and in 2008 for his second album, Agua Del Pozo. In 2010 he won the Latin Grammy for Best New Artist.

Biography:
Cuba was born in Cuba, spending his childhood in Artemisa, the son of guitar player and music teacher Valentin Puentes. He started playing guitar himself at age six. As an adult, he shifted into jazz fusion styles. He immigrated to Canada in 1999 after marrying a Canadian in Cuba. He and his twin brother Adonis first settled in Victoria, British Columbia, and worked as a duo, the Puentes Brothers, and received a Juno Award nomination. They started solo careers in 2004, but continued their songwriting partnership, with Adonis co-writing two of the songs on Agua Del Pozo. In 2003, Cuba moved to Smithers, British Columbia, the hometown of his wife, Sarah, whose father is politician Bill Goodacre. They have three children.
Collaborators on his debut, Humo De Tabaco, include Ron Sexsmith and Corinne Bailey Rae. "Lo Mismo Que Yo," a duet with Sexsmith, became a hit in the UK Singles Chart, reaching #52.
In 2009, he co-wrote and recorded a duet with fellow Canadian Nelly Furtado. "Mi Plan" turned out to be the title track for her fourth studio album of the same name. Cuba co-wrote more than half of the songs on Furtado's album.
His music reflects primarily Latin and African influences, but with a mix of funk, jazz and pop.
He received a Latin Grammy on November 21, 2013.