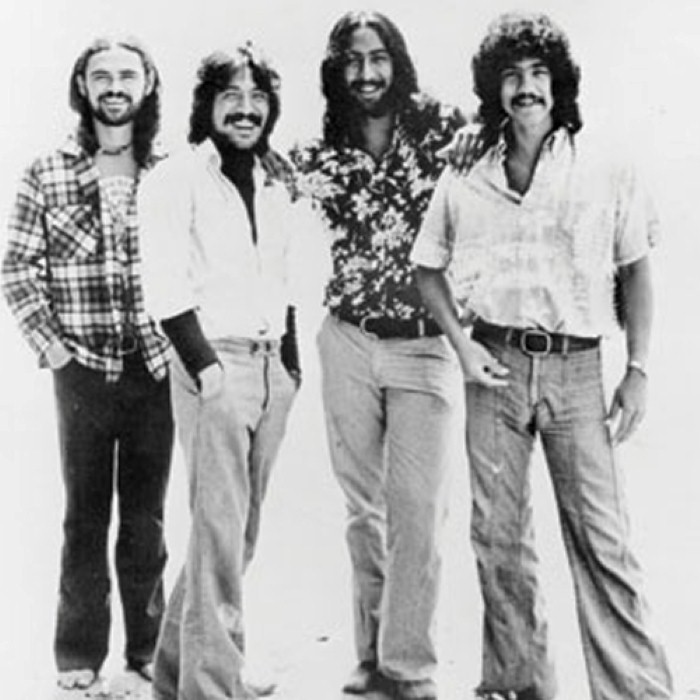 Kalapana is a Hawaiian group that performs pop and soft rock music. They are known for their songs "Naturally" and "The Hurt".

Early history (1973 - 1986):
In 1973, childhood friends David John (DJ) Pratt and Carl James Malani Bilyeu auditioned at the Rainbow Villa for Cecilio & Kapono. Malani was soloing at the Oar House in Hawaii Kai and DJ was downstairs at Chuck's in Sunlight with Kirk Thompson. They got together in DJ's grandfather's garage with Bryant Mackey Feary, another solo act, playing at the Oar House. They wrote songs, rehearsed, and at one point discussed the meaning of Kalapana. The literal translation of the word "Kalapana" is "sprouting money". Kirk said the meaning was "beat of the music", but he wanted "Dove" anyway. DJ thought it meant "Black Sand". Regardless, they named themselves Kalapana, playing their first gig at Chuck's in Hawaii Kai.
They became a regular band at a club called "The Toppe Ada Shoppe". They opened concerts for Earth, Wind & Fire, Batdorf & Rodney, The Moody Blues, Sly & The Family Stone, and Cecilio & Kapono. They released their first, self-titled album, Kalapana, which included Jackie Kelso on sax and flute, Bill Perry on bass and Larry Brown on drums.
Kalapana performed a three-concert event at the Waikiki Shell during the span of June 25-27, 1976, where 25,000 people attended. In 1977, they helped select the entrants for the "Home Grown" album project.
Kalapana won several Nani Awards, the predecessor to the Na Hoku Hanohano Awards. They were nominated for four categories and received "Best Performance by a duo or group", and "Best Male Vocalist" for Mackey, who had split from the group and joined Billy Kaui (Country Comfort).
The group reorganized to include Randy Aloya, replacing Mackey, who was pursuing a solo career, DJ, Malani, Kirk, Michael and Alvin. The reorganized group included Kimo Cornwell (formerly with Beowolf and later with Hiroshima) on keyboards, toured in Japan and released "Kalapana Live In Japan" (Sun Plaza), "Northbound", and "Kalapana Alive at Yokohama". DJ, as Kalapana, also released "Hold On" and a solo LP "Branded".
In Hawaii, Mackey & Malani regrouped and recorded "Kalapana Live Reunion", a concert at the Waikiki Shell. The group changed members over the next few years while each pursued solo and duo efforts.

Hurricane and Pony Canyon (1986 - 1999):
In 1986, the band had their album Hurricane released. Kalapana presented the album at a release party at Rascal Discothèque in Waikiki. The invitations were sent out with singles from the album; roses and T-Shirts were given away at the venue.
For the "Hurricane" concert, the band wore suits. For the song "Living Without You", the band was brought out wearing white zoot suit dinner jackets with red velvet bow ties. Kenji, Mackey, Malani, and DJ performed choreography during the concert.
Kalapana released "Lava Rock" in 1987, and performed with Hiroshima and Anri, musicians from Japan; Kalapana played at the grand opening of the Hard Rock Cafe in Honolulu. They performed in the Philippines for crowds of 10,000 people at two sold-out concerts, toured Japan, the West Coast US, Tahiti, Samoa, Guam, Saipan, and outer islands; their first feature length video of the Lava Rock Concert was taped at the Waikiki Shell. Kalapana toured Japan with Michael Paulo, who was then with Al Jarreau's band, and Tris Imboden, the drummer for Chicago. Following, Kalapana had a five album deal with Pony Canyon Records.
In 1997, Kalapana released the Hawaii version of "Captain Santa Island Music" with liner notes by international radio DJ Kamasami Kong. More recently, Kalapana released in Japan another CD titled "The Very Best of Kalapana", which is a compilations of 20 of their songs.
After battling drugs, drug treatment programs, and relapses, Mackey Feary was sentenced to prison. On February 20, 1999, Feary hanged himself in his jail cell. Feary's problems, and eventual suicide, called attention to the patterns of drug addiction and mental health and treatment needs.

Post-Feary era (1999 onward):
During the summer of 1999, Kalapana released "Love Under the Sun", the title song for FM Nagoya's compilation CD, which was used for FM Nagoya's Summer Campaign. Also, they recorded the theme song for the Asahi Super Cup, a series of sailboat races held off the coast of Oahu. Both recordings were done at TK Disc Studios, which are Japanese recording artist/producer Tetsuya Komuro's recording studios in Hawaii.
In November 2002, the group released the studio album The Blue Album. Two songs off of the said album feature Maurice Bega on vocals. Guest artists included the group Chant singing background vocals on "Ten Years After" (written by Komuro), Tris Imboden from the band Chicago on "Another Lonely Night", Michael Paulo on saxophone, and Pauline Wilson and Garin Poliahu on drums. James Studer appears throughout the CD with arrangements and keyboards.
Kalapana continues to tour and record in Japan and the West Coast. The releases, to date, on Pony Canyon are: "Back In Your Heart Again", "Kalapana Sings Southern All-Stars", and "Walk Upon the Water". The fourth LP, "Full Moon Tonight", was released at the time of the royal wedding in Japan in June 1995, and included a new version of "Hawaiian Wedding Song" done R & B style. Their latest album on Pony Canyon Records, "Captain Santa Island Music", consists of songs written for a clothing line in Japan. Each album contains redone arrangements of Kalapana songs, includes guests, and studio-recorded songs made for the respective album.
As of 2009, the band members were Malani, DJ, bassist Kenji Sano, and keyboardist Gaylord Holomalia.