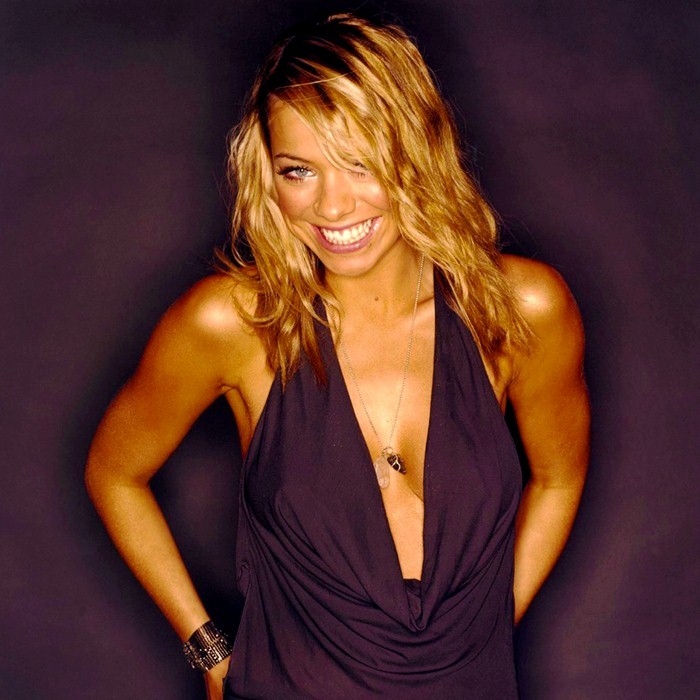 Elizabeth Margaret "Liz" McClarnon (born 10 April 1981) is an English pop singer, dancer and television presenter. She is a member of the girl group Atomic Kitten, with whom she has scored three number-one singles and also two number-one albums. In 2006 she went solo and the group reformed in 2012 as part of The Big Reunion, scoring a hit with a cover of Wizzard's "I Wish It Could Be Christmas Everyday".

Atomic Kitten:
In 1997, while McClarnon was still in secondary school, her music teacher arranged for her to take part in an audition with musician Andy McCluskey, who was aiming to create a new girl group. The group became Atomic Kitten, made up of McClarnon, Kerry Katona and Natasha Hamilton, and they released their first record in 1999. Katona left the group in 2001 and was replaced by Jenny Frost.
Atomic Kitten have had three UK number one singles, "Whole Again", "Eternal Flame", and "The Tide Is High (Get the Feeling)". They also had two UK number one albums, Right Now, and Feels So Good, both being certified double-platinum in the UK for sales of over 600,000 copies each. The total worldwide sales are estimated at 6.2 million singles and 4 million albums. Liz is the only member of the group to write any material.
On 4 March 2012, it was confirmed that the original line-up of Atomic Kitten - McClarnon, Hamilton and Katona - would reform for The Big Reunion, along with five other pop groups of their time - 911, Honeyz, B*Witched, Five and Liberty X.

Solo career:
Following Atomic Kitten, McClarnon was signed to All Around the World Records. She released her first solo single, a cover of Barbra Streisand's 1980 hit "Woman in Love", on 13 February 2006. The track was produced by Graham Stack along with Robin Gibb (of the Bee Gees), who also originally co-wrote the song and whom McClarnon accompanied on his 2005 tour.
A video was released to promote the song featuring McClarnon in a Manhattan apartment, but it was actually filmed in McClarnon's home town of Liverpool. It was decided to release the single as a double A-side with a cover of Jackie Wilson's "I Get the Sweetest Feeling". The single peaked at number 5 in the UK Singles Chart and, after more than six months on release, it peaked at number 16 in the Spanish charts on 22 October 2006. Also prior to her solo release, McClarnon appeared in the video for "Da Ya Think I'm Sexy?" with the FHM Hot 100, which charted at number 10 in the UK.
Since her first release, McClarnon has gone onto release one more single called "Don't It Make You Happy". The song was recorded in her bid to be selected for the UK's entry for the Eurovision Song Contest 2007 and McClarnon performed the track on the BBC's pre-Eurovision TV show Making Your Mind Up on 17 March 2007. However, she was unsuccessful and the single failed to chart. The competition was won by pop band Scooch.
McClarnon also recorded a single entitled "Lately", with friend Jaime Jay for the Global One Music Project. The same song has been recorded by different artists all around the world in different languages, and, in addition to English, McClarnon also recorded French and Spanish versions. The single was due to be released 18 May 2009, and although McClarnon and Jay had been promoting the single on a number of radio and TV shows, the release was postponed indefinitely.
Since then, McClarnon has continued recording her debut album. She parted ways with her old management company in April 2008, and is now managed by her ex-marketing manager, Scott Richardson at Belta CM. She is also currently working on her new Cook Book, The Can't Cook, Cook Book, due for release at Christmas 2010..

On 3 August 2009, McClarnon signed to 3 Beat Records, a subsidiary of All Around the World (through Universal Music). Her first single on the new label, "Not In Love", was due to be released in November 2009, and is a track she has written herself, influenced by Kylie Minogue's electro and club tunes. McClarnon performed the track at the Midlands Festival in 2009.
Her debut TV show, Hotter Than My Daughter, aired at the beginning of February 2010 for six weeks, on BBC Three.
In late 2010 and early 2011, she played Beth in Jeff Wayne's Musical Version of The War of the Worlds.
Following this, from 8 July to 17 September 2011, McClarnon was cast as Paulette in the first UK tour of Legally Blonde The Musical. She was followed by fellow Liverpudlian Claire Sweeney. She starred in the 'Cinderella' pantomime in the Liverpool Empire in 2012, playing the lead role.

Television appearances:
In August 2003, McClarnon presented a BBC programme about pensioners being forced out of their homes.
In 2005, she appeared in the ITV reality TV show, Celebrity Love Island, in which she finished second.
On 27 December 2006 McClarnon appeared in the ITV documentary The Girl With the Golden Hair, together with Richard O'Brien (The Rocky Horror Show). The documentary tells the story of the creation of the mini-rock opera of the same name, performed by the band ABBA during their 1977 Australian tour. McClarnon performs the three published numbers from that show, "Thank You for the Music", "I Wonder (Departure)" and "I'm a Marionette". She does not perform the final song from the musical, "Get on the Carousel", which was never released or published by ABBA, although a clip of the song shot during the tour does appear in the documentary.
On 25 July 2008, McClarnon was named Celebrity Masterchef Champion. Since then she has gone on to hold a regular position on Market Kitchen on the Good Food Channel, commenting on recent cookery books. She also appeared on four episodes of LK Today teaching a new and simple recipe on each episode as well as being interviewed on the show. McLarnon also created a pasta dish for Pizza Hut which came out in January 2009. She has confirmed that she is currently completing her own cookery book.
On 29 October 2008, McClarnon debuted as a presenter on the National Lottery. She was also at the 2009 Brit Award nominations event, at hand to update viewers. In March 2009, McClarnon appeared as a guest in the television programme Heston's Feasts starring chef Heston Blumenthal. In 2009, McClarnon took part in Ant and Dec's Saturday Night Takeaway, where she was participating on Ant's team throughout the series. McClarnon has also been a guest panellist on shows such as The Wright Stuff, Never Mind The Buzzcocks, and Shooting Stars and will soon appear on All Star Family Fortunes.
McClarnon presented the BBC3 show Hotter Than My Daughter which first aired on 4 February 2010 until March 2011. In 2010, she was a celebrity guest team captain on What Do Kids Know? along with Rufus Hound, Joe Swash and Sara Cox on Watch. Since 2010 she has been an occasional panellist on FIVE's The Wright Stuff.
In April 2012, she filmed a documentary for Dragonfly TV, with Channel 5, called My Cyberstalking Hell which aired on 12 August 2013. The program featured victims of stalking with harrowing stories, including Elle Richardson (known as Ellectrika) who also worked in the music industry, and who was cyberstalked for five years, causing her to end her music career, plus other victims including one who has been targeted by the same person as her and a woman whose sister was murdered by her ex-partner.
20 Dec 2014 contestant on Pointeless Celebrities on BBC1 and won.

Other work:
McClarnon is an ambassador for the charity Youth Music.

Personal life:
McClarnon was born in Liverpool and currently lives in London. She is a fan of Everton FC.