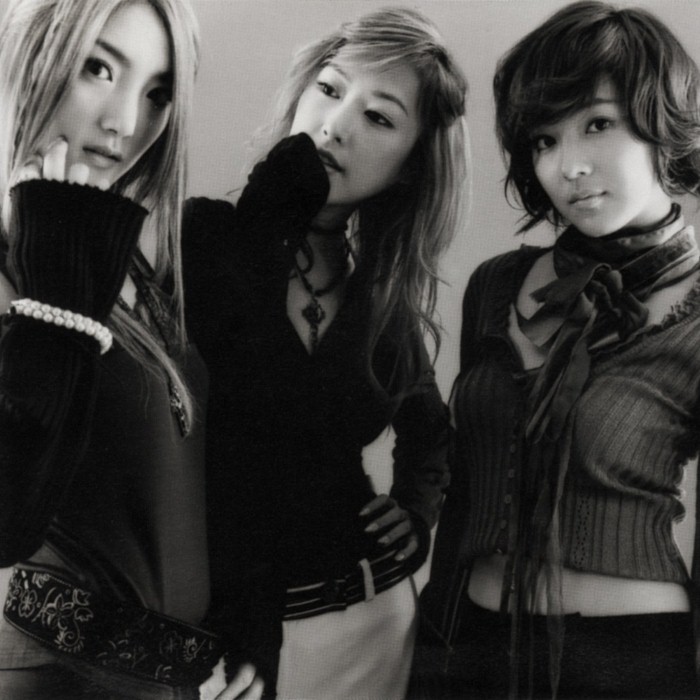 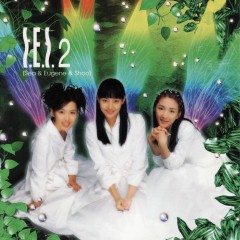 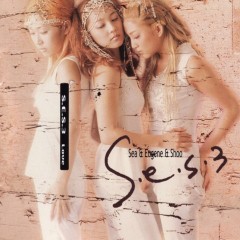 S.E.S. (Hangul: 에스.이.에스; acronym for Sea, Eugene, Shoo) was a South Korean girl group under the management of SM Entertainment. Lasting from 1997 to 2002, they were viewed as the female version of H.O.T., another SM group who also enjoyed phenomenal popularity during the same years.
S.E.S. was K-pop's first highly successful girl group. They were challenged by groups like Fin.K.L (Hangul: 핑클) and Baby V.O.X (Hangul: 베이비복스) debuted soon after S.E.S. and were also successful. Although an intense rivalry developed between S.E.S. and Fin.K.L fans, members of both groups have always stated that there was no rivalry and that they in fact were friends. However, while S.E.S. managed to consistently have high sales numbers for their albums, it was Fin.K.L who won a daesang (대상) (the Korean equivalent of the Grammy Award) for "Artist of the Year", from various music award shows.S.E.S have already sold approximately 3,255,000 Korean albums alone.
Through the years, the members have gone through various style and image changes, from cute to sexy to mature, without losing their strong fanbase. S.E.S. broke up at the end of 2002, and its members have gone solo to varying degrees of success.

Pre-debut: Discovery:
The official biography video states that Bada was the first one discovered in 1996, when Lee Soo Man saw her singing at her performing arts school. Taken by her voice, he quickly offered her a recording contract, and was therefore the first member to be chosen. Eugene, on the other hand, did not first appear in person. She, in fact, sent in a video from Guam, where she was living at the time, which showcased her bubbly personality. SM executives saw the video and agreed that Eugene could be a star. The last member to join was Shoo, who was the only member to go through a "real" audition process. Executives figured that Shoo would be a nice fit to the group, and so the group was formed. They quickly began training, going through voice, dance, and interview lessons.

1997-1998:
They released their first album in 1997 under SM Entertainment, and had their public debut in November 1997. Their look at the time was very innocent, with their songs being cute love songs. However, they also made sure that they were seen as talented entertainers. In much of their promotional work, including an appearance on Korean diva Lee Sora's "Propose" show, they displayed their talent: Eugene demonstrated her piano training, while Bada showed off her strong voice, Shoo backing her up with her harmony. Lee Soo Man's promotional strategy worked: "I'm Your Girl" (which had Shinhwa members Eric Mun and Andy Lee rapping in the introduction) and "Oh, My Love!" became huge hits for S.E.S., and they quickly became one of the top-selling groups in K-Pop. As Bada was the main singer, she usually took the choruses of songs and had solos in which she could show off her vocal range. Eugene was quickly chosen by fans as the pretty member of the group, while Shoo, although not unpopular, was not noted for any special talents except being fluent in Japanese.
Their second album, Sea & Eugene & Shoo, was released in 1998. They changed little from their first album, although for their first single, "Dreams Come True" (a cover of Finnish group Nylon Beat's "Like A Fool"), they had a very space-themed look with funky hair and shiny outfits. The music video followed the theme as well, which had the girls take on fairy images. This song also became a huge hit, along with "너를 사랑해 (I Love You)", which saw them returning to their cute looks. The album sold over 650,000 copies.
They also managed to release a Japanese album, Meguriau Sekai, in 1998, although it fared poorly. In between their Korean albums, S.E.S. would continue to release Japanese singles and albums, but these were never as widely received as their Korean works.

1999-2000:
At the end of 1999, their third album, Love was released. It was their best-selling album, selling over 762,000 copies; this is currently the record for best-selling album in Korea by a female group. This album also saw a marked change in their image, away from cutesy girls into edgy singers. All of them dyed their hair and had unusual leather outfits for their promotional activities. In fact, Bada bleached her hair blonde without the knowledge of her management, thinking that it would fit the album concept well. Their fans ate this up, and the title song from the album, "Love", a medium tempo pop song, became a huge single for S.E.S.. This was helped by their sophisticated video, which was made in New York City and cost over US$1,000,000;a large amount spent on a music video at that time. Their second single, "Twilight Zone", which was a R&B-pop song, also saw the continuation of this edgy, grown-up theme, although all of them changed their hair colour into darker shades. However, this concept was abandoned at the end of their promotional schedule, as all three girls reverted to a simpler image; the dance for "Twilight Zone" changed as well. Promotional activities stopped at the end of January 2000.

2000-2001:
December 2000 saw the release of S.E.S.'s fourth album, A Letter From Greenland. This again was accompanied by a change in image. This album saw them move away from the cute image entirely, having instead a "mature women" concept. All the members wore suits for their performances, and their look was significantly more sophisticated. The style of their songs also moved away from light pop music: instead of having cute poppy songs (like their first two albums), or R&B-pop songs (like their third album), this album was very jazzy. "감싸 안으며 (Show Me Your Love)" was their first single from this album. A cover of j-pop star Misia's "Tsutsumi Komu Youni...", the song was a slow, jazzy ballad that was technically one of their best singles, showing off the vocal abilities of all three singers. This single and album continued S.E.S.'s winning streak, helping to cement their status as K-pop's reigning queens. They also released a second single, "Be Natural", which did fairly well but was under-promoted in comparison to "Show Me Your Love".

2001:
In the summer of 2001, a special album was released (receiving the ".5" label). Called Surprise, their 4.5th album was a collection of their Japanese songs re-recorded in Korean (with new instrumentals). The first single, "꿈을 모아서 (Just In Love)", brought S.E.S. back to a happy, poppy theme, although they avoided the cutesy images from their debut. The video was filmed in Thailand, and it matched the sunny theme of the song quite well. "Just In Love" was a very popular song, and it was heavily promoted. However, Bada collapsed from exhaustion during a performance on one of Korea's major music shows. Because of this, S.E.S. stopped promotional activities early and released the other singles without "real" music videos (being compilation or montage videos instead) or promotion efforts. The album underperformed compared to the group's previous works, although it still managed to sell more than 350,000 copies.

2002:
Their last major album, Choose My Life-U, was released in early spring of 2002. This was a continuation of their sophisticated theme, with the album booklet full of suggestive pictures of the girls. Their first single "U" was quite different, being very dance-intensive; the video showed the girls in dominant roles and positions, with Eugene even becoming a dominatrix for one scene. This song also did well and returned S.E.S. to the top of the charts. "Just A Feeling", their second single from this album, was an energetic dance track with an equally energetic video. However, their promotional schedule for the song was limited and it was not performed as often as their other singles. "Feeling" became one of their few singles to not hit the top spot on the music show charts.
Their last album as a group, Friend (their "5.5"th), was released at the end of the year. Their single was titled "Soul II Soul (S.II.S.)", which was a play on words (as the number 2 can be pronounced as "E" in Korean). The music video, though, was quite dark, as Bada is seen writing letters while crying, Eugene is cutting up bunnies in a room (suggesting mental instability), and Shoo is seen caressing a large ball of light on her bed. However, it did not create much controversy, because it was officially announced that S.E.S. was breaking up at the end of 2002. Although Eugene was the first to leave, news reports stated that the girls had promised each other at the end of 2000 that they would break up in a couple of years, no matter what. The news did not increase sales of their last album: final numbers ended up being under the 100,000 mark.

Presently:
Currently, all the members are busy working on individual careers. Although Shoo was the only member who had decided to stay with SM after the first contract expired, she later chose to also leave SM Entertainment in 2006. Shoo has differed from her former band mates in that she did not pursue a solo music career; instead, she has done musicals such as Bat Boy, which have added to her credibility as a singer.
The other two have since signed with other companies: Bada is under JIIN Entertainment, while Eugene is with PFull Entertainment. Both of them have pursued solo music careers, with varying degrees of success. While Bada's first album had strong sales, her second performed dismally. Her last record, though, has resuscitated her career. Eugene, on the other hand, had two albums with mediocre sales numbers, both with a strong first single. She has since moved on to acting, however.
All three members have said that S.E.S. may regroup sometime in the near future. Only time will tell if this will actually happen, but the three of them are still together in some capacity, being close friends. In fact, when receiving a special award from MTV Korea in November 2005, the three re-united and sang a song from their fifth album, to the surprise and delight of their fans.
In 2007, the group reunited again celebrating their 10th anniversary, and in 2008, they appeared as a group on the Korean show Happy Sunday, though a reunion is not clear. In October 2009, they made another appearance together as a group on the show Come to Play.