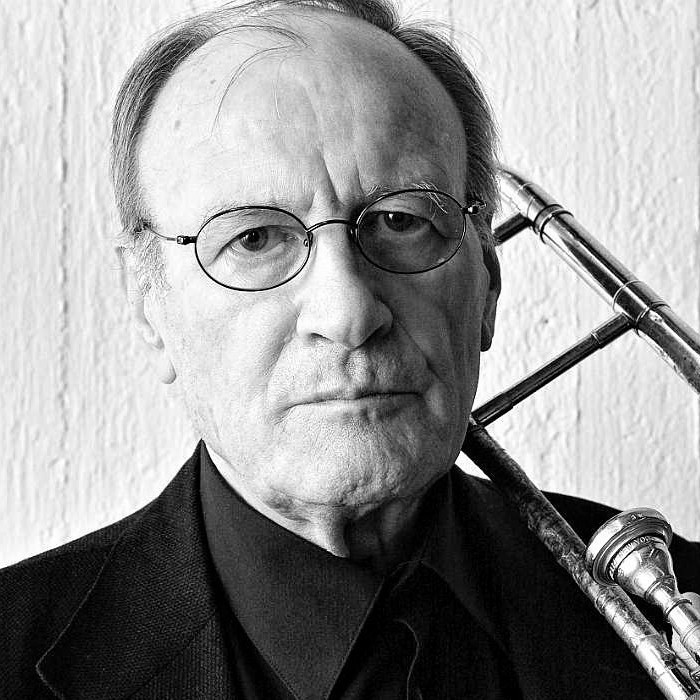 Albert Mangelsdorff And His Friends (1969)

Mangelsdorff was born in Frankfurt. He was given violin lessons as a child and was self-taught on guitar in addition to knowing trombone. His brother, alto saxophonist Emil Mangelsdorff, introduced him to jazz during the Nazi period (a time when it was forbidden in Germany). After the war Mangelsdorff worked as a guitarist and took up trombone in 1948.
In the 1950s Mangelsdorff played with the bands of Joe Klimm (1950–53), Hans Koller (1953–54) (featuring Attila Zoller), Jutta Hipp (1954–55), as well as with the Frankfurt All Stars (1955–56). In 1957 he led a hard bop quintet together with Joki Freund which was the nucleus of the Jazz-Ensemble of Hessian Broadcasting (with Mangelsdorff as its musical director until 2005). In 1958 he represented Germany in the International Youth Band appearing at the Newport Jazz Festival. In 1961 he recorded with the European All Stars (further recording in 1969). In the same year he formed a quintet with the saxophonists Heinz Sauer, Günter Kronberg, and bassist Günter Lenz and drummer Ralf Hübner which became one of the most celebrated European bands of the 1960s. In 1962 he also recorded with John Lewis ("Animal Dance"). After touring Asia on behalf of the Goethe-Institut in 1964 his quintet recorded the album "Now Jazz Ramwong" later that year which made use of Eastern themes. He also toured the USA and South America with the quintet. After Mangelsdorff's involvement in the European free jazz movement Kronberg left and the quartet remained (1969–71).
During the early seventies the quartet was revived with Sauer, Buschi Niebergall and Peter Giger (1973–76). At the same time Mangelsdorff was exploring the new idiom with Globe Unity Orchestra, but also with many other groups (e.g. the trio of Peter Brötzmann). At that time he discovered multiphonics, long solistic playing and experimental sounds.
He performed as unaccompanied trombonist in an impressive concert set. In the 1970s he made first solo recordings and collaborated with Elvin Jones (1975, 1978), Jaco Pastorius and Alphonse Mouzon (1976), John Surman, Barre Phillips and Stu Martin (1977) and others. In 1975 he was co-founder of the United Jazz and Rock Ensemble that existed for more than 30 years, and recorded duo albums with Wolfgang Dauner (from 1981). In 1976 Mangelsdorff started teaching jazz improvisation and style at Dr. Hoch's Konservatorium in Frankfurt.
In the 1980s and 1990s Mangelsdorff continued to perform in solo and small settings, also playing with the Reto Weber Percussion Ensemble and Chico Freeman. Together with French bassist Jean-François Jenny Clark he founded the German-French jazz ensemble. In the 1990s he was also touring and recording with pianist Eric Watson, bass player John Lindberg and drummer Ed Thigpen and a second quartet with Swiss musicians and Dutch cellist Ernst Reijseger.
In 1995 he replaced George Gruntz as musical director for the JazzFest Berlin. Since 1994 the Union of German Jazz-Musicians awards a regular prize in Mangelsdorff's honor, the Albert-Mangelsdorff-Preis.
In 2007 the album Folk Mond & Flower Dream was re-released on CD. This album, produced by Horst Lippmann in 1967, was the last recording of the Albert Mangelsdorff Quintett. For more than twenty years the original master tapes of the recording seemed to be lost until they were found in spring 2007 in the archives of Horst Lippmann. 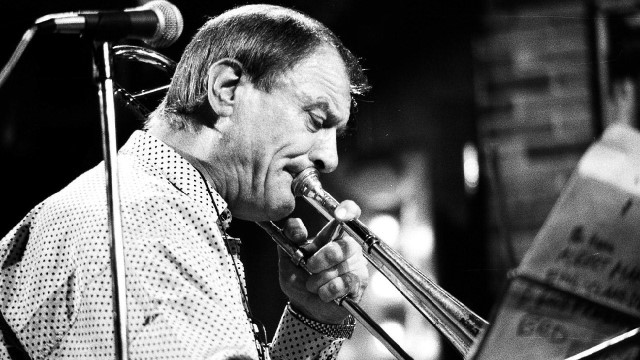