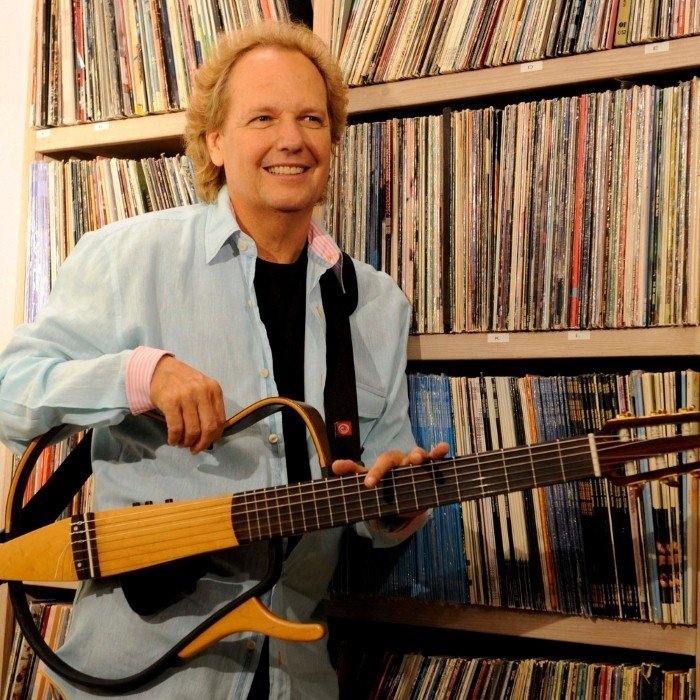 Lee Mack Ritenour (born January 11, 1952) is an American jazz guitarist, session musician, and composer. Ritenour has contributed to over 3000 sessions, and has charted over 30 contemporary jazz hits since 1976.
Biography :
Ritenour played his first session when he was 16 with the Mamas & the Papas and given the moniker, "Captain Fingers", because of his manual dexterity on the guitar. Ritenour was a sought-after session guitarist by the mid-1970s, and won Guitar Player magazine's Best Studio Guitarist twice in the 1970s. He is noted for playing his red Gibson ES-335 and his Gibson L5 guitars.

One of his most notable influences is the pioneering jazz guitarist Wes Montgomery among others like Joe Pass, Kenny Burrell and John McLaughlin. His prolific career includes a Grammy Award for the collaborative work Harlequin (1985), and 19 other Grammy nominations. Ritenour also holds the distinction of having two of the promotional videos for his songs "Is It You" and "Mr. Briefcase" being played during MTV's first day. Ritenour has been at the top of many guitar polls throughout the world.

Throughout his career, Ritenour has experimented with different styles of music. A true fusionist, he has often incorporated elements of funk, pop, rock, blues, Brazilian and most recently with Amparo (2008), classical music with jazz. In the early 1980s, Ritenour was given his own Ibanez signature model guitar, the LR-10. The LR-10 was produced from 1981 to 1987. It can be heard exclusively on his album Rit. Currently, Ritenour plays the Gibsons that he first played in the 1970s (the ES-335 and L5), and now also plays his signature Lee Ritenour Model archtop guitar made by Gibson.

Style
Ritenour's solo career began in 1975 with the recording of his album First Course. Released in 1976, the album gave a strong representation of the mid-1970s L.A. Jazz/Funk sound. Critics did, however, complain that his first album was "lightweight." So Lee countered this with his strongly crossover-based follow up, Captain Fingers. This was followed by two more crossover efforts—The Captain's Journey (1978) and Feel The Night (1979). On these albums, Ritenour primarily used something of a rich, yet rock-oriented distorted guitar sound, coming from his Gibson ES-335 guitar. In other instances on these albums, clean sounds were heard coming from his Gibson L5 and classical acoustic guitars (he played his classical acoustic guitars almost exclusively on his album Rio in 1979). In the 1970s, Ritenour would often use effects like wah-wah, phasers, chorus, and flangers on his electric instruments. Also, during the late 1970s, Ritenour can be heard using the 360 Systems guitar synthesizer (he is pictured sitting in front of it on the back cover of his Captain Fingers album). He can be heard using the synthesizer on the track Captain Fingers (from the album with the same title), and can also be heard playing solo with the synthesizer on the song "What Do You Want?" from The Captain's Journey.

In 1979, Ritenour "was brought in to beef up one of Pink Floyd's The Wall's heaviest rock numbers, "Run Like Hell"." He also played "uncredited rhythm guitar" on "One Of My Turns".

As the 1980s began, Ritenour began to add stronger elements of pop to his music, beginning with Rit in 1981. For this, he kept with his distorted sound, now using his Ibanez LR-10 signature model guitar. One of tracks from "Rit", entitled, "Is It You" featuring vocals from Eric Tagg became a hit reaching number fifteen on the pop chart and number twenty-seven on the soul chart. He continued with the pop-oriented music for two albums after Rit (Rit/2 in 1982 and Banded Together in 1984), while releasing a slick, yet more crossover-styled, Direct-Disk instrumental album in 1983 called On The Line. He also provided rhythm guitar on Tom Browne's hit, Funkin' for Jamaica.

The Lee Ritenour Gibson L5 Signature archtop guitar.
In 1985, he recorded his first album for GRP with Dave Grusin, entitled Harlequin. It featured Lee primarily on his classical acoustic guitar and also featured Brazilian singer/songwriter Ivan Lins. Up to this point, this album along with Rio arguably gave the strongest representation of Lee's Brazilian influences.

The following year, 1986, Ritenour released the album Earth Run, which featured him using the then-newly designed SynthAxe guitar. He used nine different guitars on the album, most notably the SynthAxe, his Valley Arts guitar, and his Gibson Chet Atkins acoustic. The album also featured long-time collaborator Phil Perry for the first time, on the track "If I'm Dreaming, Don't Wake Me" — a song also featuring David Foster and Maurice White. He also produced songs and played guitar on Deniece Williams's LP Hot on the Trail during that same year.

Ritenour continued in a direction strongly featuring other artists in 1987, with Portrait. The album itself has something of a strong smooth-jazz sound, and Ritenour can be heard here playing with The Yellowjackets, Djavan, and Kenny G.

In 1988, his smooth jazz-influenced Brazilian music came to the forefront with Festival — another album strongly featuring his work on nylon-string acoustic guitars. The following album, Color Rit, continued with a similar mood. He did however, change direction completely again with his straight-ahead jazz album Stolen Moments. Sounding similar to Wes Montgomery, Ritenour played alongside long-time collaborator, saxophonist Ernie Watts, pianist Alan Broadbent, bassist John Patitucci (playing only acoustic) and drummer Harvey Mason. Continuing in a Wes Montgomery mood, Ritenour paid tribute to the man himself in 1992, with his album Wes Bound. The album featured a number of covers of Montgomery compositions, as well as some seemingly tributary pieces from Ritenour himself.

Also seen in this decade was a 1994 collaboration album with guitarist Larry Carlton called Larry & Lee.

In 1991 Lee Ritenour, together with keyboard player Bob James, formed the Grammy-nominated contemporary jazz group Fourplay. Lee left the hugely successful group in 1998 to continue with his own solo works. He was replaced by Larry Carlton.

In February 2004, Ritenour completed a project looking back on his career involving musicians he has worked with throughout his career called Overtime. Overtime was recorded live in a studio in front of a small audience. It was released in early 2005, and is currently available as a singular audio CD, double-DVD set or singular HD DVD. Some of the musicians featured include Dave Grusin, Patrice Rushen, Harvey Mason, Alex Acuna, Taylor Dayne, Nathan East, Chris Botti, Anthony Jackson, Melvin Lee Davis, and Ernie Watts, amongst many others.

His album entitled Smoke n' Mirrors was released in late August 2006. His son Wesley makes his debut appearance as a drummer on the album at the age of 13. This album contains Ritenour's version of Bill Withers' 1978 hit "Lovely Day".

In June 2010, in order to celebrate his fifty years as a guitarist, Lee Ritenour released the album 6 String Theory (in reference to 6 musical areas covered by the use of guitar). The album featured famous guitarists such as Steve Lukather, Neal Schon, John Scofield, Slash, Pat Martino, Mike Stern, George Benson and B.B.King, but also younger players such as Andy McKee, Joe Robinson and Guthrie Govan. Ritenour, YamahaCorporation, The Berklee College of Music, Concord Records, Monster Cable, and D'Addario Strings collaborated to create the 2010 Yamaha 6 String Theory Guitar Competition. The winner of that international competition, that included guitarists from over 45 countries, was 16-year-old Canadian classical guitarist Shon Boublil. The competition in 2011 is continuing. 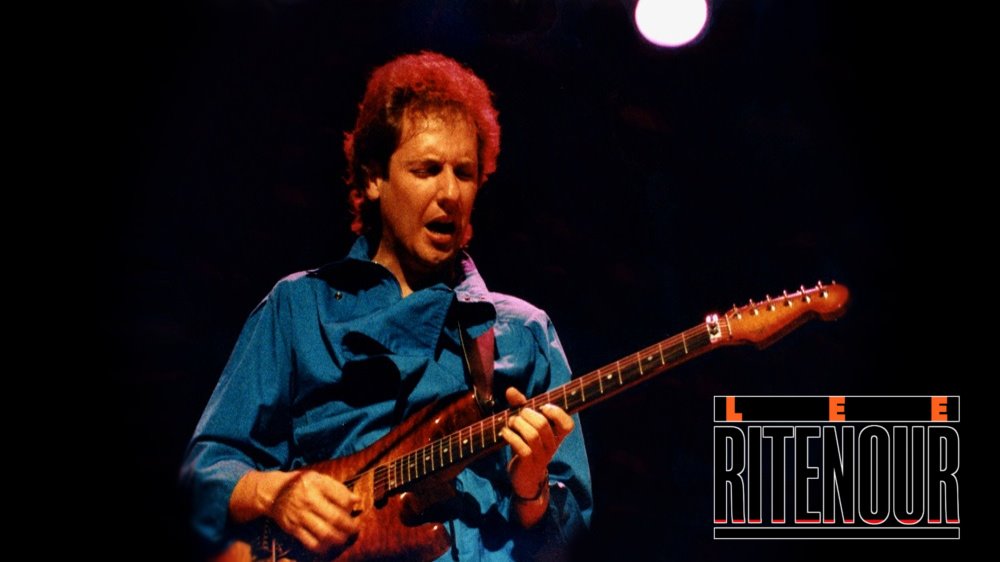 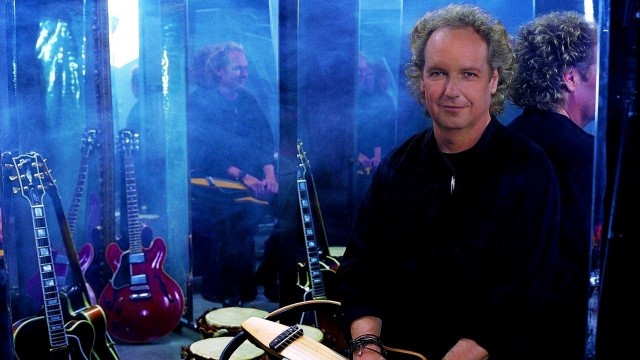 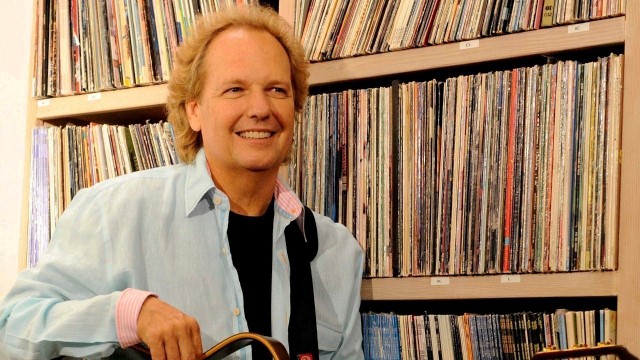 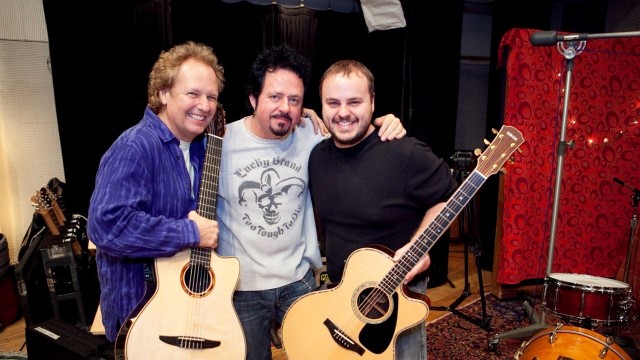 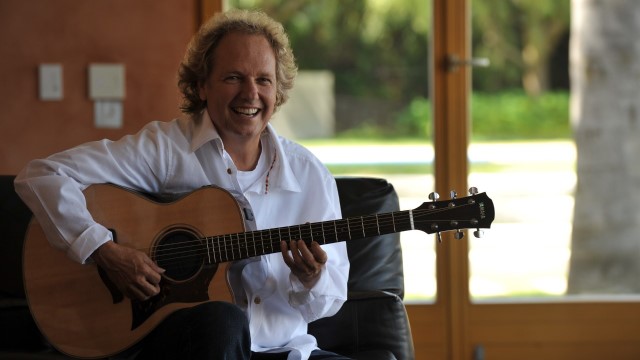