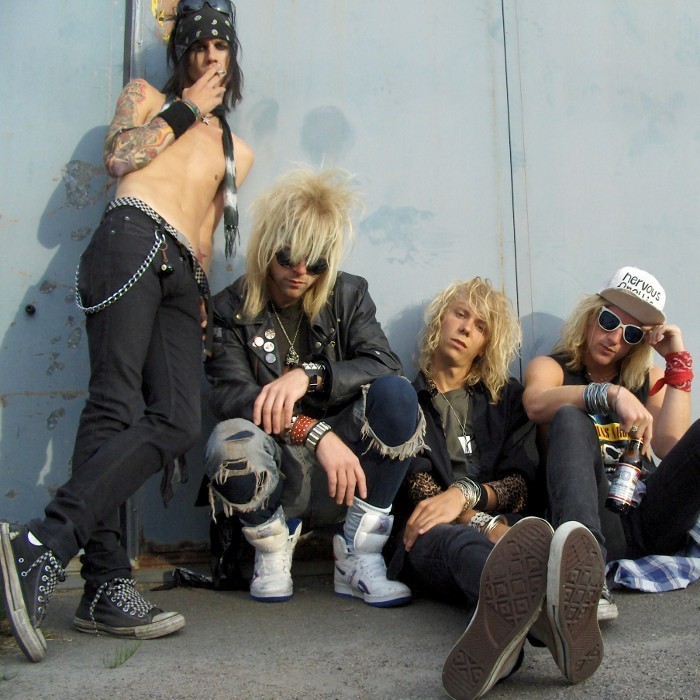 Vains of Jenna was a Rock band formed in Falkenberg, Sweden during January 2005. They later moved to Los Angeles, California, though most of the band members now reside back in Sweden. On January 26, 2012, the band confirmed on Facebook and MySpace that they had "mutually and amicably" decided to disband.

Vains of Jenna was formed by four young people from Sweden. At that time the two youngest members of the band were 18 years old. They were offered a chance to play at Crüe Fest Hollywood in January 2005. The band accepted and traveled to California for the show. Only one disc had been recorded at that time, a 4 song demo containing: "No One's Gonna Do It For You", "Hard To Be Vain", "Heartbreak Suicide" (the song that got them to Hollywood) and "A.S.A.D."
Vains of Jenna captured the attention of Stevie Rachelle, Tuff singer and the owner of hard rock website Metal Sludge during their first ever performance in America playing at the Whisky a Go Go in Hollywood during the charity event Crüe Fest Hollywood! Rachelle offered the band a demo deal and manger's contract 48 hours later. Rachelle booked the band to record at Redrum Studios with his friend former Guns N' Roses guitarist Gilby Clarke producing. The band had only been in Los Angeles for 1 week when all this took place. 1
After spending the winter in Sweden they toured the United Kingdom in the spring of 2006. The band lived in guitarist Nicki's Volvo station wagon for a month between playing gigs around London and surrounding cities. In May the group relocated to California. The band toured coast to coast and in many cases were not old enough to play bars they were booked in which had a minimum age of 21. This would sometimes leave half the band in the van outside, only to be let in to load up on stage, play and then leave at the end of their set. One of these such tours was when Rachelle flew the band to the East Coast in the summer of 2006 where they played 1st slot in support of UK band Teenage Casket Company and The Erotics from New York.
During that American east coast tour in July 2006, the run was cut short as Bam Margera of the show Jackass had recently signed the band to his Filthy Note Records label.2 Margera invited the band to his mansion to shoot a video for the song "No One's Gonna Do It for You," which Margera produced himself 3 and used "Don't Give A Damn" as the theme song to his upcoming MTV series Bam's Unholy Union. The band was featured in two episodes of the show.
Articles in Spin, Metal Edge, Revolver, Blender, Hustler and other international print magazines followed. They found themselves on TV shows such as Jackass 24 on MTV and LA Ink featuring good friend and fan of the band Kat Von D. The band was a guest on her TV show and at the MusInk Festival in Southern California, where she appeared.

Lit Up/Let Down, the band's debut full-length album, was released in stores on October 24, 2006.
During the early part of 2007 manager Rachelle called another old friend Bobby Dall of the band Poison. Rachelle had heard about the band's plan to tour in the summer with special guest Ratt. Rachelle pushed Dall to add the young band to the tour. After weeks and months of calls and hard work, the band was initially added to the side stage on several of the Live Nation produced events. As the tour grew closer White Lion encountered some legal troubles and had to pull out. Since the band White Lion had to drop out, Rachelle pressured Dall to move his band onto the main stage for of the Summer 2007 tour. After more hard work, it finally happened and Vains of Jenna was indeed added to the main stage for the entire North American 2007 summer tour. The band also toured the US on the Viva La Bands Tour along with Cradle of Filth, Gwar and CKY in fall 2007.
During the Viva La Bands tour there was an incident that Bam Margera has talked about publicly. It seems that the band's on the tour all liked Vains of Jenna but there were some problems with Cradle of Filth. In particular, their crew. At a show in Florida the Cradle of Filth tour manager kicked Nicki Kin amd JP White out of the band's dressing room area. It was done so with disrespect. Kin and White did not take kindly to it and returned to attack and beat up the tour manager. The beating of this individual was only ended as members of Gwar saw it happening and came to save him. The beating was severe enough that the Cradle of Filth tour manager sustained injuries. The staff at the venue even went as far as to watch playback on their surveillance system of Kin and White kicking in the dressing room door and attacking the British resident. Cradle of Filth were so upset they demanded that Vains of Jenna be removed from the remainder of the tour. When Bam Margera was confronted with the incident, and file footage as evidence, his only reply was, "This is the coolest thing that has happened on this whole tour." The Jackass star refused to kick the band off the tour and they remained for the duration.
In late 2008 and early 2009, the band toured parts of Europe including the UK, Italy, Scotland, Denmark and Sweden. This included a spot on the Sweden Rock Festival in June 2009.
Vains of Jenna then returned to the United States to record a new album. The new disc was produced by Brent Woods (Wildside). It included a cover of "Refugee" by Tom Petty, among other songs. The band released a new song, "Get It On," on iTunes in July 2009. On September 15, Vains of Jenna released their second full-length album, The Art of Telling Lies. The band filmed a video for the first single "Get It On," and a second video with director Noah Shulman (Kings of Leon) in New York City for the following single "Mind Pollution."
On March 15, 2010, front man Lizzy DeVine and Vains of Jenna announced that they were parting ways. Less than a week after Lizzy's departure, the band hired Cast of Kings singer Jesse Forte as the new front man. In August, Vains of Jenna released an EP with a new song, "We Can Never Die," and new versions of "Everybody Loves You When You're Dead," "The Art of Telling Lies" and "Better Off Alone."
In October 2010, the band returned to the US to begin the "We Can Never Die" tour and played shows in South America. In November the band entered the studio with producer Adam Hamilton to record a "special edition" covers album for Deadline Cleopatra Records. The album, Reverse Tripped, was released on April 5, 2011. The first single/video is a cover of Cee Lo Green's "Fuck You." A radio edit is included called "Forget You." "Reverse Tripped" was followed by a 54 city North American Tour, and an equally long European tour.
On January 21, 2012, it was announced that Vains Of Jenna lead singer Jesse Forte joined Lynch Mob (soon after this announcement their old lead singer returned, leaving Jesse out of Lynch Mob). Several days later on January 26, the following message was posted on Vains Of Jenna's official Facebook & Myspace pages: "Vains Of Jenna calls it quits. After 7 years, we have amicably and mutually decided to end Vains Of Jenna. There's no drama behind the decision. We simply feel like it is time to move on in our lives and close this chapter. It has been a truly amazing journey for us over the years and we are grateful for the opportunity to do what we've done with this band. A huge thanks to everyone involved, all of our supporters, and of course all of our fans from around the world. We love you. 1,2,3,4 THE END!!! Nicki, Jacki, JP and Jesse."