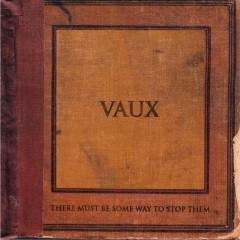 Vaux was formed in 1997 in Denver, Colorado, under the original name Eiffel. The band was comprised of Quentin Smith, Chris Sorensen, Ryder Robison, Adam Tymn, Joe McChan, and Greg Daniels. They released a 7" single themselves, To Write A Symphony, in 1998. Indie label Undecided Records signed the band after they had toured the East Coast extensively for two years, and the band's debut album Audiblenarcotic was released in 2000. The album was a minor success on college radio, and the band earned a spot on the 2001 Warped Tour. In July 2002, for legal reasons, the band had to change its name, deciding on Vaux. In 2002, Vaux moved to Orange County independent label Volcom Entertainment and released the EP On Life; Living, and the following year, second full-length There Must be Some Way to Stop Them. The album received widespread critical acclaim, prompting Alternative Press magazine to include Vaux in their 100 Bands to Watch feature. During this time, the band embarked upon successful tours supporting Thrice, My Chemical Romance, Coheed and Cambria and The Used. In January 2004 Vaux signed to major label Atlantic Records. Shortly after, the band released a 5-song EP, Plague Music, on Equal Vision Records. The band's major label debut, Beyond Virtue, Beyond Vice was due for release on November 8th, 2005. However, Vaux recently severed ties with Atlantic. The band has since released the album themselves which was available to purchase on their last headlining tour and is available on their webstore in limited quantities. After severing ties with Lava Records, Vaux formed their own record label called Vx Records and released "Beyond Virtue, Beyond Vice" independently with distribution through Outlook Music Co. in August of 2006 and also released two limited edition CD singles. On Tuesday, 22 August 2006, the song Are You With Me? was released as the Single of the Week in the iTunes Music Store. In Fall 2006 Vaux announced the departure of bassist, Ryder Robison, and that they would continue on as a 5-piece. On July 28th, 2007 Vaux played their last ever show at the Bluebird Theater in Denver, CO.