Spanky and Our Gang was an American 1960s folk-rock band led by Elaine "Spanky" McFarlane. The band derives its name from Hal Roach's popular Our Gang comedies of the 1930s (known to modern audiences as The Little Rascals). The group was known for its vocal harmonies.

History and work:
The group's eponymous first album was released by Mercury Records on August 1, 1967, and included three popular songs that were released as singles. These were "Sunday Will Never Be the Same" (their biggest hit, which reached number No. 9 on the U.S. Billboard Hot 100 chart in the summer of 1967), followed by "Making Every Minute Count" (reached No. 31) and "Lazy Day" (reached No 14). Both "Sunday Will Never Be The Same" and "Lazy Day" sold over one million copies. "Sunday Will Never Be the Same" was written by Terry Cashman and Gene Pistilli. In an interview by Cashman with the Songfacts website, he revealed that the song was originally written as a ballad, however, the group "changed it, and they added the vocal, 'Ba-da-da-da-da,' which was a great hook."
Their second album, Like to Get to Know You, was released in April 1968. Two singles were released: "Sunday Mornin'" in the winter, which reached No. 30 on February 10-17, 1968, and "Like to Get to Know You" in the spring, which reached No. 17 on June 8, 1968. The latter single's B-side, "Three Ways From Tomorrow", also received considerable airplay. The album included their rendition of "Stardust", and a version of "Everybody's Talkin'", best known as a hit single for Harry Nilsson and the theme song for the movie Midnight Cowboy.
"Give a Damn" was released as a single in Summer 1968. In spite of not receiving airplay in several markets because of the curse word in its title - and because it was a comment on racial equality that became the theme song for the New York Urban Coalition - the song became a regional hit where released and overall made No. 43. It was also performed live on an episode of The Smothers Brothers Comedy Hour, resulting in CBS' Standards and Practices division receiving numerous complaints about the song's title being used during "family viewing hours". One such complaint reportedly came from President Richard Nixon. "Give a Damn" would become John Lindsay's campaign song during his successful run for mayor of New York.
On Halloween 1968, the group's lead guitarist Malcolm Hale died of carbon monoxide poisoning due to a faulty heating system. (Hale's death has also been ascribed to bronchopneumonia). This was a devastating blow to the group. The multi-instrumentalist did much of the arranging and pretty well kept the band together. Hale's death, along with the group's satisfaction over what they had achieved already, led to the decision to disband early in 1969. Mercury released a third album, Anything You Choose b/w Without Rhyme or Reason, in January 1969. It contained two popular songs, the previous summer's hit "Give a Damn" and "Yesterday's Rain". The group briefly reformed in 1975 and recorded an album (Change) for the Epic label.
After the band dissolved, McFarlane had some success as a solo artist. She toured with the New Mamas and The Papas, largely singing the parts which had been those performed by Cass Elliot. She was most recently seen April 2011 on stage in Ferndale Repertory Theatre's production of South Pacific portraying "Bloody Mary".

Later releases:
Because of its continued popularity, Mercury released album collections of the band's greatest hits in 1969 (Spanky's Greatest Hit(s)), 1994 (Give a Damn), and 2005 (Spanky and Our Gang). In addition, Hip-O-Select issued a limited edition anthology of its complete Mercury recordings including never-released recordings and extensive liner notes. 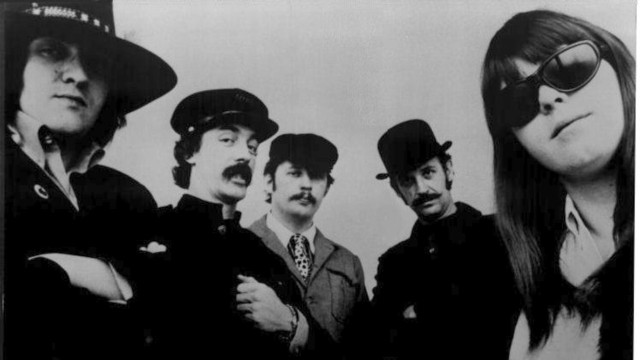