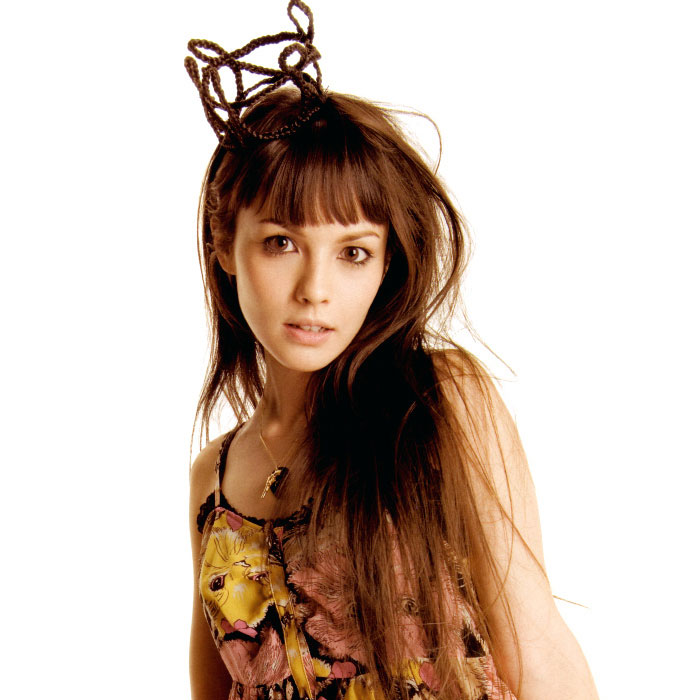 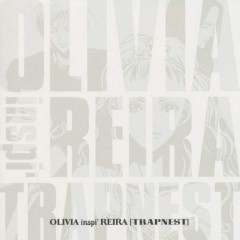 Olivia Lufkin (born December 9, 1979), professionally known as OLIVIA, is a Japanese American bilingual singer-songwriter. She is the daughter of an American father and a Japanese mother. Her two younger siblings are Jeffrey Lufkin, who is a musician she collaborates regularly with and Caroline Lufkin, who is an independent musician. Lufkin began her solo career after being in the Japanese girl group D&D. She gained mainstream success in 2006 after creating songs for the fictional band Trapnest under the alias of Olivia Inspi' Reira (Trapnest), and the songs were used for the popular anime adaptation of Nana.

Early beginnings:
Olivia Lufkin was born on December 9, 1979 in Okinawa, Japan. In 1982, she moved to San Diego, California then back to Okinawa. Olivia later moved again to North Carolina for two years before moving back to Okinawa.
Olivia was discovered by the director of "Rising Productions" (Vision Factory) while attending the Okinawa Actors' School, subsequently signing to Avex Trax as part of the Japanese idol group D&D. Famed producer Tetsuya Komuro heard of Olivia one day and decided that she would be perfect for a project in which he was planning along with Jean Michel Jarre. The project was to create the theme song for the 1998 FIFA World Cup entitled Together Now. The single was released a month after D&D's first and only album. It was then decided that D&D would disband and be separated into two different groups: 'Olivia' as Olivia's solo-project and Aya & Chika as Aya & Chika from D&D.

1999-2002: Solo beginnings:
In contrast to her work with D&D, her first single, "I.L.Y. (Yokubō)", had a driving pop rock sound. While she did not write her first two singles, which were composed and produced by T2ya, she wrote her third single, "Dear Angel", and most of her singles since then.
In 1999 and 2000, Olivia would release six singles, all with a pop-rock sound. Toward the end of 2000, she released her first solo album, Synchronicity, which contained all singles released to date, five previously unheard tracks, and one bonus track. It would peak at the number twenty position on the Oricon Charts.
After a hiatus of more than a year, Olivia began to take control of her career, releasing her seventh single "Sea Me" on December 12, 2001. This single marks her switch to one of Avex Trax's sub-labels, Cutting Edge, from which she continues to release singles and albums. Her releases would become increasingly rare and sporadic from then on, with a Video Clips Collection being issued four months later.
Olivia's next single, "Into the Stars", was planned to be released in July 2002 with an album released at the end of the year. However, plans were changed as the single was postponed until September due to market forces and the album release similarly delayed.

2003-2004: New style:
2003 saw a complete style change with Olivia's music and an onslaught of mini-albums as she began a series of collaborations with her brother, Jeffrey Lufkin. During this time, her music became considerably darker in both style and lyrical content than seen before. Instead of singles, four mini-albums would be released exclusively through Tower Records Japan in Shibuya, Tokyo. These include: Internal Bleeding Strawberry, Merry&Hell Go Round, Comatose Bunny Butcher and The Return of the Chlorophyll Bunny.
Alongside this, Olivia decided to launch a rare-items fashion label called Black Daisy Ville with her friend Friedia Niimura (Rin Kozue). This fashion line would continue until the summer of 2004 in which a line of clothes and items were released. Friedia later moved to United States and the line discontinued.
Then in 2004, she released her second album The Lost Lolli. This album primarily featured the best material from her four mini-albums and introduced two new tracks, "Alone in Our Castle" and "Fake Flowers" as well as two re-arrangements. The album was released nation-wide with a limited first press version available at Tower Records Japan. "SpiderSpins (Lost Lolli Mix)" would be used as a promotional radio single and video for the release. The Lost Lolli would only peak at #111 on the Oricon Charts. However, despite the moderate success of the album, Avex Trax released an overseas version of this album, reflecting Olivia's increasing success outside of Japan. Typically, only chart-topping artists release overseas versions of their albums.

2005-2006: Interim and return:
After releasing The Lost Lolli, Olivia went on an unofficial hiatus except for a performance at the "Halloween of the Living Dead" concert hosted by Hyde on October 30, 2005. Although, she would continue to work as a model in fashion magazines.
During March 2006, it was announced that Olivia would once again be releasing music in the Japanese music industry. She would provide vocals for the lead vocalist Reira Serizawa in the fictional band Trapnest as a part of the anime adaptation of Nana. She would produce songs for the anime under the alias Olivia Inspi' Reira (Trapnest) alongside fellow Avex artist, Anna Tsuchiya, who plays the role of Nana Osaki, the vocalist for Trapnest's rival band Black Stones.
The manga's author, Ai Yazawa, asked Olivia to sing for the anime when a staff member at Avex gave her a copy of Olivia's singles "Sea Me" and "Into the Stars". It is reported that she exclaimed, "It can only be her!" when she first heard the music. "A Little Pain" would be Olivia's first release for this role in which she first made the general theme to the lyrics, then wrote the song in English. Later on, the lyrics would be changed to Japanese. The single is about "Reira's loneliness, pain and strength," as Olivia found that she could relate well to the character.
Olivia has said that her musical expression has now changed, that the hiatus was because at the time of The Lost Lolli's release, she was "feeling pretty depressed", and "started to notice and realize a lot of her faults"and that her style "has gotten a lot more detailed", it's "pleasing to the ear" and "a lot cooler". She had to do a lot of research into Reira's character, as she "never really read manga". "A Little Pain" is specifically tailored to the point of view of Reira. She states, "It was fun to sing as another person. Like an actress. I wrote the lyrics with the image that Reira looked to herself and wrote it. But because she's Reira she has to help all around her and that's why it seems as though she sings for everyone, but really she sings for herself. I wrote it with that idea in my mind."
When "A Little Pain" was first released, it reached a position of number eight on the Oricon Charts, her first top ten position, and two positions below Anna Tsuchiya's single, "Rose", which had been released on the same day. After the second week, this single had outsold the total sales for her debut single, "I.L.Y. (Yokubō)" which was her highest selling single to date at the time.
Olivia would continue to release Nana-related material throughout 2006. The next opening and ending theme songs used after Anna Tsuchiya's "Rose" and Olivia's "A Little Pain" were both songs by Olivia. The single "Wish/Starless Night", was released in October and peaked at number seven on the Oricon Charts. Following the success of these releases, Olivia's first US appearance was scheduled for the Asian entertainment convention Pacific Media Expo held in Los Angeles, California in October 2006.

2007-present: Modest success:
On January 17, 2007, The Cloudy Dreamer was released in CD and CD+DVD formats. The album debuted at number fifteen on the Oricon Weekly Charts - her highest ranking album to date. In addition to the singles previously released, the mini-album also featured the songs: "Dream Catcher", which was used as the ending theme for the live action television drama series of Jigoku Shōjo, "If You Only Knew", which was used as the main theme for the Korean drama The Snow Queen, as well as an English version of "Wish". Later in February, the compilation album Olivia Inspi' Reira (Trapnest) was released featuring the singles from the Nana and some new songs.
Nana Best, another compilation album, was released shortly thereafter. This album featured the hit songs from the anime and one unreleased song by both Olivia and Anna Tsuchiya. Olivia and Anna would go on to perform these songs together live at Shibuya-AX in March 2007.

On July 6, 2007, Olivia held a concert in Paris, France at the popular venue, La Locomotive singing songs from Olivia Inspi' Reira (Trapnest), The Lost Lolli and The Cloudy Dreamer. She also made a special guest appearance at the Japan Expo on July 6 and 7.
A new song, "Bleeding Heart", which was a collaborative effort with her brother, Jeffrey Lufkin, was produced for the Vision Factory compilation album Flower Festival: Vision Factory Presents. The compilation album contains songs set to the theme of 'flowers' by various other artists such as Lead, Fungo, and Hiro. It was released on March 19, 2008.
Olivia released her sixth mini album, Trinka Trinka, on September 17. It featured a new song called "Rain", which was used as the second ending theme to K-tai Investigator 7. The album consisted of all new material. There was much confusion about the track line up as a few of the track titles were changed such as the highly anticipated song "Real Love" which was premiered during her concert in Paris with was renamed to "Your Smile" and quite possible "I'm So Excited" was retitled as "Trinka Trinka". Following the release of this mini album, Olivia held a live show on October 24, 2008 at Shibuya Womb in which over 600 fans attended.
On December 30, 2008, Olivia participated in a duo showcase with Inoran in which she covered a few of his songs such as Owl's Tear and Monsoon Baby. They also talked about their new collaboration single which was released on April 15, 2009. It was titled "Sailing Free" and it served as the theme song to a new game of the saga Sengoku Basara, called "Sengoku Basara Battle Heroes". "Sailing Free" was also Olivia's first single in three years.
Trinka Trinka was re-released in France which included "Sailing Free" and it's b-sides (Love Love Love and Undress) along with a bonus track which was revealed to be World's End Girlfriend's remix of "If You Only Knew". The bonus track had previously been featured on Olivia's Myspace page. Following this re-release of Trinka Trinka, Olivia remained fairly quiet throughout early 2010. It was then announced that Olivia will give a concert for the visitors of the German Anime convention Connichi 2010. The Connichi 2010 took place at the Kongress Palais of Kassel (former Stadthalle Kassel) from September 10-12, 2010. Olivia talked about a new release, a Greatest Hits album which was released on October 13, 2010. Due to the release there was much concern that Olivia was retiring from the musical business but through her official Facebook page, Olivia assured her fans that she was not quitting and that she is planning to release new material after the release of her Greatest Hits album. The Greatest Hits album included two brand new tracks called "Sunlight" and "Be Your Friend". These tracks saw another turn in the direction of Olivia's musical style; a combination of Trinka Trinka's pop style and The Lost Lolli's dark electronica.
Olivia's latest live appearance was at UppCon 2011 and after that, she took a hiatus from the music. She took up a job in a kindergarten in Okinawa, and thereafter, moved to California.
In 2012, She married musician Owen Vallis and on October 14, 2013, Olivia posted and shared an entry on her blog and Facebook page relaying that she and her husband are currently expecting their first child, a son named Atlas, due January 2014. Atlas was born on January 13, 2014.