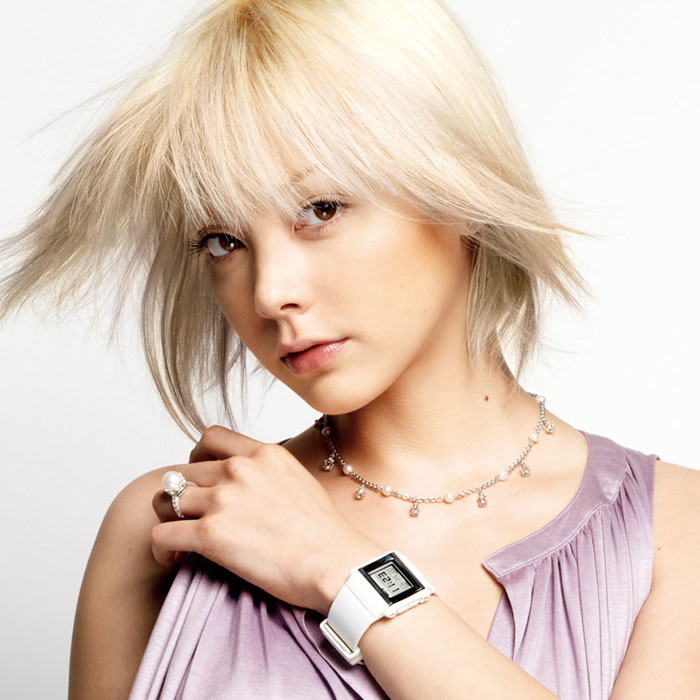 Anna Tsuchiya (土屋 アンナ, Tsuchiya Anna, born March 11, 1984) is a Japanese singer, actress, and semi-retired model. Since 2005, she is primarily known as a singer. She has written and recorded some of her music in English.

Early life:
Tsuchiya was born in Tokyo to a Japanese mother and an American father of Polish descent from Buffalo, New York. In her earliest years, she spoke English and Japanese. Tsuchiya's parents divorced when she was seven. She has an older sister, Angela.

Modeling career:
Tsuchiya's modeling career began at the age of fourteen after her older sister Angela, a former fashion model, suggested it. She entered her sister's former agency, and was picked up by an agent who specialized in magazine-modeling, and her first jobs consisted of modeling for an open collection in Kobe and for Japanese Seventeen in 1998. Demand for her grew, and by 2002, she was doing television ads for Uniqlo and Edwin.
Tsuchiya spent her mid-teens modeling, and made friends, notably Yoshika, and soon she began to stay at their apartments. It has been reported that she also began smoking and drinking around this time.

Inspiration for "Ichigo":
Her best known role in acting was as "Ichigo Shirayuri" - a rural-delinquent biker-gang girl turned fashion model - in the 2004 movie Kamikaze Girls. Ichigo as a model was portrayed as one with tendencies for violent behavior, delinquency, yankee-ish, homophobic machismo, with a penchant for rural accents and same-sex lovers. This Blue Ribbon Award-winning role, quite different from one in the original work written by author and designer Nobara Takemoto, was loosely based on Tsuchiya's actual story which she later revealed after the movie's release.
During her time as a model, she tried hard to lose weight. At 1.67 meters (5 feet 6 inches) and 44 kilograms (97 pounds), she was considered overweight for a model in Japan. At this time, she experienced mental and physical agony, being bullied by other models. According to a contemporary, those who teased Tsuchiya had recognized her as "tough" while other "overweight" models, like Kaela Kimura, were always called by extremely vulgar nicknames. Just a few, but some, praised Tsuchiya afterwards, saying things like "well done." When she was fifteen, she awoke one morning starving to find that she could not move her legs, a result of severe malnutrition, and she was forced to drag herself by hand to the refrigerator.
Tsuchiya has also confessed that when drunk, she often picked on "fatter" models herself, especially foreigners who came to work for fashion magazines such as Elle, Vogue, SPUR and Pre Numéro, publications she considered sub-stream. These models, unable to understand Japanese, were oblivious to Tsuchiya's abuse and always just smiled back to whatever what she said. Tsuchiya would also often speak to them in English using offensive words related to obesity, as many models in their teens do, and would often further assault them when they reacted negatively to her verbal abuse.

Retirement:
Tsuchiya retired from modeling at 18. She has said that she realized she could no longer compete with "gifted ones" like Emi Suzuki. She remains in demand for fashion and lifestyle magazines like Kera, Soup, and Zipper.
On June 2, 2007, Tsuchiya attended the official retirement ceremony for the sumo wrestler Kyokushuzan held in Ryogoku Kokugikan and presenting him with a bouquet, and appeared in his memorial photobook released on June 4, 2007.

Use of dialects:
Although born and raised in Tokyo, she sometimes uses Kyushu or Okinawa slang and speaks in southern dialects especially when she is drunk and on the radio. She has explained that the majority of models she encountered were from the southern islands or the north, so she learned slang from them. This helped the development of her character Ichigo, the Bōsōzoku delinquent, in Kamikaze Girls.

Music career:
Tsuchiya sang in her school choir and has been involved in the music industry since age 16. At 18, she terminated her contract with Japanese Seventeen, and supposedly decided to leave show business altogether. However, after an offer by former Oblivion Dust member K.A.Z, she invested in her music career In mid-2002, she form with K.A.Z a punk-rock duo Spin Aqua. Tsuchiya has said her influences have changed over the years, from Whitney Houston, Diana Ross, Cyndi Lauper, Bette Midler and Mariah Carey, to Bon Jovi and Guns N' Roses.
Soon after she debuted as a singer, she was sometimes dubbed "The Second Nanase" because of her resemblance to Nanase Aikawa, a popular '90s singer. Spin Aqua released three singles, one album, and a video collection, without commercial success. In 2004, Tsuchiya became pregnant, and the group disbanded.
In 2005, Tsuchiya announced plans to begin a solo career. On August 24 of that year, she released her first mini-album, Taste My Beat on Avex Group's sub-label, Mad Pray Records. Her first single was "Change Your Life", followed by a second single entitled "Slap that Naughty Body" / "My Fate". After these releases, Tsuchiya released her first remix album, Taste My Xxxremixxxxxxx!!!!!!!! Beat Life! Her third single, "Rose" was used as the opening theme for Nana; Olivia Lufkin's "Starless Night" was used as the ending theme. This boosted Tsuchiya's music career, as "Rose" reached No. 6 on the Oricon charts and become her first Top Ten Hit.
In July 2006, Tsuchiya made her first overseas appearance at the Japan Expo in Paris, France. During this time, to boost her popularity, Tsuchiya also debuted her album Strip Me?
In early 2007, after a short hiatus, she returned to the music scene with a new single called "Kuroi Namida". This song would also be featured in the Nana anime. This was followed by the third Nana anime opening single, "Lucy" in early February. This would also directly precede a second full-length Nana album, titled Anna Tsuchiya Inspi' Nana (Black Stones) which contained singles from the show and new songs. A quasi-soundtrack album called Nana Best was then released, which included popular and unreleased songs by both her and Olivia Lufkin from the TV series. In March 2007, both Lufkin's and Tsuchiya's songs from these albums were played at Shibuya AX in Tokyo in March 2007. On June 30 of the same year, Tsuchiya performed at Anime Expo in the Long Beach, California, followed performances on July 27 at Pentaport Rock Festival in South Korea, and on July 29 at Formoz Festival in Taiwan. Called Tsichiya's "World Fez Tour", the series of performances concluded with a summer tour in Japan, which included a performance for a second time at Summer Sonic Festival. Shortly after the conclusion of the tour, Tsuchiya released her single "Bubble Trip" / "Sweet Sweet Song" on August 1.
The single "Cocoon" was released on January 30, 2008, followed in June by the single "Crazy World" which was a collaboration with the Japanese EMI Music recording artist AI. Tsuchiya released a third single in September 2008, "Virgin Cat", which was used to promote the show The L Word in Japan.
In October 2008, she released her third full length album, the sexually explicit Nudy Show!.
In 2009 Tsuchiya performed a set with a full orchestra at the New Classic Gig in Tokyo, revealing herself a fan of Chopin and his Revolutionary Etude in particular. The orchestra included 70 members and the show was broadcast in 38 countries.
In May 2010, Tsuchiya's remix of her Nudy Show! album was released titled Nudy xxxremixxxxxxx!!!!!!!! Show!.
Tsuchiya's song 'Guilty' was featured in the ending credits of the film Resident Evil: Degeneration.
On November 23, 2011 she released "Switch On!" her thirteenth single. It is the opening theme for the Kamen Rider Series Kamen Rider Fourze. She decided to record the song because her son was a fan of the previous series Kamen Rider OOO. She herself watched earlier versions while growing up. On August 22, 2012 she released another Kamen Rider single: Voyagers, the theme song to Kamen Rider Fourze the Movie: Space, Here We Come!.

Acting career:
Tsuchiya made her acting debut in 2004 in Novala Takemoto's adapted hit Kamikaze Girls as the girl biker punk yankī "Ichigo Shirayuri". This role brought her both immediate attention and critical success, with Tsuchiya winning several awards in Japan.
Tsuchiya's success in acting continued with various movie performances and appearances in dramas such as Katsuhito Ishii's The Taste of Tea which played at Cannes, the 2007 live-action remake of Dororo and as the voice of Lindsay Lohan's character "Maggie Peyton" in the Japanese dub of Herbie: Fully Loaded. In February 2007's Sakuran she played the rebellious but beautiful courtesan Kiyoha in a live action adaptation of the manga.
Her latest performance in a film is starring in the live-action adaptation of the manga The Legend of Kamui.
In addition to acting, she has also been known for her impersonation skills, of many martial artists and wrestlers, most notably Wanderlei Silva, Melvin Manhoef and Jun Kasai.

Personal life:
In 2004, Tsuchiya announced her engagement to model and actor Joshua Niimura, the younger brother of model Friedia Niimura (Rin Kozue). On November 19, 2004, Tsuchiya gave birth to their first child, a son named Sky (澄海, Sukai) who is featured in a photobook with his mother, titled, Happy Days - Anna, Mama ni Naru!. In July 2006, it was announced that Tsuchiya and Niimura had divorced. In May 2008, Niimura died of heart failure at the age of 25.
In September 2009, Tsuchiya wrote on her blog that she was pregnant and had married her long-time stylist, Yamato Kikuchi, three years her senior. The two had begun dating in 2007. On March 26, 2010, Tsuchiya gave birth to her second son, Simba (心羽, Shinba).

Controversy:
In a 2008 interview in the The Japan Times, Tsuchiya explained: "It is cool being wild and broken-down, but drinking at nighttime is enough for me. I believe when you make rock music, it might not be cool if you behave not so cleverly. Actually, I've been rather earnest. When I drink a bit, I can get crazy, but not too much. The happiest thing for me is my family."
Tsuchiya often describes herself as a nasty person. On the other hand, she has been referred to as a very good-hearted and open-minded person even in reference to larger women. 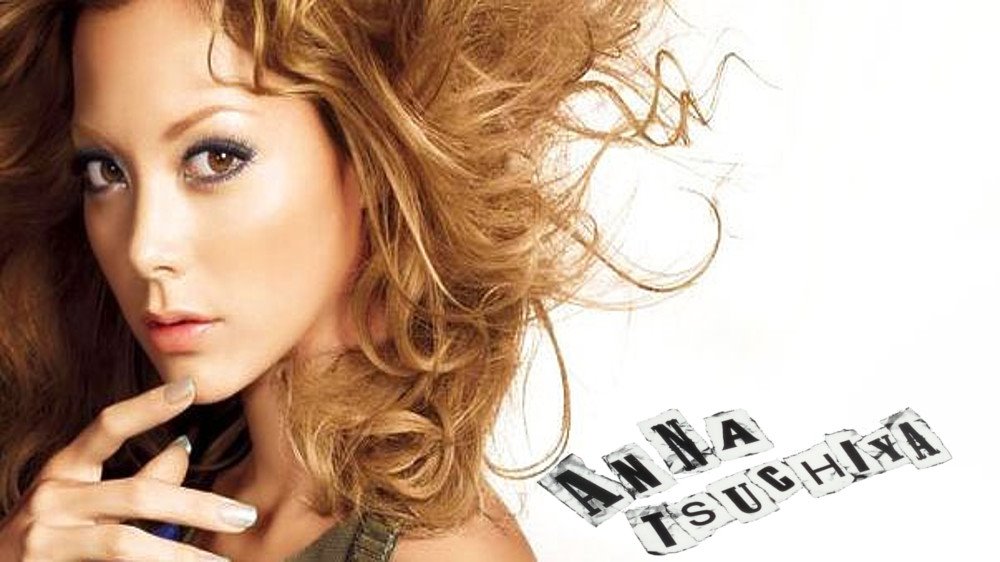 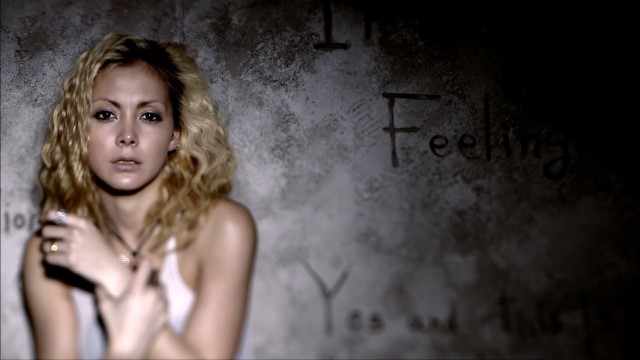